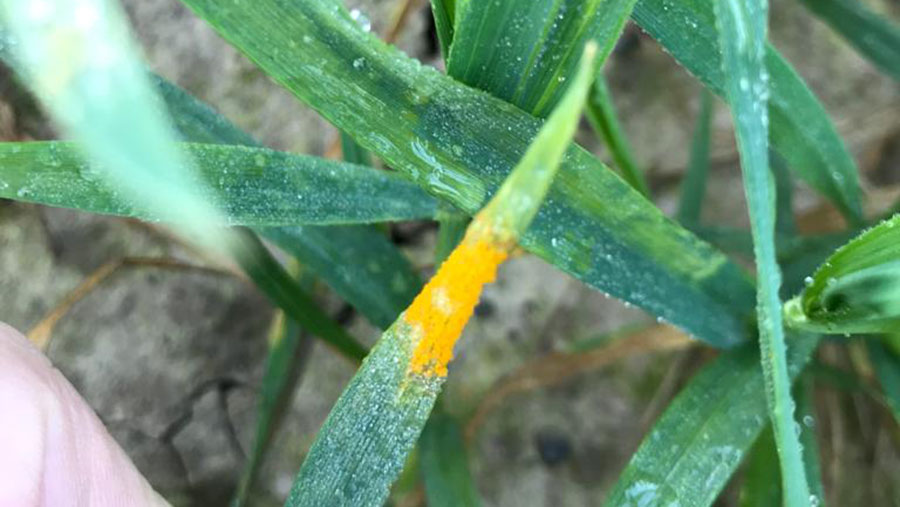 Yellow rust is being seen in winter wheat crops as far west as Herefordshire as the yield-hitting foliar disease is being seen further outside its eastern heartland and into areas often more concerned with wet-loving septoria.

A mild winter and new races of yellow rust, together with a plethora of late-drilled thin crops, is helping the disease spread to western counties including Worcestershire, Gloucestershire, Dorset and Somerset.

The rust disease thrives in drier climates, and in the current weather of warm days and cool nights has been observed along the east coast of Britain from Kent up into eastern Scotland.

Jon Allard, at agronomy group Frontier, says he is seeing the disease in wheat crops around Ross-on-Wye, Hereford and Ledbury on wheat varieties such as Graham and Gleam.

“We are seeing it mainly on late-sown wheats, with the current mild and damp conditions creating a good micro-climate for the disease,” he tells Farmers Weekly.

Many growers have been using azole fungicides, such as tebuconazole or epoxiconazole, or a strobilurin to control the disease as soon as it is seen, or in their early T0 fungicide sprays.

As winter wheat crops now come up to the T1 spray timing, Mr Allard, who is the group’s regional agronomy manager for the south and west of England, says he will be looking to apply an azole and a strobilurin alongside an SDHI.

Septoria is in the base of many wheat crops, but with 8-12 mm of rain over the weekend, the threat from this wet-loving disease is growing, he adds.

Andrew Goodinson, agronomist at advisory group Hutchinsons for Herefordshire and the surrounding area, says he is seeing yellow rust in crops drilled just before Christmas on varieties such as Gleam and Skyscraper.

“We are seeing yellow rust in about one field in every seven to eight, and across all wheat varieties,” he says.

Mr Goodinson has been advising the use of tebuconazole for early control and is looking to use an azole-strobilurin-multisite fungicide mix at T1 on cleaner varieties, and adding an SDHI for the more disease prone varieties.

Further south, agronomist Todd Jex has seen the disease on a crop of late November-drilled Skyfall on the Dorset-Somerset border in an area where he very rarely sees the disease.

Skyfall is particularly prone to yellow rust. Wheat varieties are assessed on a 1-to-9 scale for disease resistance in the AHDB Recommended List, where 1 is very susceptible and 9 shows good resistance. Skyfall is rated a 5 compared with Gleam (7), Graham (8). Skyscraper (8)

Mr Jex, who works for the advisory group Agrii, plans to use an azole-strobilurin fungicide mix at T1, with no “big” SDHI mixes envisaged. He will only use one of the older SDHIs on crops at risk from septoria.