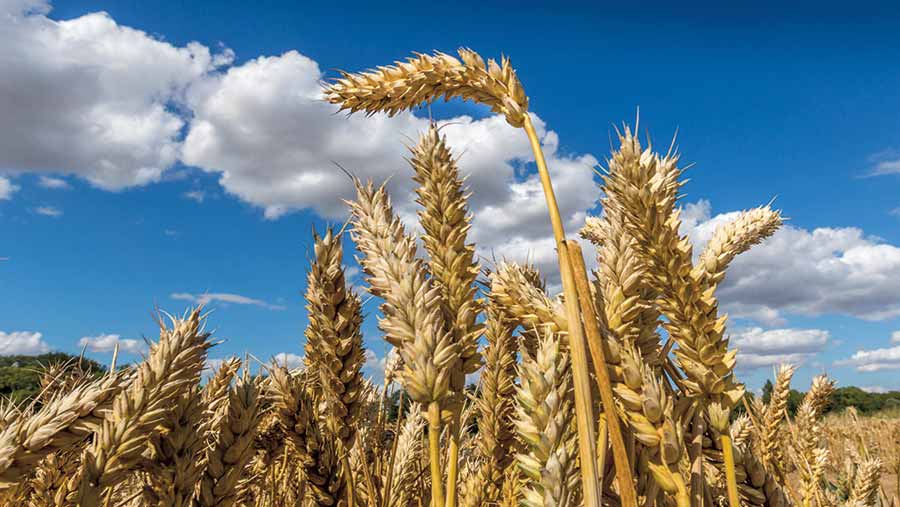 Jim Farquharson’s formula of feeding his wheat crops and keeping them healthy has worked a treat, with one of his bumper breadmaking varieties yielding a shade under 14t/ha.

His light, chalky Dorset soils produced some stunning yields last summer. Top of the pile was a crop of Crusoe at 13.8t/ha, which cost less than £50/t to grow in terms of variable costs.

“Being pro-active is key, so we feed the crop through the season to keep it healthy and stay ahead of any disease,” he tells the Farmers Weekly.

See also: Growers make the most of fertile soils to achieve bumper yields

His thin soils are not inherently fertile, averaging a depth of only 30cm before you hit solid chalk, so they need adequate nutrition throughout the season and organic matter to grow top-yielding crops.

This is especially important as his calcium-rich soils lock up phosphate, manganese, copper and zinc, and need a good trickle of these nutrients to make crops really thrive.

His harvest, comprising predominantly Crusoe, came in with an average yield of 12.76t/ha, while one field of fellow breadmaker Skyfall managed 12.09t/ha.

“Certainly the long, cool grain-filling period helped last season and so did our chalky soils, which act like a sponge to conserve moisture,” he says.

Most of the Crusoe was cut before summer rains hit Dorset and it easily met breadmaking specification.

The top-yielding Crusoe field of 9ha gave a grain protein content of 13.3%, specific weight of 87kg/hl, and a hagberg of 325. This compared with traditional industry standards of 13, 76 and 250.

Some Crusoe and the field of Skyfall saw hagberg levels fall dramatically after the summer rain, but Mr Farquharson has not lost faith in Skyfall.

This season’s 170ha winter wheat crop is broadly a 50-50 mix of Crusoe and Skyfall, with one field of Lili, and he is hoping for more high yields.

“You can’t play with septoria down here in Dorset or you will get burnt,” Mr Jex says.

So how did Mr Farquharson and Mr Jex manage to achieve a bumper milling wheat yield from thin soils with a big threat of septoria in the wetter West? 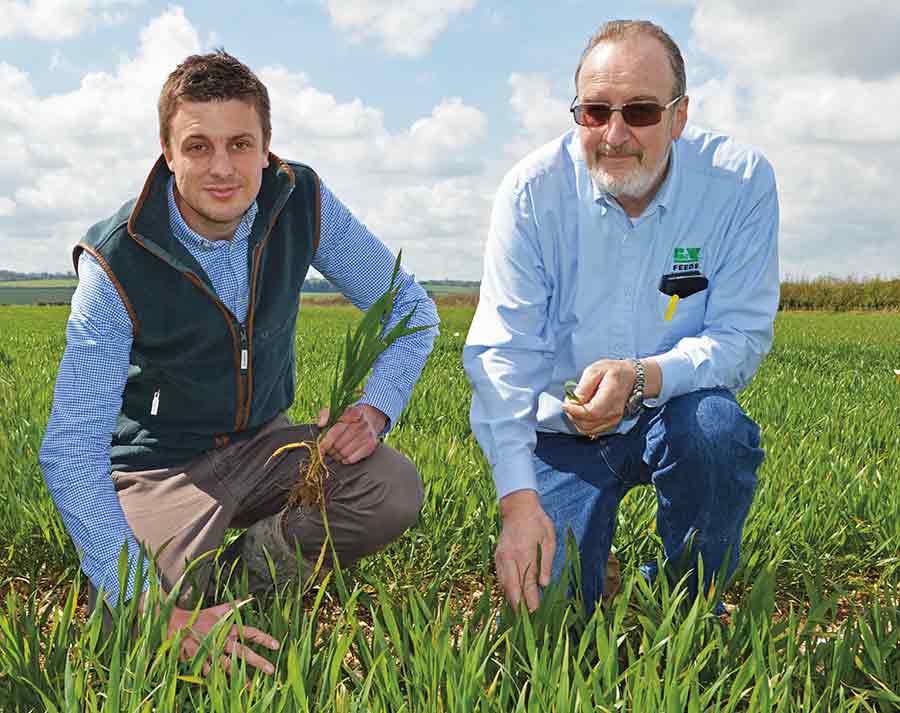 Drilling is delayed as long as practically possible to give time to control sterile brome and also to reduce the risk of lush crops increasing the likelihood of early septoria infection.

Wheat follows oilseed rape in a four to five year rotation, with spring and winter barley, linseed and spring beans in the cropping plan.

Two stale seed-beds are usually  created with a stubble rake before being sprayed off with glyphosate. Then a minimum cultivation disc-tine-roller combination creates the seed-bed.

Drilling is usually done in the last week of September and into the first week of October. A seed rate of 300 seeds/sq m is used to aim for a population of 500-600 ears/sq m by harvest.

A pre-emergence flufenacet-based herbicide is used, while variable rates of phosphate and potash are applied following soil mapping.

A synthetic pyrethroid is spayed in the autumn to protect against barley yellow dwarf virus, as an earlier seed dressing runs out of steam. Manganese is added to this insecticide application to help with rooting and tiller survival.

Early crop establishment is very much based on controlling slugs and sterile brome to get the wheat off to the best possible start.

Septoria is key in Mr Jex’s area of Dorset and south Wiltshire and he recommends choosing a wheat variety with an AHDB septoria resistance rating of at least 6, something like Crusoe, Skyfall or Siskin.

The seed rate is kept relatively low to avoid creating a crop that is too thick. The nitrogen policy is to keep a good, open canopy to let light in, but try to keep disease out. Delayed drilling also helps cut the septoria risk.

Typical fungicide costs are on the high side at £130/ha, as there is a danger of cutting rates with such a big threat from septoria. Last year, the fungicide programme included:

The spring nutrition programme is based on holding back on early nitrogen fertiliser to create an open canopy to let the light in and boost grain size.

A total nitrogen use of 280kg/ha is applied, along with a separate solid sulphur and magnesium application in mid-March.

The top-yielding Crusoe field had largely the same inputs as the rest of the farm’s winter wheat crop, with average variable costs of £664/ha for seed, sprays and fertiliser.