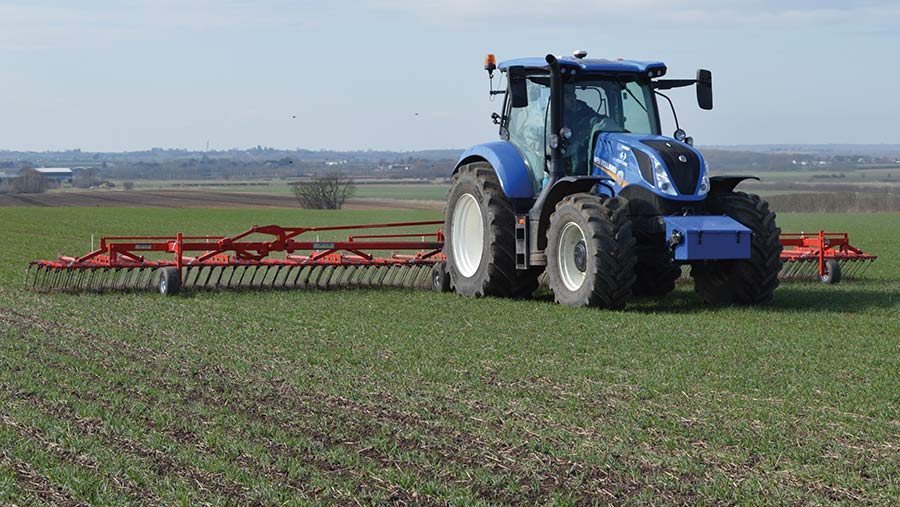 Essex grower Richard Carr often hits high 14% protein levels with his milling wheat, to earn a useful extra premium on his heavy fertile land near the coast which has grown grain since Saxon times.

If there is enough spring rainfall and good sunshine through the summer, he can achieve this extra-high protein content in this the driest corner of Britain.

To achieve this, he uses a good rotation rather than excessive doses of expensive nitrogen fertiliser.

His soils and climate suit milling wheats and local mills are eager buyers, with his five-year average protein contents just below 14%.

This earns him a little extra compared with returns from the traditional requirement from breadmakers for 13% protein wheat.

With food security racing to the top of the farming agenda amid the conflict in Ukraine, his wheats are likely to continue to be in high demand from millers who normally turn to Canadian and German wheats to fill this high-protein spot.

“We have never not hit 13% protein on the farm, and Hagberg levels are not normally a problem,” he tells Farmers Weekly. 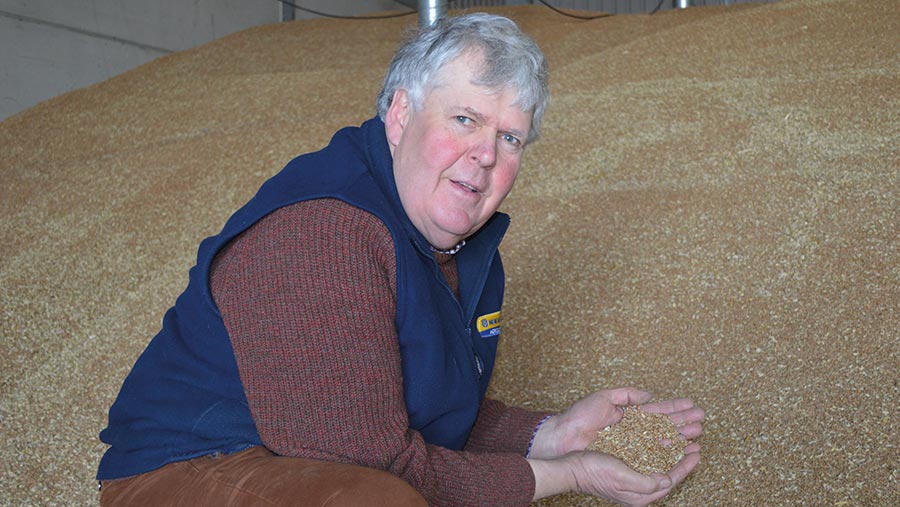 His best-ever milling wheat year was in 2020 when rainfall over Easter gave the crops enough moisture to turn in a yield of nearly 12.5t/ha at 14% protein.

The following one crop gave 14.1% protein to win him silver at the Milling Wheat Quality Awards in the Yield Enhancement Network (YEN) competition run by crop consultant Adas.

“With enough spring rain and good summer sunshine we can get to 14% protein, as we do not see excessive summer heat nor excess cold, being so close to the coast,” he adds.

A good rotation also helps on his 220ha Lawling Hall Farm, some 10 miles east of Chelmsford.

With three continuous years of lucerne, and also winter beans, winter naked oats and spring linseed in the rotation, he only grows first wheats, which account for close to 50% of his land.

The farm has grown milling wheat for as long as he can remember on his heavy silty clay soils, with rainfall of 450-475mm.

It is this low rainfall, restricting yields, that encouraged the farm to grow milling wheats to earn a premium through higher protein levels.

It was beaten in the YEN competition only by Yorkshire grower Peter Trickett, who’s sample of Crusoe showed slightly better baking qualities.

Mr Carr’s award-winning crop followed winter oats, and after the oats straw was baled the ground was stubble raked to level out any remaining straw and chaff, and control slugs.

It was then minimum-tilled using a disc and subsoiler combination, with the latter tines set down to about 150-175mm.

The wheat crop was drilled on 20 October at a seed rate of 166kg/ha with a Vaderstad disc drill. Mr Carr aims to start drilling on 1 October with the optimum timing being 10-15 October.

Early drilling is avoided due to blackgrass concerns and also because the crops would simply grow too much through the generally mild winters.

His blackgrass strategy is based on solid pre-emergence and post-emergence herbicide control.

Poor control in the spring led him to invest in an Einbock tined weeder, which is pulled through the crop two or three times in the spring and is effective in reducing blackgrass numbers.

A good rotation on his heavy clay soils, with three years of deep-rooting lucerne and a long history of poultry manure use, has seen the soil organic matter climb to 4-6%, and he has now started to try out direct drilling.

With 85% of the land recently drained and mole drainage conducted every six years, the soils are now in a good enough condition for direct drilling.

Some fields that have been no-tilled for five years are showing the benefit in terms of better soils and crops. 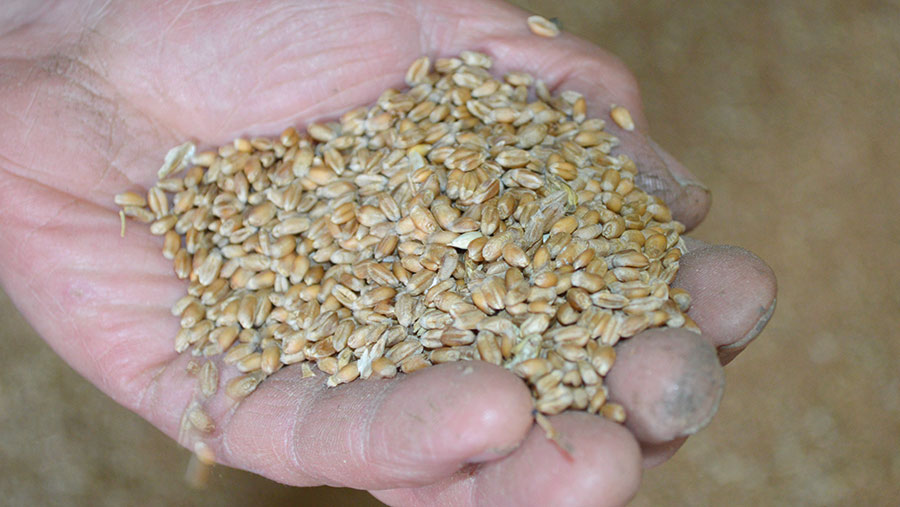 He starts with ammonium sulphate in early March, to also provide sulphur; urea in mid-March as it works better in lower temperatures; and then ammonium nitrogen split equally between mid-April and early May.

The total solid nitrogen amounts to 200kg/ha, and then some 20kg/ha of liquid nitrogen is applied to the wheat ears to boost protein further.

The wheat land is divided 50:50 between the varieties Crusoe and Skyfall and all is grown as first wheats as there is a history of eyespot on the farm so second and third wheats are avoided.

The Skyfall suffered last season from its well-documented susceptibility to yellow rust, while Crusoe managed to escape from its Achilles Heel of brown rust.

In the previous season it was vice versa, with little yellow rust seen while Crusoe suffered from brown rust.

His five-spray fungicide programme was focused on controlling yellow rust early with tebuconazole and the now-banned epoxiconazole.

Late control included tebuconazole and strobilurins to control brown rust, and an additional T1-1/2 of prochloraz to control eyespot.

The farm’s wheat harvest usually starts in late July and is normally finished by 20 August, but last summer’s crops were late maturing in a summer lacking in sunlight, and the winning Crusoe field was not cut until 24 August.

With breadmaking premiums currently about £25/t for 13% wheat, the 14% wheat can earn an extra £3-5/t for the farm, which in the 19th century had a windmill for grinding grain.

Records show grains being produced going back more than 1,000 years

Specific weight is not usually a problem, as Mr Carr says 79-80kg/hl is achievable and levels of 82-84kg/hl were seen in the good harvest of 2020.

For this season, he is again growing Crusoe and Skyfall, but will look to trial areas to see if he can reduce nitrogen usage by 20-30kg/ha and still manage to hit high protein levels.

Soil nitrogen tests have indicated higher-than-normal levels after a generally dry and mild winter, while wheat crops this spring look good with a good yield potential.

“Crops have the potential this year to yield 10-11t/ha, so we will need to feed this potential to get the protein level to 13-14%.” he says. 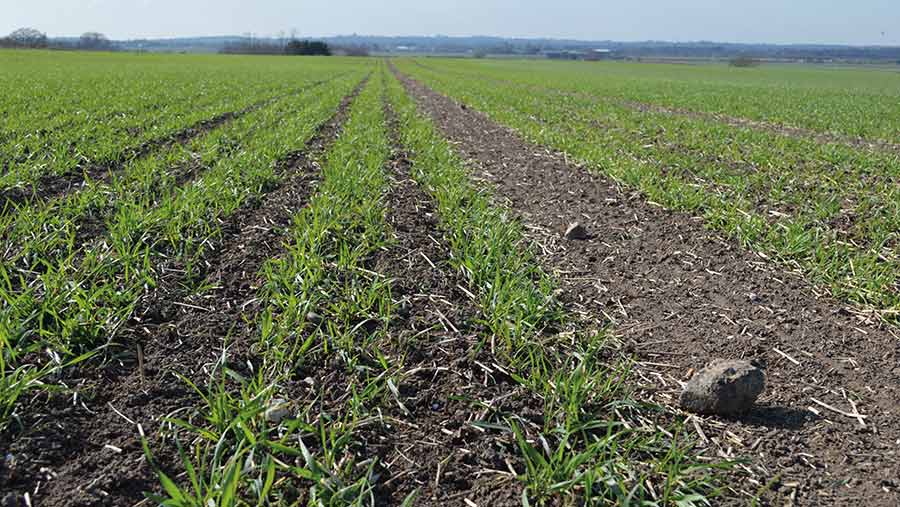