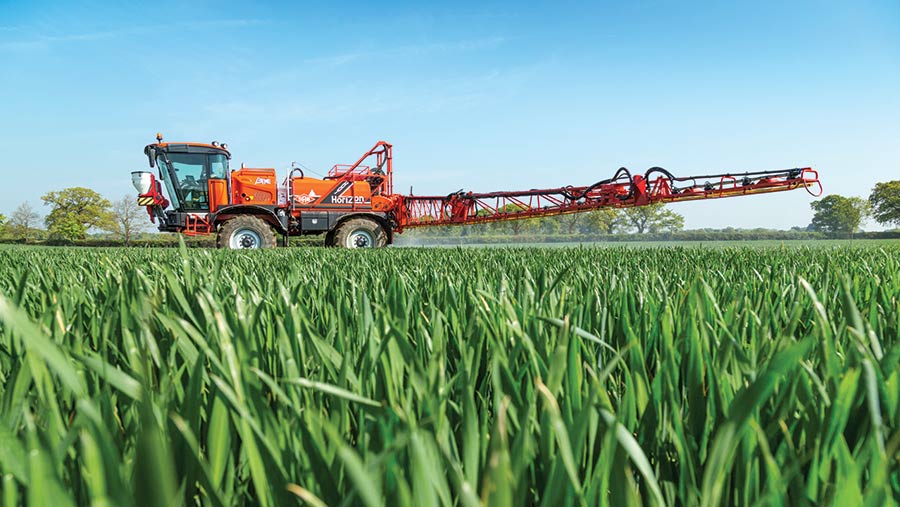 Wheat growers are being urged not to cut back on fungicides on some of their thin, poor-looking crops, as showery weather could soon bring wet-loving septoria disease back with a bang.

Many late-drilled wheat crops have struggled out of the winter, prompting growers to think about cutting back on expensive fungicides as their yield potential is clearly lower.

But some experts argue that even potentially lower-yielding crops can be laid low by disease, and the current dry weather should not lull growers into complacency.

Bill Clark, technical director of crop consultant Niab, says there is plenty of septoria in winter wheat crops and all it needs is showery weather to make the foliar disease rise up from the lower leaves.

“Don’t talk yourself into lower inputs yet, as potentially lower-yielding crops can still see a big response to fungicides,” he says.

See what the situation is in regions across the country:

The current dry weather may help fuel a laid-back approach, as the multisite fungicide chlorothalonil will protect emerging leaves, but a change in the weather may herald the need for the eradicant properties of systemic fungicides, which travel into the leaves of plants, such as azoles and SDHIs.

Much attention has been focused on widespread yellow rust, but while it is fairly easy to control with relatively inexpensive azoles such as tebuconazole and epoxiconazole, the wet-liking septoria is often difficult to eradicate.

“Yellow rust is everywhere, but septoria is out there and if we get showery weather, it will jump,” Mr Clark warns.

The T1 stage is when leaf three on the wheat plant is nearly fully emerged, and often occurs in late April into early May, while T2 is when the final – or flag – leaf is emerged and usually occurs in late May into early June.

With yellow rust around, Mr Clark advises not reducing the SDHI-azole mix below half dose, as the rust active element will be too reduced.

He suggests trying new chemistry, such as Revystar, at T2, but to cut the dose of this more expensive mix to match that of previously used products.

In Scotland, where there are a lot more early-drilled wheat, Fiona Burnett, professor of applied plant pathology at Scotland’s Rural College (SRUC), says the dry and sunny weather is reducing the disease threat, with septoria only found on the lower leaves.

She suggests only using an SDHI, which are at a high risk of resistance developing, where there is a lot of disease present (and especially eyespot). In a low-risk situation, an azole-chlorothalonil approach may be adequate.

“If there are any savings to be made, then T1 could be the time,” says Prof Burnett.

For the T2 flag leaf spray, where the most responsive yield effect can be seen, she suggests following the SDHI-azole approach, and as these sprays in Scotland are likely to come after the ban on chlorothalonil on 20 May, the multisite component is likely to be folpet.

She does suggest that at T2, chlorothalonil may have been “propping” up some of the older SDHI-azole mixes, and suggests growers keep doses high and use the most effective new chemistry.

In the milling wheat heartland of Kent, there is quite a lot of septoria on crops and despite the dry spring, some showers and wind – causing leaf rubbing – will aid the disease’s spread.

Chris Bean, technical director at agronomy group Zantra, is looking to manage the risk sensibly, carefully checking the danger from yellow and brown rust. Growers will struggle with brown rust if not controlled at T0 and T1, he says. 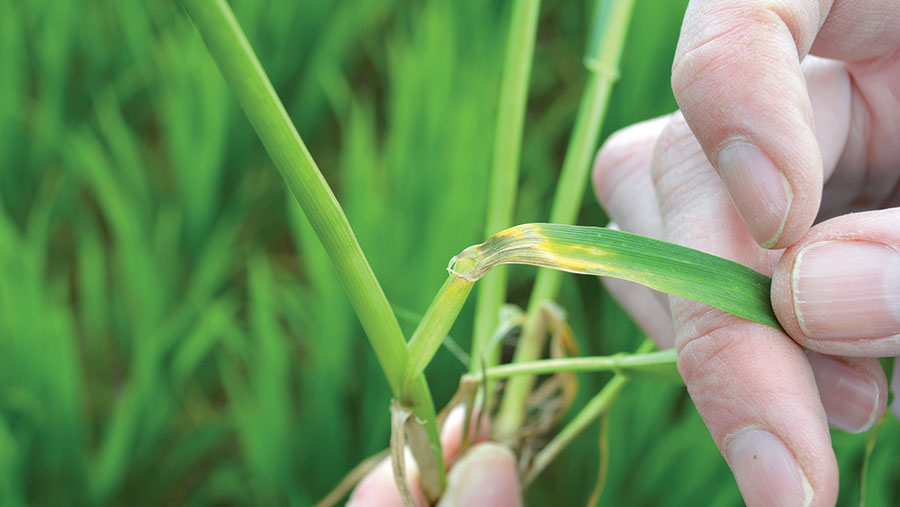 His T1 approach for his area of Kent and south Essex will be an SDHI-azole-chlorothalonil mix, varying the rate according to risk, with strobilurins added to help with rust control and nitrogen update.

“There are a lot of milling wheats down here and strobilurins have been shown to improve the uptake of nitrogen, which translates into protein,” he says.

His T2 strategy will follow a similar approach, focusing on rusts, as all milling varieties saw brown rust in trials last year, with Zyatt and Firefly showing high levels as well as the very susceptible Crusoe.

Yellow rust is the main disease concern in these eastern arable lands, although there is plenty of old septoria in wheat crops after a very wet winter.

Dick Neale, technical manager at agronomy group Hutchinsons, advises growers to look carefully at their crops and make sure they have a rust-active element in their T1 fungicide sprays.

He suggests an SDHI-azole or SDHI-strobilurin route, both with chlorothalonil added, and believes not using an SDHI can be a bit too risky at T1.

“If you do a sensible T1, when you come to T2, you do not have to spend all that much money,” he says.

His approach at T2 would be similar to T1, but growers could drop rates depending on the weather and might omit the chlorothalonil in very dry weather.

Septoria is always the key focus for Nigel Scott, with early-drilled wheat crops of more susceptible varieties, such as Barrel and Kerrin, at risk from the disease.

He says there is a place for SDHIs at T1, especially for their greening effect, helping with rooting and their nitrogen scavenging properties, as well as their fungicidal effect. However, more backward crops may just get an azole-chlorothalonil treatment.

Septoria pressure is lower this year, especially with late-drilled wheat crops in his area of North Yorkshire and Durham, but after such a mild winter and with unknown weather ahead, the risk of this disease is there. 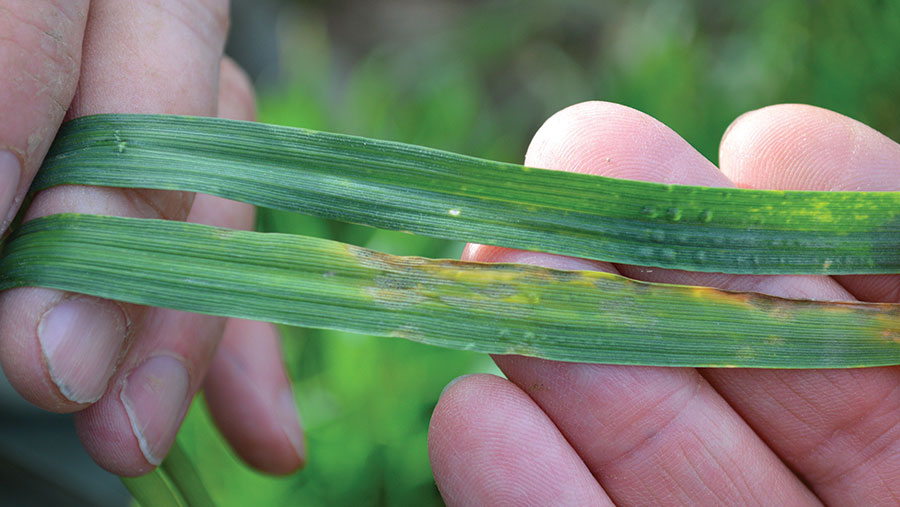 “It will be a decision made on a field-by-field basis. With no rain for more than six weeks, we have to look at spending,” says Mr Scott, who works for agronomy group ProCam.

For T2, the advantages of using an SDHI are clearer, and last year’s experience proved the point, as a dry spring prompted thoughts of cutting back before the heavens open in mid-May.

Long-term disease control is key in northern Scotland, where the wheat harvest stretches well into September and even October, so coping with septoria is vitally important.

Agronomist Alistair Gordon, who covers Morayshire through to the Black Isle and into Easter Ross, is  seeing septoria in the base of wheat crops. There is more disease on the variety Barrel compared with Skyscraper, which is generally clean.

Mr Gordon, who also works for advisory group ProCam, says his approach is based on using two SDHIs, as he says they help reduce plant stress on the region’s dry, light soils.

He plans to use the older SDHI isopyrazam, along with either of the azoles epoxiconazole or prothioconazole at T1, and then a SDHI-azole-strobilurin mix at T2. He hopes this three-way mix will help counter the absence of chlorothalonil at T2.

“The T3 spray is the important spray for us, as there can still be two to three months to harvest, so we need to protect the crop,” he says.

Andrew Goodinson is seeing septoria on the lower leaves of wheat crops that were sown early in his area. Yellow rust is visible on later-drilled crops that went in just before Christmas, while those sown after Christmas are generally clean of disease.

For T1, the agronomist’s approach for “cleaner” varieties in terms of septoria, such as Firefly, will be a low-dose azole plus strobilurin and chlorothalonil approach. He will only look at an older SDHI mix product on the more disease-prone crops.

Strobilurins will help crops due to their physiological greening effect and give extra protection against yellow rust, which has been more prevalent this season, especially on Gleam and Skyscraper. 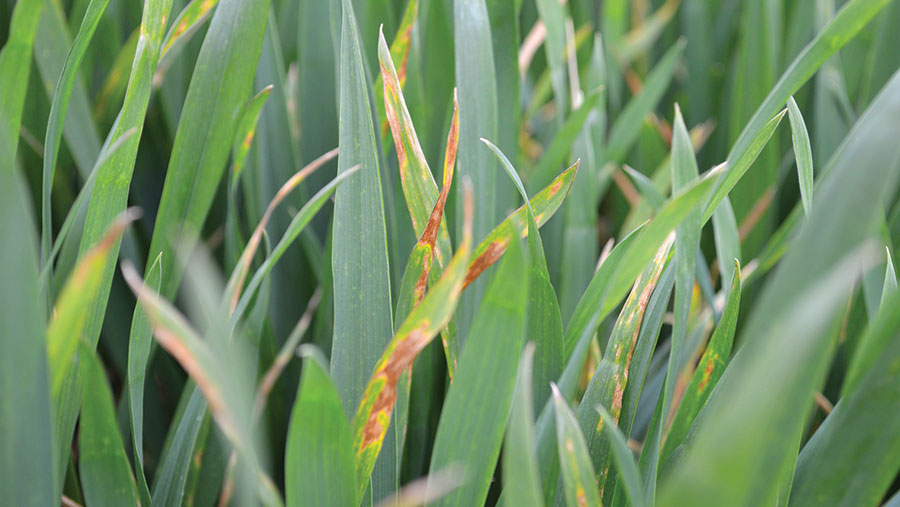 For T2, it will be an SDHI-azole-multisite approach, with chlorothalonil used before 20 May and folpet afterwards, says Mr Goodinson, who covers Herefordshire and the surrounding areas for agronomy group Hutchinsons.

“It’s all about managing the disease threat in often thin and open late-drilled wheat crops this season,” he says.

In  the wetter climes of south-western England, agronomist Russell Dean sees the use of SDHIs at T1 and T2 as commonplace to counter the threat of septoria.

He is surprised about the large amount of the disease he is seeing, as growers in his area have switched to more resistant wheat varieties such as Siskin, Costello and Graham in recent years.

Mr Dean, who covers Dorset and Somerset for agronomy group Frontier, is following an SDHI policy at T1, while making sure there is a good rust active included, as he has seen yellow rust as far west as Bridgwater, near the Somerset coast.

For T2, SDHI use will be commonplace across all his crops, and he will be looking to use the new chemistry such as Revystar at this fungicide timing, which traditionally gives the biggest yield boost.

“With high grain prices, growers will see a higher rate of return for only a modest few pounds more for the new chemistry,” he says.