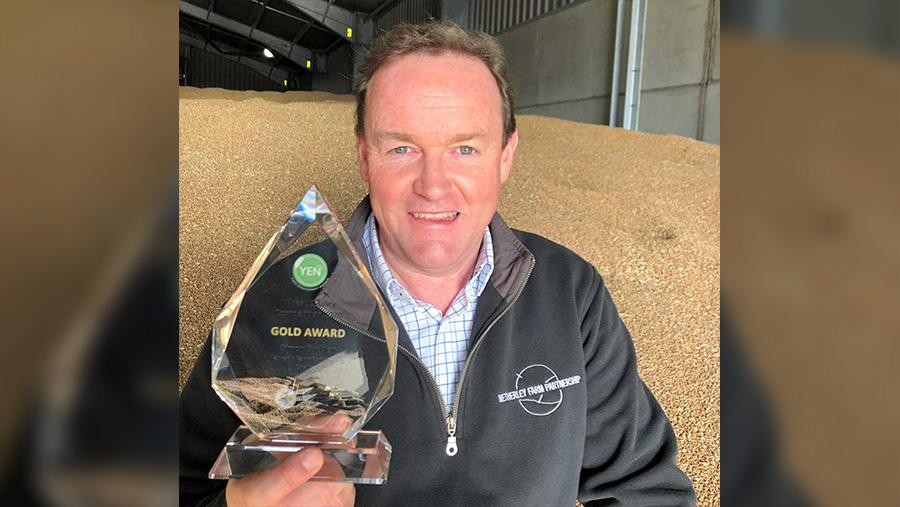 Mr Budden won gold with his crop of Crusoe winter wheat which yielded 11.98t/ha and a grain protein content of 13% in the Yield Enhancement Network (YEN) milling wheat quality challenge.

See also: Tips on how to keep wheat fungicide costs under control

The awards, sponsored by UK Flour were presented at the AHDB milling wheat conference on Thursday, with second prize going to Essex grower James Mayes of Bentfield Bury Farms, and third to James Loder-Symonds of Nonington Farms, Kent.

Mr Budden’s winning crop at Netherley Farm had a hagberg of 352, specific weight of 82.7kg/hl and moisture level of 12.5%, earning him the winning title in the competition run by crop consultant Adas.

The crop was drilled on 20 September at an average seed rate of 185kg/ha into good soil conditions where it received a total of 302kg/ha nitrogen fertiliser.

A Carrier cultivator was used to create a stale seed-bed before planting with a Horsch Sprinter direct drill, fitted with 5in Dutch openers.

“Come January, the crops were looking a bit thin given the wet winter conditions, so the first of five solid ammonium nitrate applications began early in the season,” he says.

This was followed by applications of triple superphosphate and muriate of potash, while the second nitrogen application at the end of February included some sulphur.

The use of a Yara N tester indicated a greater nitrogen requirement at the flag-leaf stage, so an additional liquid nitrogen spray was applied on 8 June, bringing the total nitrogen applied to 302kg/ha.

A four-spray fungicide regime with trace elements was deployed at the 460ha farm in south-east Hampshire, where fungicide costs were kept low –under £98/ha, with little threat from brown rust.

Mr Budden grows a range of crops for milling, oil and seed production across a diverse range of soil, the majority of which are loam soils with a clay cap.

Given the fact that fields can experience a range of different soil types, variable rate applications have been used on farm for several years to ensure even crop quality.

Nitrogen and plant growth regulators are applied at variable rates, with individual nozzle control for fungicides on his Amazone sprayer.

The final ear count was 540 ears/sq m, about 100 ears down on usual, and 80 less than his crop of Zyatt milling wheat last year. He notes that the crop received rain at crucial moments in order to keep it growing well.