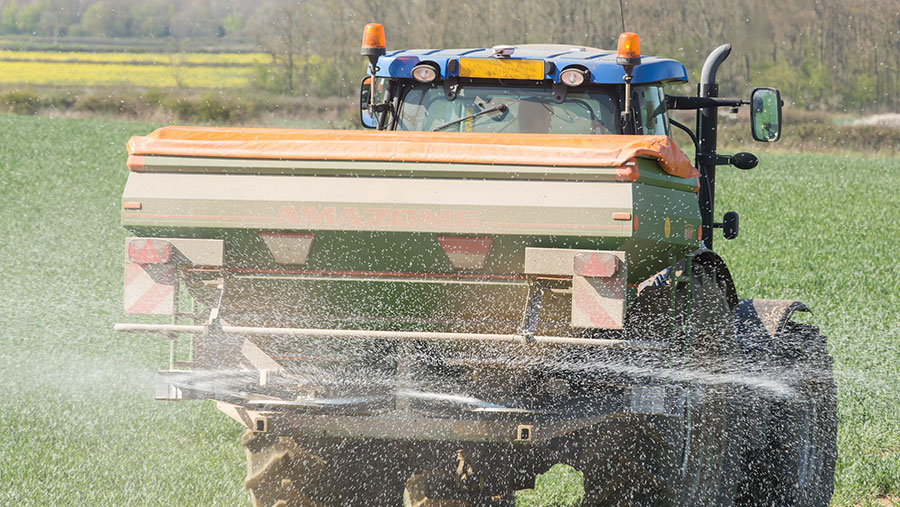 Growing milling wheat on marginal soils high up in the Cotswolds requires greater accuracy, as well as more fine-tuning, when it comes to nitrogen applications.

Last season proved to be no exception for grower Dan Powell, with cold temperatures in March making it necessary to use a generous hit of early nitrogen to get crops off to a good start and maintain tiller numbers.

Mr Powell, who has the added challenge of farming 900ft above sea level, points out crops usually start growing a bit later at Hartley Farms than in most other parts of the country, making nitrogen planning a key part of his fertiliser strategy.

“We often split the first dose into two,” he says. “The aim is to get across the whole farm quickly, so that tiller numbers don’t suffer and yield potential isn’t limited. A little and often approach works best in most years.”

Wherever possible, quality markets are targeted, so any yield limitations from the soil type can be offset by a higher grain price and premium-earning opportunities.

Mr Powell has a target wheat yield of 10t/ha, but has to be realistic about crop prospects in a dry year.

“Like everyone else, we may achieve more than that.

“But as the soils are drought-prone, we are reliant on the right weather and moisture availability to get those yield levels.”

Last year, three milling varieties, Crusoe, Edgar and Skyfall were grown for Warburtons, which stipulates a lower grain protein of 12.5%.

The different characteristics of the varieties mean that a blanket approach with nitrogen was not appropriate – with Skyfall receiving more nitrogen than the other two.

“It’s a higher-yielding variety which is not as good at using nitrogen as others, so we had to be a bit more generous,” says Mr Powell. “It did make the grade at harvest 2016.”

He works closely with Ross Leadbeater of CF Fertilisers, who starts the nitrogen planning process by taking N-min samples in late January or early February, to establish the amount of nitrogen available from the soil.

At the same time, he measures the green area index of the crops, to determine the amount of nitrogen already in the crop canopy.

“These measurements are then put through our nitrogen calculator,” explains Mr Leadbeater.

“I also input the intended end market, the variety and the yield target, so that we can get a total nitrogen input figure for the growing season and then match the fertiliser products accordingly.”

While Mr Powell has a preference for granular compound fertilisers, there is also some use of urea on cereals and oilseed rape, to keep costs down.

This year, he is using KayNitro Sulphur (25-0-13-7 NPKS), which will save on the number of passes he has to make and should hopefully bring a grain specific weight benefit from spring-applied potash.

Variable rate applications are used for base P and K fertilisers, as the farm has been mapped, but a trial with variable rate nitrogen failed to show him any significant benefits.

Soil organic matter levels have been boosted over the years, with the use of sewage sludge and composts.

Mr Leadbeater explains nitrogen rates tend to be fine-tuned towards the end of season, with the help of a hand held sensor to do sap testing.

“Overall, we will apply anything from 225-300kg of N to the milling wheats, depending on the season,” he reveals. “It’s usually the last of the four applications that is altered, depending on yield expectation and rainfall.

“Just 50kg of nitrogen can make a big difference on these thin soils.”

He adds that high pH soils do not have the same efficiency of nitrogen use, so using the industry standard figure of 60% is wrong.

“It’s a bit lower, at around 55%, so that has to be taken into account.” Doing sap tests at the flag-leaf stage has proved to be important.

“It tells us whether there’s enough nitrogen in the plant and whether we are likely to get the required grain protein. If not, there’s still time to put it right.”

However, in a poor growing season, the last 40-50kg of nitrogen may not be required, he notes. “If the yield expectation isn’t there, we’ll drop the total back accordingly.”

His final point is that for the Warburtons contract, all of grain protein content has to be achieved with nitrogen applied to the soil, not with a late foliar application to the ear.

“That’s why the last application is so important,” he says.