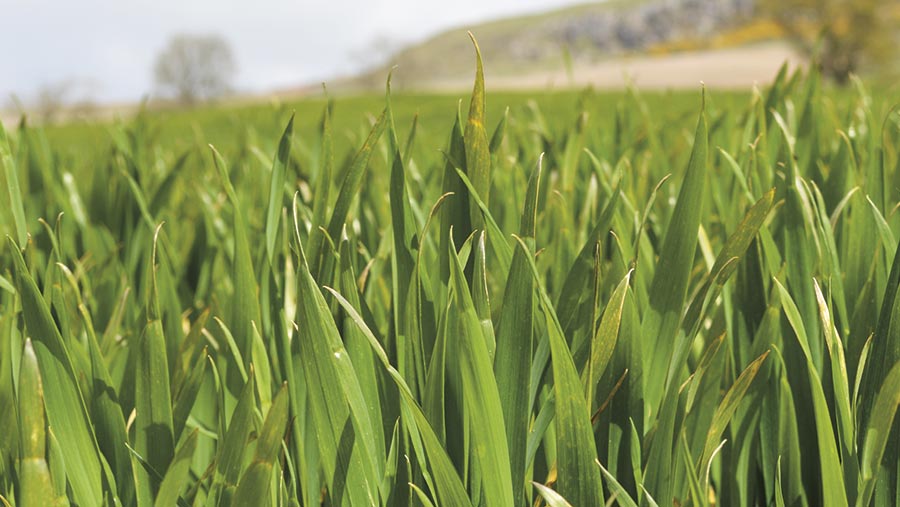 Monitoring these growing needs allows David Fuller-Shapcott to add key micronutrients to his fungicide sprays and so push his wheat yields up above 14t/ha.

It has helped him to win consecutive bronze and silver awards in a yield competition run by crop consultants Adas, and this year he hopes to go one better.

Following a green cover crop, one winter wheat field at an altitude of nearly 200m on his farm just north of Kelso was looking good in early May and all set-up for a high yield.

“If we keep it growing into September then we have high hopes for this wheat crop,” Mr Fuller-Shapcott tells Farmers Weekly.

Tissue tests are conducted about a week before each of his first three fungicide sprays, costing just over £20 each, and then micronutrients can be added at his T0, T1 and T2 fungicide treatments as needed.

He started the procedure in the early spring of 2015 and this threw up deficiencies of manganese, zinc and copper, which he looked to correct with his early T0 fungicide spray.

Correcting these three micronutrients helped balance up others, such a boron, but amounts applied were not high enough so a further top-up treatment was needed at T1.

That season highlighted to him that zinc was critical in spikelet, or grain site, formation, and the following season in 2016 when more early zinc was added the number of spikelets per ear was boosted to 19 from only 15 in 2015.

This resulted in 55 grains per ear last year compared with 43 in 2015, and gave him a very good yield of 11.8t/ha in a generally poor yielding season hit by lower sunshine levels in June.

Catch up on our report of top yielding growers in 2016 in the YEN competition, which saw northern growers scoop up most of the awards, while we talked to the overall winner Northumberland grower Shaun Watson.

This was enough to win him the second highest potential yield prize in Adas’s Yield Enhancement Network (YEN) competition, achieving over 60% of the crop’s calculated potential yield.

This was a step up from 2015 when a yield of 14.2t/ha gave him the bronze potential yield award in a bumper harvest year when just across the border Northumberland grower Rod Smith broke the world record with a yield of 16.52t/ha.

Rather than throwing money at his chosen YEN plots in the quest for top yields, Mr Fuller-Shapcott says the higher YEN yields meant that production costs were lower than on the rest of the farm.

In 2016, his total production costs – including all variable and fixed costs – were £109/t for his YEN plots as against £118/t across the rest of this wheat.

“Yield is very important but not at any cost. We are diluting the cost of growing by growing more,” he says.

Now the aim is to bring the standard cost of production down to YEN levels across his 120ha of winter wheat he grows on his 400ha predominantly arable farm at Sweethope, some three miles north of Kelso.

Biscuit-making varieties of wheat are grown on the farm to earn a premium over feed wheat, currently at about £6/t, as the protein and hagberg demands of the breadmakers are difficult to hit in this northern Scottish climate.

“It’s a low-risk premium product and if we fail to hit the quality then the wheat will go for distilling,” he says.

His main variety is Zulu, but he is also growing Barrel, Bassett, Tuxedo and Invicta, and all these find ready biscuit markets in Carlisle, Edinburgh and Fife.

Growing quality wheats in the Scottish Borders can be tricky, with August often being the wettest month of the year and crops can be in the ground for 365 days, while late harvests and early winters can mean a narrow drilling window.

Hence autumn drilling is focused on the first two weeks of October, and seed treatments are very important to control pests and diseases as well as using micronutrients, such as phosphite and manganese, to encourage early growth.

Seed dressings such as Redigo Deter and Kick-off are used to give control of slugs, aphid-spread Barley Yellow Dwarf Virus (BYDV) and seed-borne diseases, and give a boost to early growth.

“On our heavy strong soils it is crucial to give our crops the best possible start and drive roots down to allow nutrient recapture in the spring,” he says.

The farm has moved from ploughing to minimal tillage to establish all crops, with the eventual aim to move towards direct drilling to give good establishment at lower costs.

Spring nitrogen is only a two-way split due to the short spring season with 50kg/ha applied along with phosphate, potash and sulphur in early April, followed by a big dose of 180kg/ha of inhibited urea nitrogen in early May.

Mr Fuller-Shapcott is not overly concerned about his crops slow start in the spring, as he is not looking for a lot of early growth but to keep the wheat on a slow growth trajectory to give high yields and biscuit-making wheat protein content of 10.5%.

“The plants are on a journey from A to B so we want to make this is as straight and as unchecked as possible through to harvest,” he says.

His plant growth regulatory regime is focused on encouraging rooting and improving straw strength, using mepiquat chloride at the T0 stage to drive rooting, and then using it again with chlormequat at T1 to even up tillering and strengthen the straw.

Fungicide spend is a relatively high £140/ha to keep septoria out of his crop with a relatively small number of good spray days in the Borders.

His early T0 spray includes an azole to give yellow rust activity, a morpholine for mildew and the multisite chlorothalonil to protect against septoria.

At T1, Mr Fuller-Shapcott looks for a big hit of SDHI using two half rates of boscalid, aimed at eyespot, and fluxaproxad for septoria, in addition to an azole and strobilurin for rust protection and again adding chlorothalonil.

His main wheat variety, Zulu, is susceptible to eyespot, only scoring a 3, while yellow rust is a modest 6, so attention needs to be taken over these two disease threats.

He looks for a broad mix of an SDHI, azole, strobilurin, morpholine and multisite at the flag leaf T2 spray timing, while an ear spray of azole tebuconazole is used at T3.

At harvest 2016, his wheat experienced a lot of seed shed due to wind and he believes that his yield would have been higher if he had been able to harvest a few days earlier.

For this season, the crop promises well and he is not too concerned about the dry spring on his heavy land farm, but with harvest usually in late September the weather over the next four months will be a big factor in his final yield.

Winning formula in 2016 for the YEN competition