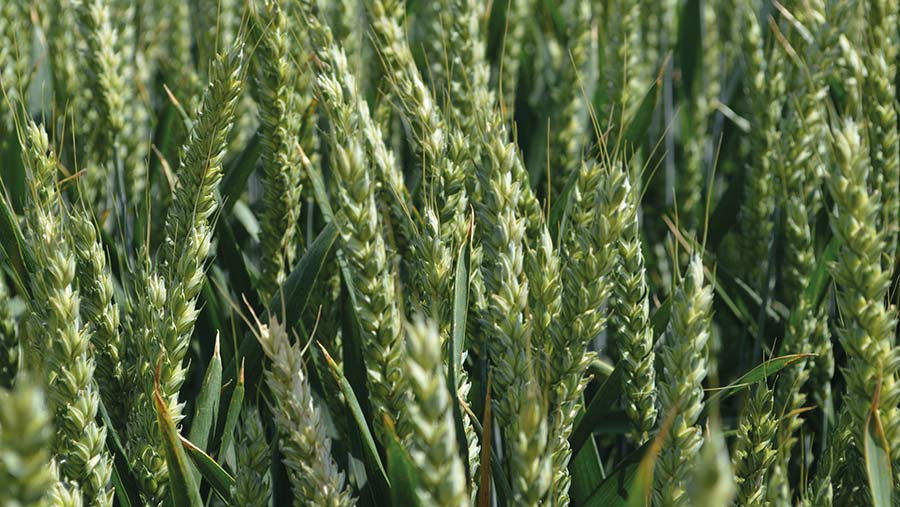 Andrew Robinson is set to sharply increase his area of Extase winter wheat next year as this season’s crop looks “phenomenal” and is very clear of disease.

The variety has risen in popularly due to its good disease resistance, and Mr Robinson say this helps him manage disease risk rather than cut back heavily on fungicide use.

The Bedfordshire heavy land farm he manages grows thick, high-yielding crops of milling wheat, which can tend to encourage disease, but the Extase looks very impressive this season.

“We have a phenomenal crop on the farm. It is a really good variety, but we are using it to manage risk, rather than cut back dramatically on fungicides,” he says. 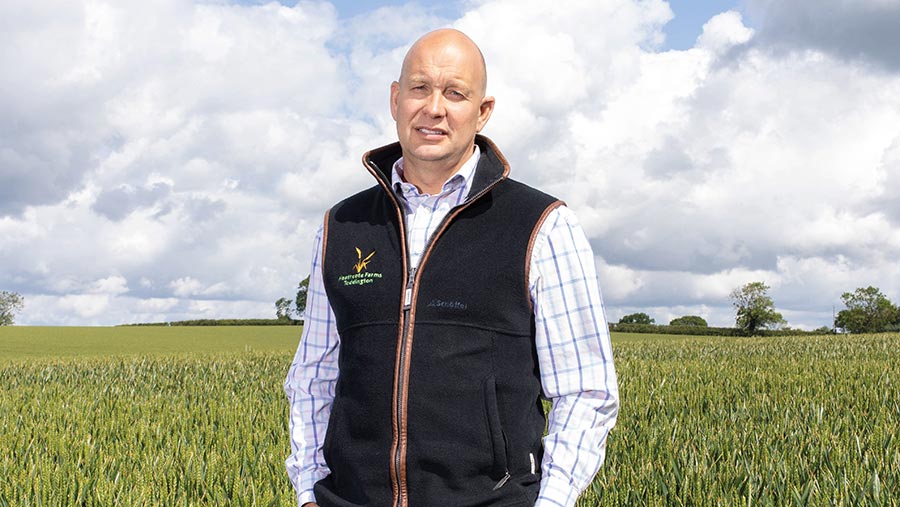 Next season, Mr Robinson is looking to drill 180-200ha of Extase on an expanded wheat area to make up one-third of his winter wheat, after growing just 40ha this season.

He focuses on quality wheats at the 1,200ha Heathcote Farms, with Crusoe and Siskin grown alongside Extase, and a small area of the soft feed wheat variety Spotlight.

For the Extase, he trimmed back his T1 fungicide spray compared with other varieties, saving him a few pounds a hectare for an overall fungicide spend of £110/ha. However, the big advantage is the flexibility it gives him to manage disease risk.

“The Extase is looking spotless – it is really clean compared with the Siskin, where we are seeing septoria on leaf two,” he says.

The farm, near Toddington, just north of Luton, has several good milling outlets within a 40-miles radius, and Group 2 Extase has sold at a small £5-£7/t discount to a top Group 1 milling wheat such as Crusoe.

Mr Robinson was attracted to Extase by its very clean appearance in trials, especially after the banning last year of a key multisite fungicide chlorothalonil, which helped protect against septoria.

For harvest 2019, he grew the first commercial crop of the variety, which yielded 11.9-12.6t/ha – compared with a five-year yield average of 12.31t/ha. It gave a good sample and was sold to milling group Heygates.

The wet autumn of 2019 precluded any winter wheat drilling and then, in autumn 2020, only 40ha of a planned 120ha was drilled as wet weather in late September curtailed drilling.

The 40ha was drilling during the third week of September at 350 seeds/sq m, and Mr Robinson says the variety was the most vigorous he has seen, especially in the spring, which helped to suppress weeds.

Miller has a liking for Extase

Leading independent flour miller Heygates says it wants to buy Extase wheat, but cautions against flooding the market with the variety as a a big harvest is expected this summer.

George Mason, senior executive at the company, says the variety produces good flour for a Group 2 wheat, but it is a bit inconsistent, which is why it is not a Group 1 wheat.

“Yes, it’s a good variety and farmers should grow it, but we need a spread of varieties and a spread of quality,” he says.

It is also relatively early to mature, which is good for the grower and the miller to spread workloads at harvest and deliveries to mills.

The group has bought the variety at full milling specification of 13% protein and also down to 11.5% protein, but price premiums could fall if there is plenty of wheat around after harvest. Full industry spec for milling wheat is 13% protein, 250 Hagberg and 76kg/hl specific weight.

This summer’s UK wheat harvest could top 15m tonnes, with the area and yield set to be higher after the 2020 wheat crop fell sharply by 40% to 9.7m tonnes due to a drop in yields and area.

Heygates is a major quality wheat user, buying more than 520,000t of wheat annually, with the vast majority from UK farms.

All four varieties grown had a T0 spray of the azole tebuconazole to control any yellow rust, and then, after a very dry April reduced the disease risk, a T1 of the SDHI bixafen + azole prothioconazole (Aviator) was applied.

The Extase received 0.8 litre/ha of just the Aviator, while the other wheat varieties had a 1 litre/ha dose of Aviator, plus multisite folpet.

The T2 fungicide across all varieties was SHDI fluxapyroxad + azole mefentrifluconazole (Revystar-type product) plus folpet, while the T3 ear spray was prothioconazole plus strobilurin fluoxastrobin (Firefly). Mr Robinson says the strategy is to frontload fungicides, and so give the option to rein in later.

“This is the most significant wheat variety in my career for some time, but it still needs managing,” says Mr Robinson, who was 2019 Farmers Weekly Farmer of the Year.

Extase is the highest-yielding variety in untreated fungicide trials on the AHDB Recommended List, with a yield of 93% – 5% ahead of feed wheat Theodore in second place.

This reflects its good resistance to septoria, with a score of 8 – the second highest on the list after Theodore’s 8.3. Extase also scores 8 for yellow rust and 7 for brown rust, on a 1-9 scale where 1 is very susceptible and 9 shows good resistance

Together with Siskin, it has the joint highest-fungicide-treated yield of any Group 1 or 2 wheat at 100%, and is only 5% behind the highest overall wheat, feed variety Skyscraper at 105%.

It is also early to mature, being one day earlier than milling varieties Skyfall, Crusoe and Zyatt. Extase has a high Hagberg number at 299 and a good specific weight of 78.4 kg/hl on the AHDB list.

Robin Aird is another farm manager pleased with Extase this season. He has managed to cut back on fungicide spend and is hoping for an above-average yield.

“The variety fits in nicely for us as it has good septoria resistance, and we are growing it as a feed wheat with potential for a premium,” says the FW Farmer Focus contributor. 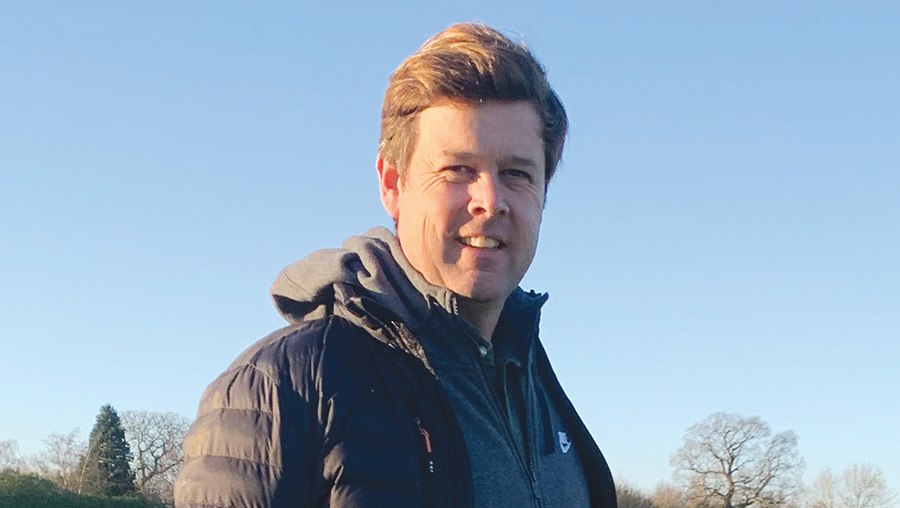 He is growing nearly 160ha of the variety for the first time, alongside Siskin, at the 1,500ha Charlton Park Estate on the north Wiltshire/Gloucestershire border.

This season he has cut back fungicide spend on both the Extase and Siskin to just over £50/ha, as both have good septoria resistance. He would expect to spend nearly £100/ha on “dirtier” feed wheats.

The Extase has looked healthy and strong, with little septoria in the crop, and he is hoping it will yield above the farm’s average for wheat at 8.5t/ha.

Seed company KWS, which bred Extase, says there should be enough seed to supply the market this autumn. It is expecting high demand after Extase took over from Skyfall in autumn 2020 as the most popular variety from certified seed sales, and is set to maintain that position this autumn.

Kirsty Richards, the group’s cereals product manager, says the variety can be drilled from the end of September, shows vigorous early growth and keeps ahead of other varieties through to an early harvest.

“Compared with many other varieties, Extase is less dependent on chemistry to deliver its yield, more resilient in the face of increasingly variable growing conditions and more flexible in its management,” she says.

Will Compson, the group’s UK country manager, believes worries over the availability of Group 1 wheats in 2021 and beyond is fuelling Extase’s popularity.

He says there is a lack of new Group 1 milling varieties coming to the market, while older milling wheats are suffering from disease. Many Extase growers have seen good protein contents, and some millers have shown an interest in offering Group 1 premiums for crops at 13% protein.

“We want to focus on the performance of Extase as a full-specification Group 1 milling wheat in more detail at harvest 2021 to see whether it has comparable quality to other Group 1 varieties,” he says.