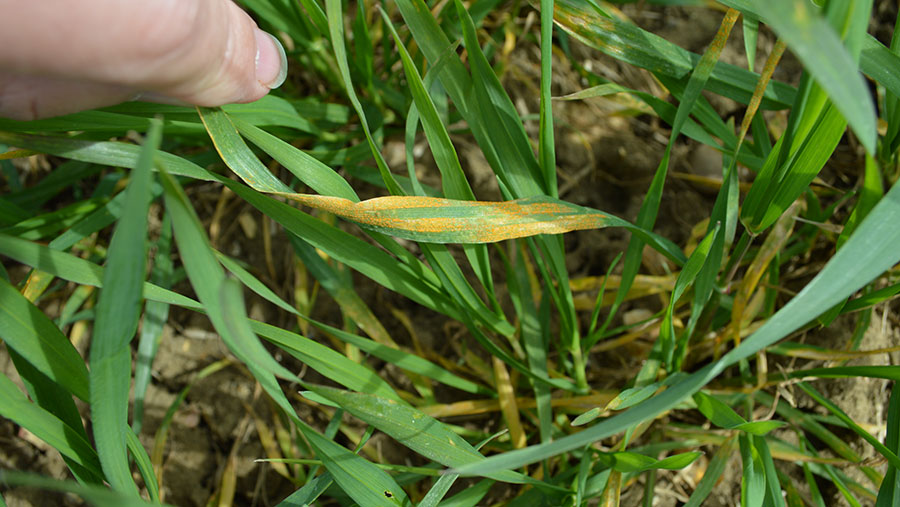 Yellow rust disease is suddenly appearing more widespread in winter wheat crops, and growers are being urged to make sure they have a rust-active fungicide in their upcoming sprays.

The current weather of warm days and cool evenings is ideal for the foliar disease’s spread, and it is now being seen in even the most resistant wheat varieties, especially over the past two weeks.

Bill Clark, technical director at crop consultants Niab, says the disease is being reported up the east side of England from Kent to North Yorkshire and across to Staffordshire in the west.

“The more you look, the more you will find it, both in early and late sown crops,” he tells Farmers Weekly.

In a January-sown winter wheat trial at Niab’s Cambridge headquarters, yellow rust is easy to find, and although many growers have put on T0 fungicide sprays with a rust-active element, it is clear that the incidence of yellow rust is picking up, says Mr Clark.

Wheat varieties are assessed on a 1-to-9 scale for disease resistance in the AHDB Recommended List where 1 is very susceptible and 9 shows good resistance, and biscuit wheat variety Firefly is a top-rated 9 variety.

Attention should be given to varieties with the lowest rating – 5 – on the present list, such as Skyfall, Zulu and Bennington, but the disease can be found on other varieties such as Zyatt (7), Gleam (7) and Graham (8).

Mr Clark recommends using a rust-active azole fungicide, such as tebuconazole or epoxiconazole,  as soon as yellow rust is spotted, with a half dose of these fungicides likely to give 90-95% control.

With T1 spray timinigs coming up, most popular SDHI-azole mixes such as Adexar, Aviator, Elatus Era, as well as the new Revystar, should have enough rust-active elements to give good control.

Growers can see the Rustwatch website for more information, and record their findings on this survey.