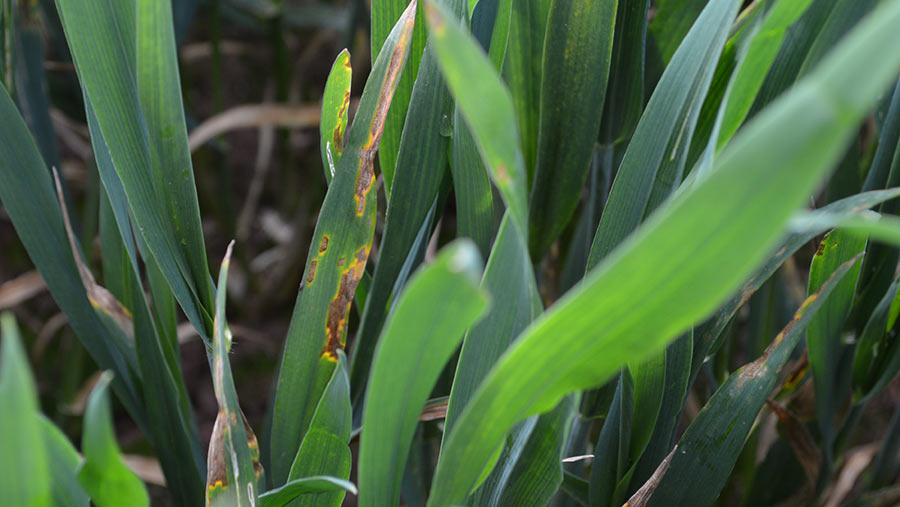 Septoria could be ready to spread rapidly in northern winter wheat crops and growers need to be prepared to use an SDHI-azole fungicide to stay on top of wheat’s most yield-sapping disease.

Crucial T2 flag leaf sprays are two to three weeks away in the Scottish Borders and warm weather now could allow the disease to spread like wildfire, says Andrew Wallace, agronomist at advisory group Agrii.

“The disease is there on the lower leaves and could be about to explode give the right weather conditions,” he tell Farmers Weekly.

Mr Wallace advises on crops from East Lothian to Northumberland and says he is seeing a lot of septoria, especially in susceptible wheat varieties such as Horatio and Viscount.

High levels of rhynchosporium are been seen on winter barley, and as this is a wet-loving disease like septoria, Mr Wallace expects septoria inoculum to be already in wheat crops.

The rhynchosporium disease cycle of infection tends to be faster than septoria, so he sees signs of the barley disease as an early warning of septoria problems ahead in wheat. 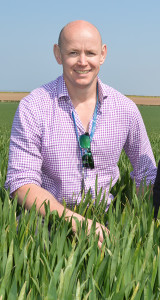 Looking at wheat crops on Rod Smith’s 400ha Beal Farm, some 10 miles south of Berwick-upon-Tweed, septoria is occasionally present on lower leaves, but not on the top three key yield-producing ones.

Mr Wallace says varieties with better septoria resistance are likely to cope better, such as Dickens, which is grown widely on Mr Smith’s farm, and also biscuit-making wheat variety Zulu.

“Wet weather is likely to have splashed the disease up the wheat plants, but it has not really taken off yet because of the low temperatures,” he says.

He recommends an SDHI-azole mix with the addition of a multi-site fungicide such as chlorothalonil for T2 flag leaf sprays to protect crops from septoria, which is the number one yield-killing disease in his area.

If the weather turns warm then it is even more important to apply a comprehensive fungicide mix at T2, and these sprays are likely to start being applied on some of his earliest crops, such as on Mr Smith’s coastal farm, in the last week of May.