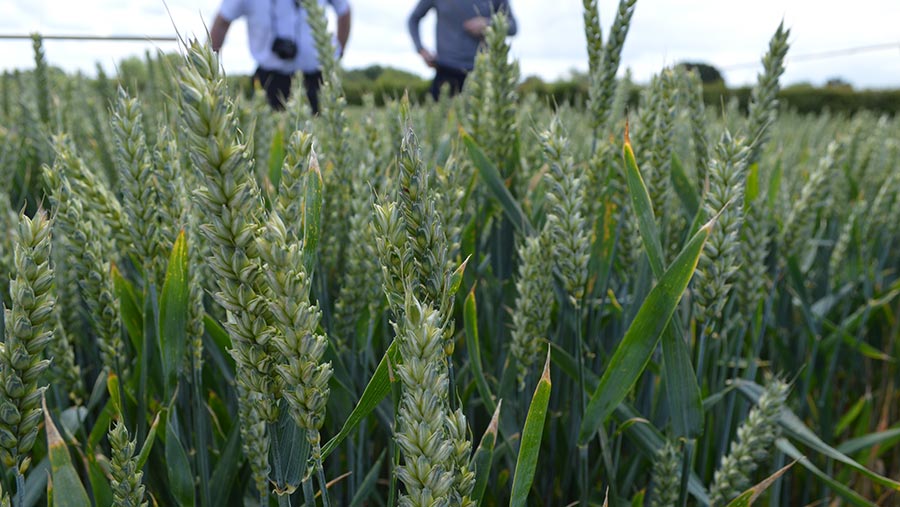 Agrochemical giant Corteva says its new cereal fungicide, Inatreq, which is set to be launched next spring, gives 10% better septoria control in wheat than its rivals, with a yield benefit of more than 0.5t/ha.

The active, with a new site of action, will be co-formulated with top-selling azole prothioconazole, and is set to be a step forward in guarding against fungicide resistance developing. This will help soften the blow from the loss of key products.

Stuart Jackson, the group’s field technical manager, says there is no cross-resistance from Inatreq to other groups of fungicides currently used in cereals, while it keeps disease off the flag leaf in wheat for longer than the competing products.

“Six weeks after a T2 flag leaf spray, we are seeing 10% better control of septoria than the competition,” he told a briefing on the new fungicide.

See also: Pick from six wheat varieties for the future

When taken through to harvest, the group’s wheat trials showed the new formulation gave a yield benefit of more than 0.5t/ha – or 10.20t/ha – compared with a competing SDHI/azole mix of 9.61t/ha.

This comes at a time when the popular multisite fungicide chlorothalonil is set to be banned for use after the early spring of 2020, and the widely used azole epoxiconazole is under threat.

The new product is expected to be approved in the fourth quarter of this year for use next spring, and will be targeted at the lucrative T2 flag leaf fungicide timing in wheat. A full name and pricing is yet to be released.

Mr Jackson explains the fungicide has the same mode of action as SDHIs and strobilurins, but, significantly, a different site of action, so it has shown no sign of cross-resistance. It acts by restricting cell respiration in the attacking fungus.

When the Inatreq-prothioconazole product was compared with popular SDHI-azole mixes, there was little difference in septoria control some four week after a T2 spray. But after six weeks, there was clearly better disease control.

“The Inatreq product is more persistent and more consistent at keeping septoria off the flag leaf for longer,” Mr Jackson says. 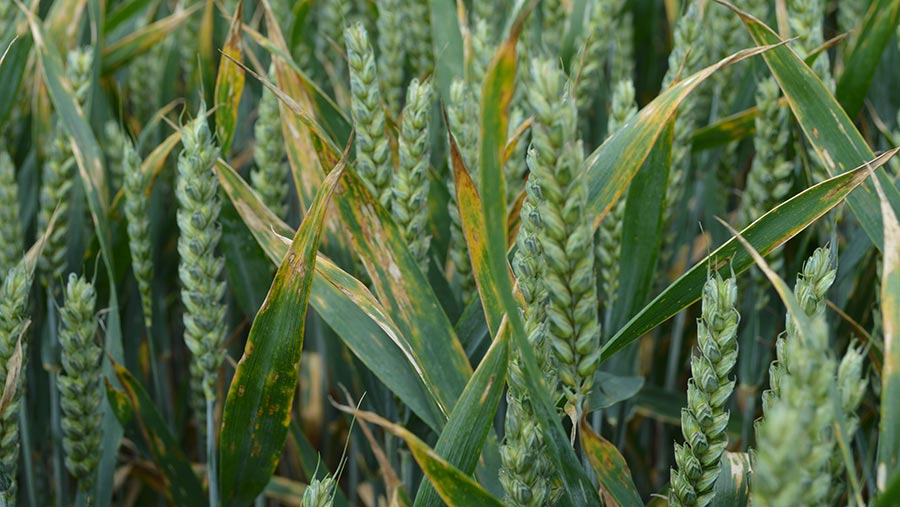 While the new product is more effective than SDHI-azole combinations against septoria, he says it is broadly similar to most SDHI-azole mixes, although the SDHI solatenol – as in Elatus Era – is slightly better against rust diseases.

Inatreq’s use could take some of the pressure off SDHIs, which are often used twice in a season, and because of its longer persistence it could, in some circumstances, make a T3 head spray less likely.

The group is looking to get approval for two applications a season to give good flexibility in timing, but only one application is likely to be recommended.

Since it acts on a single site within the fungus, like SDHIs, it is consider to have a medium to high risk of developing resistance, so mixing with fungicides with a different site of activity will be essential.

It can be applied in wheat from the end of tillering to mid-flowering and is likely to be recommended at 1.25 litre/ha at T1 and 1.5 litre/ha at T2. One litre of the product contains 50g of Inatreq and 100g of prothioconazole.

The product will encompass a new formulation technology, called i-Q4, developed by Corteva, which gives better coverage of and penetration into the leaf than competitor products and also allows for lower water volumes.

Most fungicide product labels suggest spraying at 200 litres/ha, with many growers going as low as 130-150 litres/ha, but the new product can be sprayed down to 100 litres/ha, meaning improvements in efficiency without a reduction in efficacy.

It is looking for recommendation for spring and winter wheat, rye, triticale, durum wheat and spelt wheat in 2020, and for barley some two years later.

How the fungicide works

Inatreq’s chemical name is fenpicoxamid and it is from the picolinamide chemical group, which has not been used before as fungicides in cereals

Fenpicoxamide is derived from the natural anti-fungal compound UK-2A, which is secreted from streptomyces bacteria found in soils, and is produced by fermentation rather than a chemical process.

It could be regarded as “natural”, but the chemical is not photo-stable and need a semi-synthetic modification to make it stable and stop it from breaking down rapidly.

It works by inhibiting fungal respiration of the mitochondria, or the power generations of a fungal cell, at a target site known as the quinone inside site. So fenpicoxamid is known as a quinone inside inhibitor (QiI)

This sound similar to quinone outside inhibitor (QoI) fungicides, also known as strobilurins, but there appears to be no cross-resistance between the two.

This is important, as the strobilurins rapidly lost their efficacy against septoria some 15 years ago and are now largely ineffective against this disease.

Corteva has other picolinamide products in development as fungicides, which may be some five years from the market.