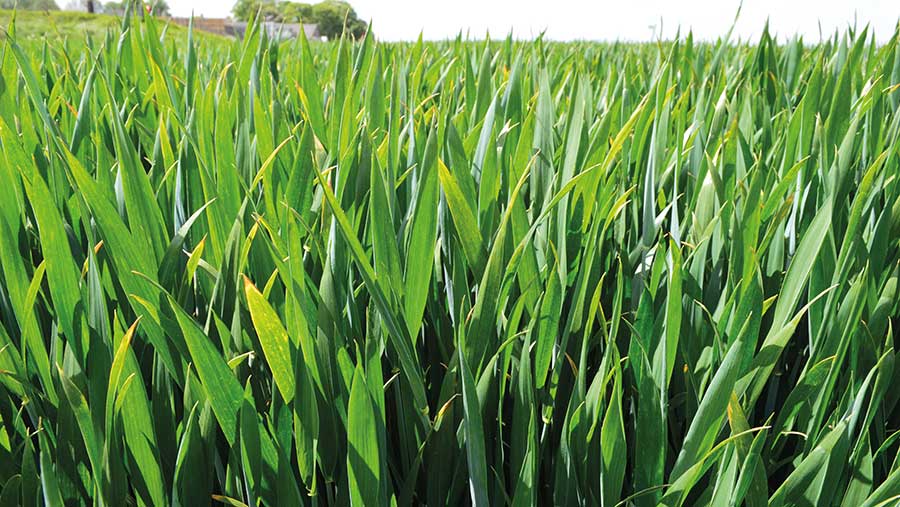 David Hoyles is impressed with the new winter wheat feed variety Dawsum and has increased his area by 50% this season.

That’s because it produced a good specific weight on his Lincolnshire farm, despite last summer’s poor sunlight levels.

Even though the variety was drilled at the end of November after wet-lifted sugar beet, it tillered well in the spring, was his second highest-yielding variety and produced a specific weight of 78kg/hl in the summer of 2021, when the farm’s average was just 72-74kg/ha.

He says the variety’s ability to hang on to a high specific weight is important financially as there is nothing a grower can do if conditions turn unfavourable, such as low sunlight levels in June and July, at the grain-filling stage.

“The variety was helpful in a poor sunlight year when other varieties struggled with specific weight,” he tells Farmers Weekly.

Mr Hoyles farms 700ha at Monmouth House, Litton, in the south-east corner of Lincolnshire close to the Wash. This area which can suffer from low sunlight in the summer being so close to the sea.

The variety shows the second-highest specific weight on the AHDB Recommended list, after Costello, at 79.4kg/hl; has the second highest yield at 104% after Champion; and shows good yellow rust and septoria resistance.

The 20ha of Dawsum grown as a seed crop was harvested in 2021 and yielded 11t/ha, below the farm’s five-year average of 11.5t/ha, but above the 2021 average of 10.6t/ha, and was his second-highest yielding variety after Graham, which went into the ground in more favourable conditions after potatoes.

The variety’s stiff straw is an advantage on his fertile silt soils, which grow a lot of vegetables, and he was able to cut back on his rates of plant growth regulators, such as chlormequat and Moddus (trinexapac-ethyl), compared with his main commercial wheat variety Skycraper.

The farm only grows first wheats, largely once every four years, with potatoes, sugar beet, mustard and vegetables in the rotation.

This means that with a lot of residual nitrogen and fertile soil, bagged nitrogen use is only 160-200kg/ha in a three-way split for the wheat. Seed crops of Cranium, Graham, Astronomer and Dawsum are grown, along with commercial crops of Skyscraper. 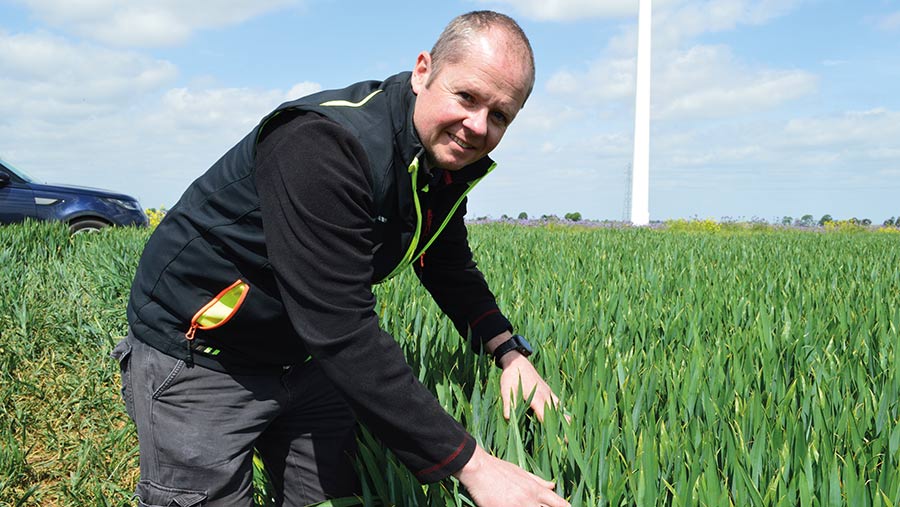 The variety’s good disease resistance showed through and Dawsum was clear of yellow rust early in the season, so missed out on a T0 fungicide while most other varieties had a tebuconazole spray.

Most varieties had Ascra at T1, but Dawsum had the less-expensive Firefly azole-strobilurin mix, as the variety was more backward and cleaner than other varieties helped by its later drilling.

The T2 flag-leaf spray was Revystar, but the fungicide rate for Dawsum and Astronomer was cut back compared with Skyscraper, and Firefly was generally used as the T3 ear spray.

This gave a budget saving of £20-30/ha for Dawsum, at a total annual fungicide cost of £80-100/ha, compared with Skyscraper.

This season Mr Hoyles has increased his area of Dawsum to 30ha, with the variety drilled in the second week of October after vining peas and early-lifted potatoes.

Again the variety had no T0 and a low rate of Ascra at T1, whereas many other varieties had Revystar, and T2s across the farm were Revystar or Univoq depending on the septoria and rust pressures.

“We are in year two with Dawsum, it has good disease resistance and a good specific weight, so we will see how it yields and if it is above the average this year we will put it in again next season,” he says.

He grew 20ha last year as a seed crop, which gave an average yield of 11t/ha despite a cold July on his 100ha Ashfield Farm, East Cowick, just west of Goole, and he is growing 17ha of the variety as a commercial crop this season.

“The variety stands well and provides a relatively reliable yield, and the crop in the ground this season looks very good,” he says.

The variety was drilled in mid-October 2020, laid low over the winter and then really started growing in the spring, and he was surprised how well it did on one of his fields of light sandy soil.

The crop was grown across four fields, with yields ranging from 11.1t/ha down to 9.23t/ha on the lighter field. This compares with medium-term farm wheat yields of about 9.5t/ha, and on the better land 10-11t/ha.

“Specific weight also held up very well too, averaging 80kg/hl, which would have been very valuable had we been growing it commercially as a feed crop,” he says.

What the seed trade thinks

Dawsum is forecast to become the UK’s most popular feed winter wheat variety this autumn, and second in the overall market behind Extase, helped by its high yield, good disease resistance, stiff straw and impressive specific weight.

Chris Piggott, seed manager at agronomy and supply group Frontier, says the variety has good attributes and is one that will appeal to growers and the seed trade, with no obvious weaknesses.

“It’s got incredibly high yield – both treated and untreated. It’s very strong across all the main foliar diseases and it has strong straw.

“It’s got a great specific weight and all that you would want in terms of grain quality, so it’s unusual to see all this in one variety,” he says.

The variety has good flexibility as it can be drilled early or late, without too much of a yield penalty, and will appeal to regenerative growers with its strong genetics, he adds.

Stuart Rowley, director of Driffield, Yorkshire-based grain and seed merchants Mortimers, says the variety’s high specific weight will be very useful when weather conditions are adverse, as they were in last year’s dull and cool summer.

“You can’t change the weather, but you can mitigate against it to a certain degree by choosing a high specific weight variety.

“So the higher the genetic potential for specific weight, the more likely you are to end up with something that is marketable, even in a bad year,” he says.

Animal feed compounders look for a minimum of 72kg/hl for feed wheats, so anything below that and growers can start to lose a lot of money on poor specific weights, he adds.