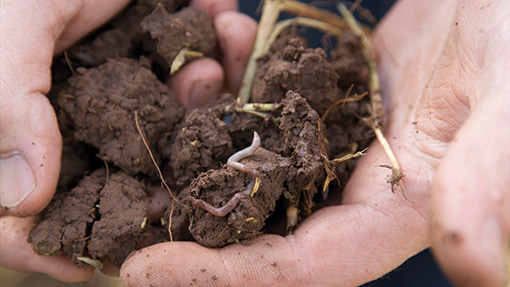 Worms have never been as interesting to soil biologists as they are now. Their behaviour could explain why applications of farmyard manure (FYM) are so valuable to crop yield.

Previous trials at Rothamsted Research have shown the addition of FYM can improve yields of barley grain and straw by more than 1t/ha each. And contrary to popular belief, these striking benefits can be achieved relatively rapidly, says Andy Whitmore of Rothamsted Research.

“We were shocked to learn a few years ago that what we thought would take decades could be achieved in two seasons using good-quality manure to improve yields from organic matter content of soil. We are now asking what organic matter is doing to soil beyond boosting its nutrients.

We think it acts as an energy source for soil organisms whose activities deliver benefits in terms of soil aeration and water and nutrient uptake,” he says.

Deep-burrowing – anecic – earthworms have permanent burrows, and reduce root resistance while increasing water availability at depth. The common lobworm is anecic. Shallow burrowers – endogeic types – don’t have permanent burrows and they ingest the soil as they move through the surface layer, creating smaller pores.

“But soil organisms such as earthworms need a good supply of organic matter in order to thrive.

“Our research is looking at the best way to ‘feed’ the soil by testing a range of organic materials applied at different rates, times and frequencies, to improve soil health and crop yields in a relatively short period of time.”

During this four-year project, the team is growing various crops on 220 9x6m silty clay loam plots at Rothamsted, comparing a range of organic matter qualities, amounts and timings of delivery to soil. The growth and activity of earthworms will also be scrutinised in simpler pot experiments in different soils.

Prof Whitmore expects results to vary significantly. “The quality of the organic matter seems important because other long-term experiments on straw incorporation show little benefit following the addition of far more organic carbon. About 50% more earthworms were active in the FYM-enriched plots.

As well as earthworms, the team will measure the levels of beetles and spiders in pitfall traps, and the presence of soil microbes and fungi. Their influence on soil structure and other factors must be evaluated.

“We will survey earthworm populations in spring and continue to determine microbial biomass and community composition. Water infiltration and penetrometer resistance measurements will be linked, if possible, to yields.”

By 2016, Prof Whitmore hopes to produce guidelines for using organic matter, including the economics of doing so, since transport costs differ from farm to farm. He will also assess both the environmental benefits and pollution such as nitrate leaching that derive from such applications.

“It will be useful to know the minimum cost at which we can transport and spread the type of organic matter that has the maximum value to yield with minimum effect on the environment.”