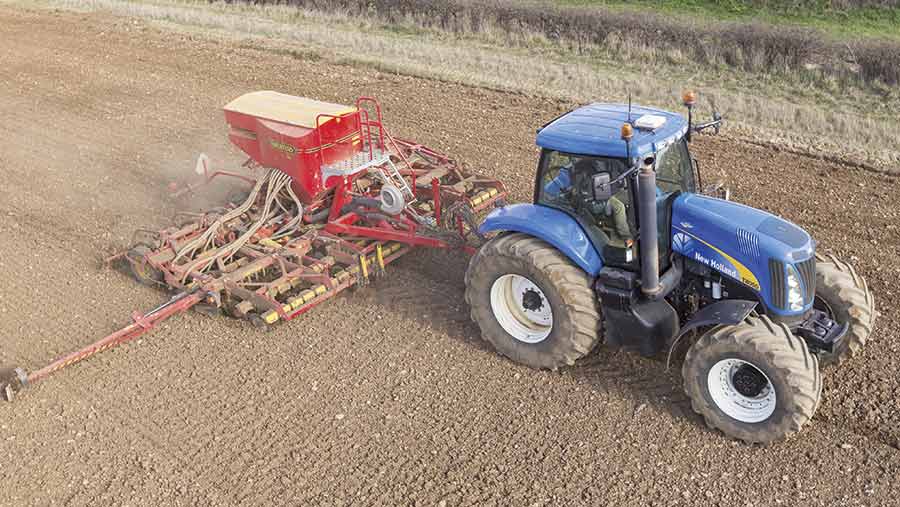 Spring wheat can earn growers more money than spring barley with a potential gross margin of over £800/ha and offer them a competitive crop to counter troublesome grassweeds.

According to agronomy group Procam spring wheat was the third most profitable crop for the top 25% of its growers in harvest 2016, behind only winter wheat and oilseed rape.

Taking up just 60,000ha of the UK cereal area, compared with 725,000ha for spring barley, the modest spring wheat market has been dominated for more than 10 years by group 1 breadmaking variety Mulika, which commands a milling premium but is falling behind on yield.

New kids on the block

However, group 2 spring wheat varieties Cochise and Chilham arrived on last year’s AHDB Recommended List with fungicide-treated yields of 106 and 103 compared with Mulika at 96.

Both varieties are from breeder KWS, and along with group 4 varieties Kilburn and Alderon, the company is seeking to challenge the idea that profitability from spring cereals can only come with a premium contract.

John Miles, the group’s product development manager, says that for growers who have committed to growing a spring cropping area for grassweed control, setting up to grow a feed crop of wheat or barley can be more profitable than rolling the dice for a premium.

That means they don’t need to hold back on nitrogen like they would with a potential malting barley crop, at about 140kg/ha, but can open up to 170kg/ha to grab more potential yield.

Providing they are sown at competitive seed rates, he says there is little difference between the two crops for blackgrass control, and with the £10/t minimum bonus for feed wheat over feed barley, wheat is the more profitable option, netting growers about £75/ha extra.

Output isn’t the only consideration for growers selecting which spring crop to grow, and spring wheat has long been criticised for its later harvest date and susceptibility to ergot.

Mr Myers says he would not advise growers further north than Yorkshire to consider growing a spring wheat because harvesting may be too late.

There is no getting away from the fact that the crop is flowering around the highest-risk time for ergot, as it flowers after most other species which surround it, meaning there are a high number of spores in the vicinity, but the risk can be limited by keeping plant stress low.

Plant stress causes the glumes – the outer covering around the wheat flower – to gape for longer which can allow prolonged access for the dangerous disease.

Some forms of stress such as heat stress are unavoidable he admitted, but making sure crops are not grown in soils deficient in micronutrients, as well as ploughing to bury diseased material, will also have a role to play.

When should the switch from winter varieties to spring varieties take place?

Variation in the performance of wheat varieties only begins to emerge from late October, says KWS’s Mr Miles, and the kinder the weather, the seed-bed and the blackgrass conditions, the longer winter wheat varieties can be drilled.

That means growers should switch to spring wheat varieties sooner if conditions are poor, as they often are more vigorous later in the season than winter varieties, which require a vernalisation or prolonged cold period.

• Both speakers were addressing a round-table discussion hosted by KWS to discuss options for spring drilling next season.