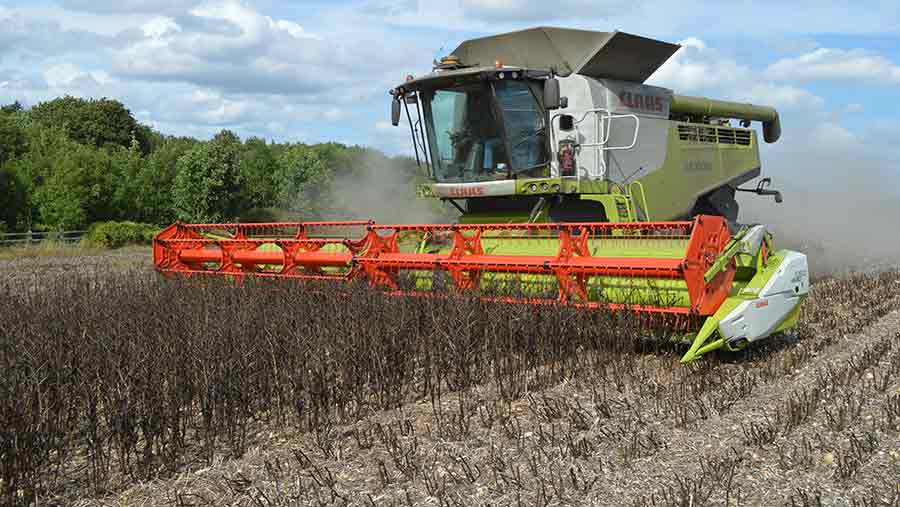 Replacing some of the farm’s pea area with beans on outlying fields has helped him cope better with pigeon damage and keep on top of blackgrass.

Winter beans made a return to the farm last season after an absence of over five years as Mr Sweet had often struggled to control chocolate spot disease.

“Last year, after finding that pigeons were causing greater pea crop loss than we were prepared to accept, we tried 60 acres (24ha) of Wizard winter beans instead,” he says.

Fields either surrounded by housing or with bad blackgrass were selected for beans on his farm near Whittlesey, just east of Peterborough.

“Parts of the farm where we can’t use bangers were obvious choices. Where the pigeons were really active in 2013, we’d only managed to cut 20 of the 35 acres of peas,” he adds.

A good rotation is a priority for Mr Sweet to keep blackgrass under control, and as well as pulses, the farm grows winter wheat, oilseed rape, sugar beet and he is considering maize for next year.

“Having a wide rotation gives us opportunities to get on top of blackgrass, by making good use of later drilling and spaying off successive flushes of the weed, as well as using different chemistry,” he says.

The beans were drilled on very different dates – with a 16ha block going into the ground in October and the remaining 8ha having to wait until 20 January.

“The weather interfered with our plans, so we ended up drilling the second block much later than intended. Although they took a while to come through, they then made rapid progress,” he says.

Despite its late start, that crop yielded 5t/ha, reports Mr Sweet. As a seed crop he was able to earn a premium, while the only additional cost from such a late sowing was an extra black bean aphid spray.

He was also able to use two more glyphosate herbicide sprays before the later drilling, to deal with emerging blackgrass.

The October-drilled crop also did well, but was grown on much lighter, drought-prone land.

“It looked stunning but then ran out of moisture when the hot weather arrived in June and July. Yields ended up at 3.5t/ha,” he says.

Both areas have been followed with winter wheat this autumn.

“Beans have such a benefit for the rotation. Apart from the nitrogen they leave behind, they have a very beneficial soil conditioning effect,” he says.

This year, he is planting winter beans again. He adds that Wizard is the variety that the end markets demand, but he is also going to try some Bumble, which is a new variety from seed merchants Wherry & Sons.