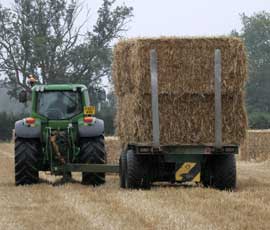 Rod Smith has finished combining at Beal Farm, Berwick upon Tweed, Northumberland, but has had a difficult year from start to finish.

“With a wet and cold start for all of the crops, I think we can say it’s been the worst year we’ve ever had,” he said.

The Golden Promise and Odyssey spring barley yielded a very disappointing 4.9t/ha, and came off at around 16-17% moisture.

“It was five weeks late going in, which really affected performance,” said Mr Smith. “The cold wet start resulted in poor crops all round, as nothing managed to get away once it was drilled.”

The Horatio, Croft and Scout wheat also looked to be disappointing, although yields had not yet been confirmed.

“If we hit 7.4t/ha I’ll be happy, yet the farm average is usually over 9.9t/ha. The straw length was so short that we hardly had to use any growth regulator,” he added.

Scout and Croft seed quality was very good, but Horatio was very poor and not in the equation for next year.

“The only bright side is our cost savings, as most crops haven’t required any drying as moistures have been good across the board,” said Mr Smith.

He was hoping to begin drilling winter wheat at the beginning of next week (w/c 9 September).

“It’s been a very difficult year and one to write off. I think we can safely say we’re all looking forward to next year.”