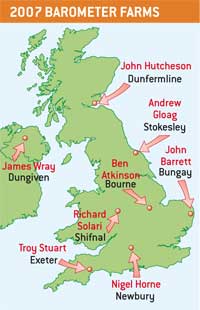 Not all set-aside land on Farmers Weekly‘s Barometer farms will be returned to cropping under a zero regime, Andrew Blake discovers

Only about a quarter of Troy Stuart’s set-aside is likely to come back into production.

“When the field margin width requirement was reduced we put a lot of areas beside hedges and trees into 6m margins, and it makes a lot of sense to leave them,” he said.

“They’re not very productive, we can use them to drive over, and it means we can maintain our hedges in winter when we want to.”

The 25% to be re-cropped will generally be in larger fields with smaller hedges, he explained.

For Nigel Horne, zero set-aside will have no great impact.

“Apart from the bureaucracy aspect it won’t make a lot of difference to us. We’ve always grown industrial rape on our set-aside, so it will now just become commercial.”

John Barrett estimates about half last season’s set-aside on the farms he manages will be cropped.

“It’s mostly the rotational bits and they’ll be in second wheats with some oilseed rape, although some of the lighter land will go into spring barley.”

Until now Richard Solari has usually sown his set-aside with a cocksfoot/clover mix after ploughing pig-mucked winter barley stubble. It provides an ideal entry for potatoes, he explained.

But given earlier uncertainty over what the rate might be, the fact that some of the winter barley was still unharvested after flooding and his manure source has given up pigs, he remained undecided on next season’s strategy.

Better grain prices mean Ben Atkinson will sow all his set-aside this season.

“We shall be wall-to-wall cropping. With prices as they are, second wheats come right back into play.”

For Andrew Gloag zero set-aside will not alter his cropping or production some of which has long been industrial wheat on contract at £7/t below feed price. About 4% of his area, behind woods and in game covers will remain untouched.

“The only difference will be that I’ll be able to sell about 450t of what was previously industrial wheat at the full market price.”

Only about half John Hutcheson’s set-aside will be returned to cultivation.

“The rest is permanent set-aside in small fields and on poor land. Some has been down since 1992 and will probably never come back into the fold.”

“We also have a block of two 30–acrefields which are very prone to pigeon damage.” There, a wheat/set-aside fallow/wheat rotation devoid of oilseed rape will be retained, he explained. “It means we can get the land ploughed up in good condition.”

Reverting to a zero set-aside policy makes sense in the tighter grain market. “But we’ll always have a bit of land left to help look after the environmental aspects and address genuine concerns.”

Having only 10ha (25 acres) of set-aside, all rotational, James Wray says its effective absence will make little difference to his largely rented operation.

“We’ll just be sowing a bit more wheat or barley which we’ll handle no problem.”