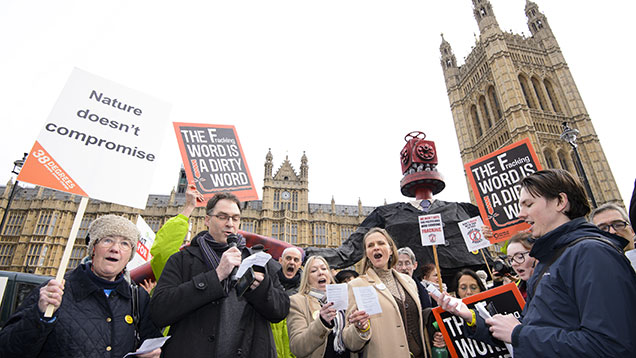 Heated debate and public protests surrounded the vote on the Infrastructure Bill (26 January), which will have big effects on the countryside.

The bill, one of the most far-reaching of the past few years, covers everything from fracking rights to the reintroduction of beavers.

It is controversial because of its wide-ranging measures and the introduction of many late amendments, which critics argued means MPs haven’t had enough time to properly consider it.

The bill now goes for final consideration of amendments by MPs and the House of Lords.

Here’s what farmers and landowners need to know:

1. Fracking firms will be allowed to drill without a landowner’s permission

Trespass laws will be changed to allow fracking companies to drill under people’s land and homes without their permission, including horizontal drilling. They will also be allowed to “leave any substance or infrastructure in the land”.

This controversial change was not put to a vote during the debate, despite it being the object of huge public opposition.

A vote to put a moratorium on fracking activities was lost by 308 votes to 52, with many abstentions.

Fracking activities will not be allowed unless they meet 13 conditions that go some way to protecting the local environment, water sources and health of local communities.

2. Farmers and landowners will not receive separate compensation for fracking activities on their land

Fracking companies can choose to pay £20,000 to the local community and 1% of revenue. This is voluntary and “community” is undefined.

This means there is no provision for payment to the owners of land where the fracking takes place. An amendment which would have meant fracking companies had to pay compensation to landowners was not debated because there was not enough time.

3. Landowners will be notifed of fracking activities

Landowners with fracking taking place under their land will have to be notified of these activities. However, fracking will still be allowed to take place as long as it satisfies the 13 conditions (see point 1 above).

4. Landowners will have a baseline to compare land pre- and post-fracking

Land that is due to be fracked will have to be assessed and monitored for 12 months beforehand to create a baseline. This means that if fracking activities then cause problems (such as pollution), the landowner has a baseline to compare this against.

5. Fracking will (supposedly) be banned in protected areas

The government said it had agreed “an outright ban on fracking in national parks, sites of special scientific interest and areas of outstanding natural beauty,” even in “exceptional circumstance” (as the government had previously proposed).

But there was no reference to the amendment and it was not voted on, so it remains to be seen whether this makes it into legislation.

6. Landowners with phone masts on their land will be able to negotiate fees and other contract terms with their tenant telecoms company

Government proposals which would have allowed the secretary of state for culture, media and sport to step in and decide what a landowner could charge an operator for site use, were removed from the Bill after being put forward only one week ago.

The existing telecoms code will continue.

Chris Bryant, Labour MP for Rhondda, accused the government of putting forward a “magic deal that was being done with the mobile telephone operators”.

7. Beavers released into the wild will be exempt from control measures

Eurasian beavers being released into the wild (under licence) will be exempt from control provision.

This could have implications for disease or population control and there may be issues with woodland and waterways from their activities.

“We welcome that [MPs] have heeded our call for legal recognition of the need for baseline monitoring of environmental conditions, this is important as part of potential future concerns over liabilities for environmental impact.

“We do not understand why ministers have decided, at this early stage, to limit Natural England’s ability to control reintroduced beaver populations in the future. Uncontrolled growth in the beaver population could have significant negative consequences for our river and woodland habitats over the long term.”

“Some 360,000 people signed a petition opposing [allowing fracking companies to drill without landowner consent] and 99% of those who responded to the government consultation opposed it as well.

“To see the government just flinging that back in people’s faces, simply not listening to the consultation, raises big questions about what the consultation is for and undermines the credibility of the process.”

“We are aware that the government has ‘included provisions in the Infrastructure Bill to protect landowners against claims made by third [parties]’ – but the NFU would like to see a similar exemption from liability extended to agricultural tenants as ‘occupiers’ of the land.

“The NFU will continue to follow the progress of the Infrastructure Bill, and any major concerns we have remaining will be communicated back through government departments to encourage late government amendments.”