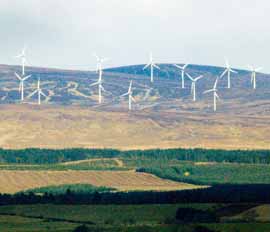 The renewable energy sector in Scotland has been boosted today (11 November) after Chancellor George Osborne made an additional £103m of funding available.

The money will come from the fossil fuel levy, which is essentially a carbon tax introduced in Scotland in 1996 that raises money from traditional energy sources to invest in renewables.

Scottish Government finance secretary John Swinney said the announcement was “long overdue”, but welcome. “For too long Scotland’s money has been sitting unspent in an Ofgem account in London,” he said.

“We have consistently pressed the UK government to deliver a pragmatic solution that accelerates the release of funding for renewable energy projects that are ready to go now in Scotland.

“The proposal we put to the UK government has at last broken this logjam and made over £100m additional funding available now – vital funding to support further renewables investment, and make the Green Investment Bank a reality for ongoing support.”

“Each year tens of millions of levy surplus is generated south of the border, but this goes straight into treasury coffers. If this could be netted off against any overspend on Feed-in Tariffs – perhaps in a way which helps the poorest with their electricity bills – government could potentially allow a successful policy to flourish.”