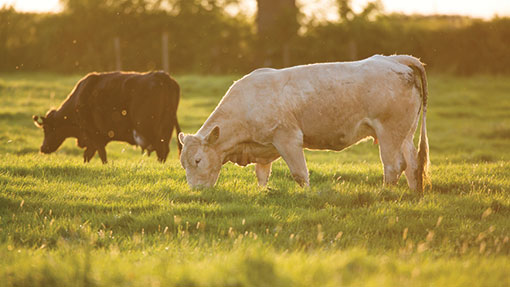 Meat processors have responded to farmer anger over falling beef prices by calling for a long-term strategy for the industry.

The all-steers deadweight price lost another 6.3p/kg this week and has now plunged 53.6p/kg since this time last year.

Two of the biggest processors are this week reportedly paying a base price of 320p/kg and 325p/kg, well below the British all-steer average of 346.5p.

Farm leaders predict the price pressure will discourage investment in stock and could threaten the sector’s prospects, with the suckler herd already shrinking about 3% a year.

“The bigger picture for everybody is we need a longer-term vision for the way this supply chain functions,” he said. “I think levy boards are the forum for charting the course in the future.”

Mr Rossides also said British beef was the most expensive in Europe, so would remain under pressure from imports unless farmers cut back costs of production.

Irish beef imports rose 11% in the first two months of 2014, and are more than 45p/kg cheaper than British beef on average.

“The bigger picture for everybody is we need a longer-term vision for the way this supply chain functions.”
Stephen Rossides, British Meat Processors Association

“Efficient livestock farmers make a fair return and that there is profitability across the whole supply chain is important,” he said.

“But there are too many farmers not looking carefully at their costs and not producing efficiently.”

The last EBLEX stocktake report showed the average beef finisher taking stock to more than 16 months was losing £88.81 a head in the year to March 2013, while the average lowland suckler herd was losing £236.72 a cow.

Meat processors were not keen to comment, but a spokesman from one of the largest said sitting down collectively was “long overdue”.

EBLEX sector director Nick Allen said long-term prospects remained positive. “If there is a will to discuss a strategy to ensure that the industry is better placed to respond to the next incident of price volatility, then it would be EBLEX’s role to co-ordinate that. We would be keen to do so,” he said.

Opinion: Sector needs to come together if it is to protect the UK’s world-class beef

The processors’ call for a long-term strategy shows no one is immune from the sharp drop in consumer demand.

Business analyst Plimsoll Publishing has given 28% of UK meat companies a caution or danger rating, with margins under “severe competitive pressure”.

The bottom line is fewer people are buying red meat: four million British shoppers never buy beef and a mild winter did not give sales their usual seasonal boost.

Cheaper Irish imports might be up on the year, but supply is fundamentally tight across Europe, and the shrinking suckler herd is set to become even smaller.

After horsegate, prices rocketed, supermarkets called for more beef and farmers were confident. A year on, we’re discussing the industry’s future is at stake.

Britain needs to keep turning out world-class beef at a price the recession-hit public can afford.

Farmers and processors can keep trimming costs, while supermarkets can use some of their margin to get consumers back on to beef.

More consistency on pricing for farmers would help, as could clearer messages about what stock abattoirs and supermarkets need.

But all parties must work together to form a plan which is a long-term cure – not a short-term painkiller.