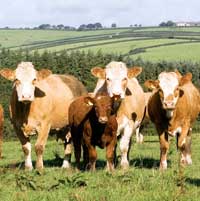 Prices of commercial beef breeding cattle have risen by more than a third since last October, according to latest figures from AHDB meat services.

Sired breeding cow prices averaged £1289 a head in May, 22% (£230) more than May 2008, as prices followed the usual seasonal trend and generally stronger beef markets.

Since the start of 2009, beef sired pedigree bull prices have been consistently higher. Average values for 18-24 month-old pedigree bulls peaked in February at £4,924 a head, 20% higher year-on-year.

The AHDB figures also showed that dairy cattle prices had increased, but to a lesser extent. Prices peaked at £1,440 a head in February this year, up 2% year-on-year. However, average prices that month were 14% higher than the same period last year.

Dairy cow prices eased in March and April, but strengthened to average £1327 a head in June.