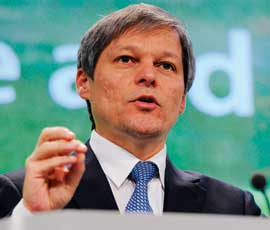 Proposals for farmers to place 7% of their land in designated ecological focus areas could largely be met without taking additional land out of production, Mr Ciolos told reporters in Brussels. Instead, these areas could comprise trees, field margins and other non-productive areas, he said.

“Applying these measures intelligently will not have a significant impact on production,” said Mr Ciolos. It was right that 30% of direct payments should be dependent on individual farmers adopting “greener” land management practices, he added.

Farm leaders in the UK and other European countries fear the 7% proposal would be tantamount to the return of setaside. They have also voiced concern over a proposed ban on ploughing up permanent pasture and rules requiring arable farmers to grow at least three crops.

The 90-minute audience between Mr Ciolos and more than 140 European agricultural journalists on Tuesday (6 December) marked a new offensive in the European Commission’s battle to win support for its CAP reform plans from farmers across the continent.

The so-called three-crop rule was the sort of common sense that was taught at agricultural college, said Mr Ciolos And he dismissed suggestions that ecological focus areas were nothing more than set-aside in disguise. “The 7% is not seta-side,” he said.

But taxpayers had certain expectations of farmers. The aim of the CAP reform proposals was to pay farmers to produce food while progressively introducing practices that promoted biodiversity and ensured the protection of natural resources such as soil and water.