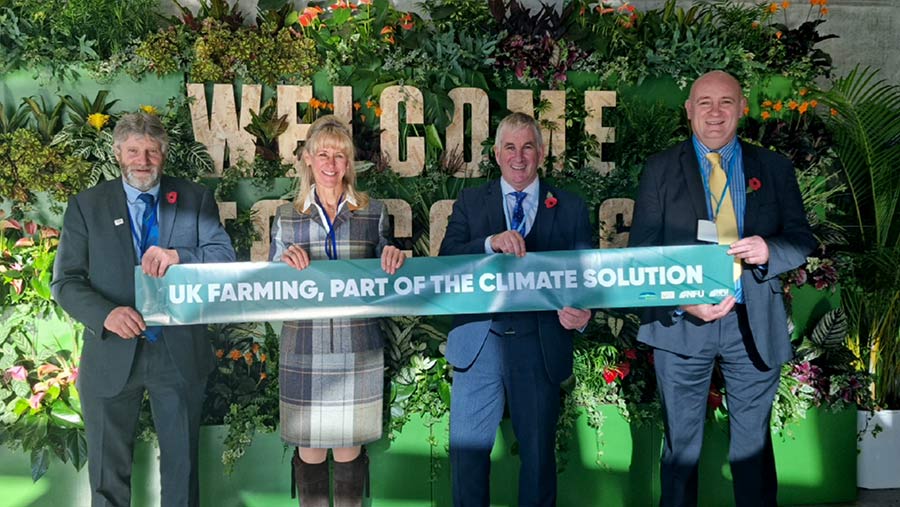 Four UK farming union presidents have called on the UK governments and global leaders at the COP26 climate talks to support a sustainable and productive future for farming.

It urged all governments “to support a sustainable and productive future for agriculture, growing our ability to produce climate-friendly food at the same time as protecting nature and the planet”.

The statement explained that UK farming was a uniquely versatile sector which supplied food, captured and stored carbon and helped to generate clean energy.

“But our farmers are also on the frontline of climate change impacts, being particularly vulnerable to extreme weather events,” the statement said.

“We want agriculture’s role in taking action on climate change while producing for the future to be widely recognised, at COP26 and beyond.”

The presidents emphasised that farmers harnessed inherently variable, biological processes in their crops, livestock and soils.

But they said farmers should be supported in partnership with government and industry to produce more with less environmental impact.

“It is vital that agriculture, land use and biodiversity policies are practical and properly funded, with a portfolio of measures across many different farm types.”

These should include a fair share of water and better protection of agricultural land from flooding.

The union leaders concluded that adopting a holistic approach to farming – considering food production, biodiversity, landscapes and communities alongside climate mitigation – would ensure a just transition to net-zero farming in the future.