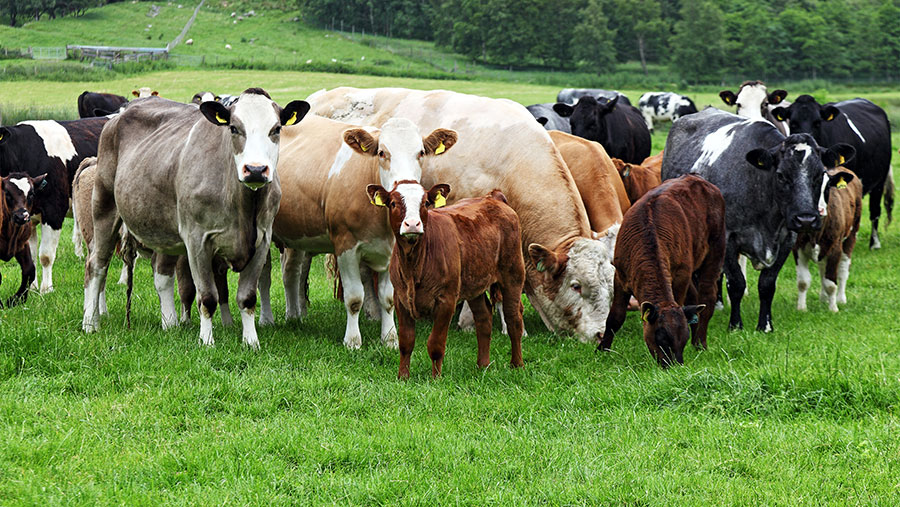 Livestock farmers and the industry must act now to cut methane emissions – or face fighting a losing battle over stock numbers.

The stark warning was issued by Nigel Miller, the head of the Ruminant Health and Welfare Group (RHWG), who also farms 607ha in partnership with his two sons in the Scottish Borders.

“Dairy, beef and sheep production across our four nations are already firmly in the crosshairs over methane,” said Mr Miller, a qualified vet and former president of NFU Scotland.

“The Climate Change Committee has been clear that a reduction in red meat and dairy consumption of 20% is integral to the UK’s plan to reach net zero.

“The truth is ruminant sectors can no longer shelter behind carbon efficiency alone. We must use this pledge to trigger a change in mindset and take control of our share of the problem.”

More than 100 countries, including the UK, have signed up to a COP26 initiative to reduce methane emissions by 30% by 2030. Mr Miller believes the methane pledge will be a “tough step in a climate change transition marathon”, but it is a “feasible goal” if the industry acts quickly.

He said the management focus over the next decade must be on reducing methane to protect the future of dairy, beef and sheep producers.

Each producer will need to aware of their own farm’s greenhouse gas (GHG) emissions profile – the levels of carbon dioxide, methane and nitrous oxide their activity generates.

Measuring these gases will be a challenge, Mr Miller said. So, farmers will need a standardised GHG calculator to work off to better understand and reduce their own emissions.

Mr Miller said the industry is also on the threshold of having commercially available feed additives that have reduced enteric emissions in some trials by more than 30% (see “DSM to invest £100m on methane reduction in Scottish agriculture”).

DSM to invest £100m on methane reduction in Scottish agriculture

Dutch nutrition giant Royal DSM is to invest more than £100m in Scotland, focused on reducing methane emissions in farming.

The investment, which has been supported by Scottish Enterprise, will provide the first global manufacturing site in Dalry, Ayrshire, for the company’s new methane-reducing feed additive “Bovaer”.

It will also boost the local economy with the safeguarding of more than 300 jobs and creation of 150 new jobs, including construction roles.

The feed additive has the potential to reduce methane emissions from cattle and sheep by approximately 30%, DSM says.

Ms Sturgeon said: “Our vision for the future of agriculture in Scotland is a positive one, with a clear, ambitious aim – to transform how we support farming and food production in Scotland to become a global leader in sustainable and regenerative agriculture.”

In the medium term, new genetics will offer a range of solutions, particularly heritable reductions of enteric emissions in cattle and sheep. Other traits such as mature weight and robustness might combine into a climate change index.

The Scottish government has just announced a £51m package to support farm carbon audits and planning. Similar support will be needed across all four nations, Mr Miller said.

According to Defra, UK agriculture is responsible for about 10% of the country’s GHG emissions that cause climate change.

In the UK in 2019, carbon dioxide accounted for about 80% of GHG emissions, methane about 12%, nitrous oxide about 5% and fluorinated gases made up the remaining 3%.

Methane emissions from UK agriculture account for about 5.5% of the country’s total GHG emissions.

The most significant sources of agricultural emissions are enteric fermentation from livestock, particularly cattle; and nitrous oxide emissions using fertilisers on soils.

The challenge to cut methane emissions by 30% should be welcomed by the UK livestock industry, according to Michael Lee from Harper Adams University.

That’s because the sector is already committed to supporting the NFU’s pledge to deliver net zero by 2040, noted Prof Lee, an expert in sustainable livestock systems.

This pledge includes a significant reduction in all greenhouse gases (GHG) and the potential to sequester significant carbon dioxide emissions through net primary production, soil and agroforestry.

Prof Lee said the UK livestock sector is already a global leader in terms of lower GHG emissions per unit of product. Advancements in livestock genetics, nutrition and husbandry have already proven that a significant reduction in UK livestock emissions can be achieved.

“These improvements will not only support a thriving UK livestock sector, which is world leading, but also deliver the 30% reduction in UK agriculturally derived methane,” said Prof Lee.

“But investment and support for the farmers and research to deliver these improvements at pace and continued future improvements is urgently needed, as once 30% is achieved, the sector should keep looking for further reductions.”

Prof Lee said methane is clearly a potent GHG, no matter if it is released because of mining fossil fuels, a leak from natural gas infrastructure, or a cow’s burp.