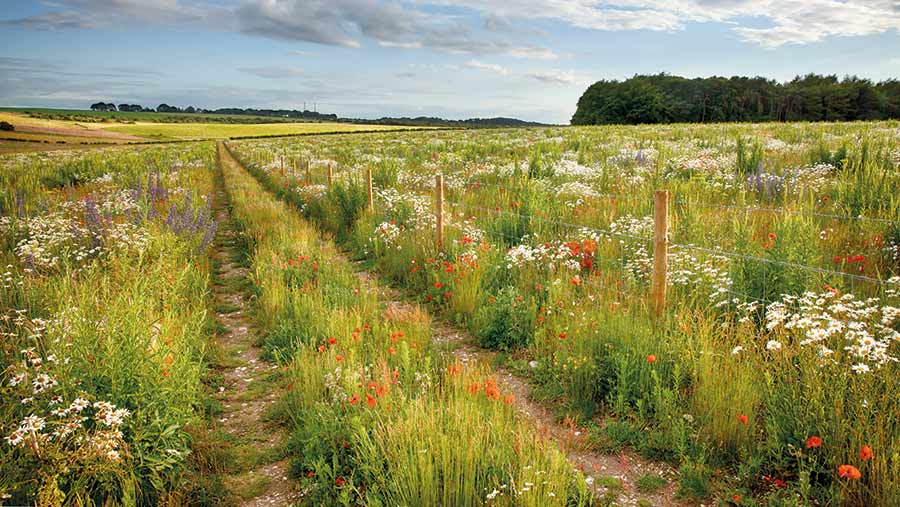 A market opportunity for farmers and landowners is emerging from new planning rules requiring developers to improve biodiversity.

Expected to be mandatory across England within the next two years, the biodiversity net gain (BNG) requirement means developments must demonstrate a 10% improvement in biodiversity after they have been completed.

In line with the government’s commitment to leave the environment in a measurably better state than it was found, BNG is a potential income stream arising from Defra’s natural capital approach.

This could help farmers as their Basic Payment Scheme funding continues to reduce.

See also: What farmers can do to unlock the value of natural capital

It comes at a time when nature has been recognised for playing an essential role in reversing further decline and increasing climate resilience, along with the economic benefits that ecosystem services provide.

“Both Defra and Natural England have been involved in developing BNG and are consulting widely at the moment,” says Jason Beedell, head of research at farm business consultancy Strutt & Parker.

“In effect, BNG means that any impacts that development has on biodiversity are minimised and offset as far as possible.”

Assessing the impact that any development may have on the natural environment is one of the main changes to planning in the Environment Act 2021.

The common standard, known as biodiversity units – which has been developed by Defra using its biodiversity matrix – will be the factor of account.

It is based on the extent of the habitat, as well as its quality, distinctiveness and condition.

“Before being granted planning permission, a developer will have to calculate the number of biodiversity units that the original, pre-developed site accrues,” explains Dr Beedell.

“They will then have to demonstrate how they will both raise that level by 10% and maintain it for 30 years.”

The calculations will be submitted to the relevant local authority that is implementing the new policy.

It will verify them, using the biodiversity metric to calculate any change that the proposed development will cause, before deciding whether the plans can proceed.

A number of pilot schemes have been operating round the country.

The current understanding is that there will be an overall set of principles, with local authorities then allowed to make some amendments according to particular regional requirements

“From the calculation process, there are two outcomes,” says Dr Beedell. “Either there will be a net loss of biodiversity units, or a net gain.”

While a net gain is unusual, it can occur. “There are housing developments which include a wildlife area in the plans, for example, to enhance biodiversity.

“They don’t always sit very well together in practice – wildlife sites can look scruffy compared to a neat and tidy housing estate that many house buyers want.”

In most cases, there will be a net loss in biodiversity units.

This is where the opportunity for farmers and landowners comes in through BNG, as the developer then has to create or enhance the habitat either on the site, nearby or next to it, or buy units from a third party.

“That could be a habitat bank or a wildlife trust, or a farmer,” says Dr Beedell.

While this can be anywhere in the country, most local authorities will want to keep it within their boundary.

For a farmer or landowner to benefit, there are various options.

They can make land available for BNG through a recognised broker, enter into an agreement with a land bank or deal with a developer direct.

“The latter has been the most common approach to date,” says Dr Beedell.

As to whether individual farms will be able to benefit, the demand for BNG is related to the amount of development being carried out nationally, so there is likely to be greater demand in the south of England.

It applies to all types of development, with the exception of very small projects.

“We did some research which suggested that there will be an annual demand of 6,000-7,000 units/year.”

Anyone interested in BNG should approach it with an open mind, he advises. “It won’t be for everyone and you have to be good at biodiversity management.

“They are long-term agreements, so may be more attractive to larger holdings, where an agreement takes up a smaller proportion of the land.”

Tenants are not excluded from BNG, but they will need agreement from their landlords before signing up. “This is long-term land use change, so there has to be consultation.”

What happens at the end of 30 years?

The best solution will be to put the land into a suitable agri-environment scheme or some extension related to BNG, says Dr Beedell.

“Putting it back into production may be possible, but will be challenging where trees have been planted,” he adds.

Most biodiversity net gain agreements are for at least 30 years, so farmers must be in it for the longhaul.

The theory is that any land entered will also be eligible for Environment Land Management, although that is still to be agreed.

Stacking of credits may be possible too, says Strutt and Parker’s Jason Beedell.

“There’s potential for both biodiversity and carbon credits from the same parcel of land, or water credits if any trees planted are in the right place to fulfil that purpose,” he says.

“We are waiting for clarification on these things.”

Where an arable field becomes a wildflower meadow in an agreement, for example, it can be mown, grazed or cut for hay in an appropriate way, so a production element is possible.

Local authorities will keep a register of sites and be responsible for monitoring them, with penalties applied if they are not delivering the biodiversity gain expected.

In practice, it is likely that the responsibility will be placed on the farmer or landowner – perhaps with the help of an ecologist – to verify what is being delivered.

Payments will set the market, says Dr Beedell. Experience to date suggests that this is very variable, ranging from £3,000/unit to as much as £80,000/unit, spread over 30 years, with an estimated average of £20,000/unit.

That figure is before costs, he stresses, but could account for 50% of the payment.

Having to sow or plant, maintain and monitor the site could cost in the region of £600/ha a year, which still leaves an equal amount for the farmer or landowner.

As Dr Beedell points out, that’s better than many cropping and stewardship options in most years.