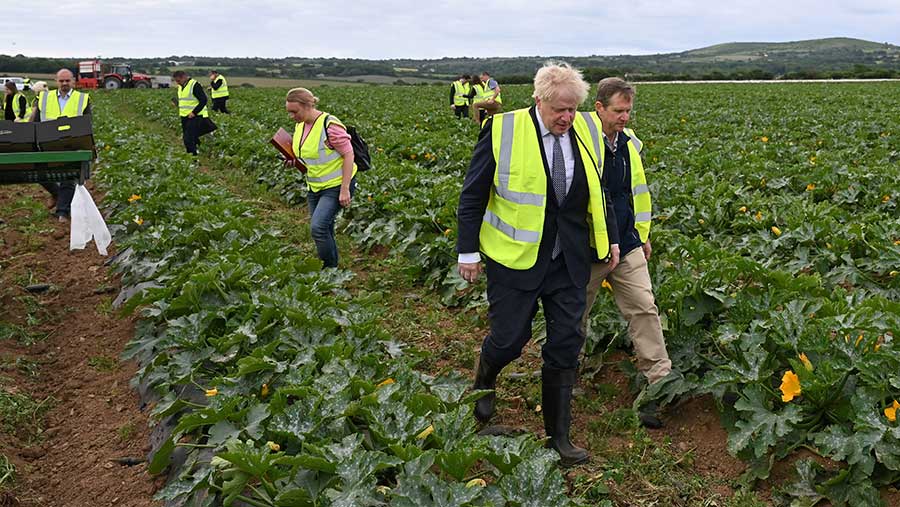 Boris Johnson has pledged to back British farmers to increase food production, create jobs and unlock growth in the rural economy – but critics have branded his plans as “half-baked” and “bordering on preposterous”.

The government launched its new Food Strategy on Monday 13 June following the independent review of England’s food system by Leon restaurant co-founder Henry Dimbleby last July, which set out an analysis of the challenges facing the food system.

The 33-page document (PDF) includes incentives for industry and investment in research which will help farmers harness technology in farming, such as sustainable and efficient glasshouses, to increase home-grown fruit and vegetable production and create new job opportunities across the country.

About £270m will be invested across farming innovation funding programmes until 2029, designed to unlock technologies to drive sustainable farming techniques, increase productivity and profitability, and improve the sector’s long-term resilience.

Mr Johnson told Farmers Weekly: “I will always back British farmers, and it’s thanks to the hard work and dedication of the industry that we enjoy a healthy and resilient supply of quality home-grown food all year round.

“Farmers Weekly readers should be in no doubt of this government’s commitment to protecting and boosting this industry.

“That’s why this strategy will help safeguard our food security for the future, harness new technology to grow sectors with the biggest opportunities, and make sure we grow and eat more of our world-renowned British produce here in the UK.”

Despite mounting fears that global shocks, especially Russia’s invasion of Ukraine, had left Britain’s food supply vulnerable, there is no mention in the strategy of setting a minimum target for domestic food production – something the NFU has been calling for.

Instead, the government has broadly committed to maintaining the current level of domestic food production and increase it in sectors where there are the biggest opportunities, such as horticulture and seafood.

NFU president Minette Batters met the prime minister at a farm in Devon on Friday (10 June) and she told him that farmers were furious with the government’s post-Brexit agricultural policies, which would leave them at a competitive disadvantage to foreign producers.

In an interview with LBC radio on Sunday (12 June), Mrs Batters said it was great to have a commitment on self-sufficiency, including promises to grow more of our own fruit and vegetables, as well as more local and British food.

“I think the challenge now is making sure the policy behind all of this can deliver on the ground,” she added. “But ultimately, this is a white paper. This is the start of the journey.”

Mrs Batters said farmers felt frustrated with the government’s “very strong focus” on environmental delivery alone, including legislated pathways on trees, nature, taking land out of production and species reintroduction. Alongside this, there is a “massive commitment” to house building and green energy.

“The challenge is around land use. For farmers across the country, 75% of the UK is a farmed landscape,” said Mrs Batters.

NFU President @Minette_Batters has met with the Prime Minister @BorisJohnson to discuss the importance of British food and farming #BackBritishFarming 🇬🇧👨‍🌾 pic.twitter.com/qh4EEBGIay

“Farmers are saying, ‘Come on. First and foremost, our duty is to produce food’. And we want to work with government on policies to achieve that.”

The government’s strategy has been heavily criticised for failing to tackle the soaring cost of food, the climate emergency and overlooking key recommendations in Mr Dimbleby’s independent review of the food system.

In his review, Mr Dimbleby had urged the government to guarantee the current budget for farm payments until at least 2029 to ensure farmers are “properly recompensed” to transition towards more sustainable farming practices.

But the government’s strategy only repeats its pledge to guarantee funding at the same levels for the life of this parliament.

Calls for a sugar and salt reformulation tax appear to have been ruled out. But the government insisted it had listened and accepted the majority of Mr Dimbleby’s recommendations.

The document also contains radical ideas such as the use of “responsibly sourced wild venison” and vegan meals for school students and prisoners.

Labour branded the government’s strategy as “nothing more than a statement of vague intentions”.

Shadow Defra secretary Jim McMahon said: “The UK is in a cost-of-living crisis, with food prices spiralling, real wages falling, growth plummeting and taxes up. It is clear now that the government has absolutely no ambition to fix the mess they have created.

“A food strategy is of vital importance, but the government has dithered, delayed and now failed to deliver.

“This is nothing more than a statement of vague intentions, not the concrete proposals to tackle the major issues facing our country. To call it a ‘food strategy’ is bordering on the preposterous.”