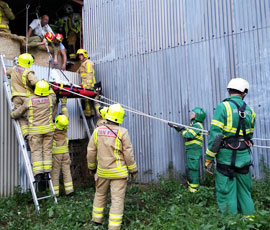 A farmer has been rescued after he fell 30ft from a farm roof and became wedged in a stack of hay bales.

The accident took place on a farm near Clun, Shropshire, on 15 September.

The farmer, who has not been named, had been repairing a metal roof from the inside of a large outbuilding when he fell through the bale stack, on to a concrete floor, fracturing his leg.

Fire crews set up rope rescue gear as the paramedics climbed down to the injured man and administered pain relief.

A West Midlands Ambulance Service spokesman said: “The man landed in between two stacks of hay and became trapped due to the density of the bales and the extent of his injury.

“This was a difficult and complex extrication, taking about two hours to rescue the man from the bales.

“The excellent teamwork between the two emergency services ensured he was in safe hands and given expert assistance and treatment throughout the rescue,” added the spokesman.

“The paramedics and fire personnel carried the man a short distance on top of the bales to a gap in the side of the building.

The farmer was then winched down to the ground outside before being airlifted to Queen Elizabeth Hospital in Birmingham for further assessment and treatment.”

Visit our health and safety page for updates