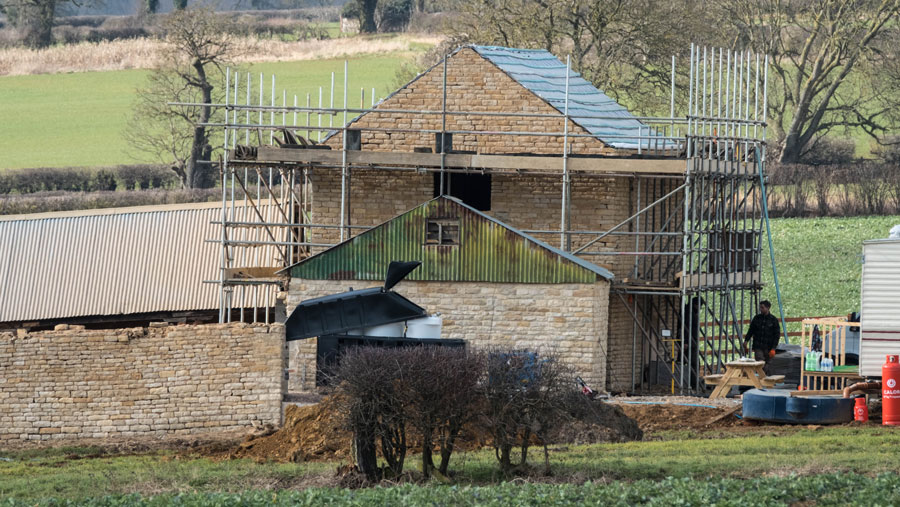 More and more farmers are exploring opportunities to convert ageing or redundant buildings in a bid to raise revenue as BPS support falls.

There are opportunities aplenty, but beware the pitfalls, says Matthew Berryman of farm business consultant CLM

Different planning authorities have widely varying attitudes. They all broadly work to the National Planning Policy Framework, but interpretations can differ.

Whether you have a residential, commercial or mixed project in mind, find out about your local authority’s attitude to that kind of development.

Some, for example, may be very open to residential proposals if they’re falling behind on their targets for land allocated for housing.

Recently, many local authorities have issued “Calls for Sites”, highlighting that insufficient land has been identified for residential development.

Farmers and landowners can put forward sites of any size or type, which will then be assessed as potentially suitable spots.

Proposals can be for any type of land use, including residential, commercial, retail or leisure and, while this won’t in itself determine whether a site should be allocated for development, it does inform councils’ zoning decisions.

Build up a picture of the national scene for context, then layer on the local policy – in principle and practice. Also look for precedents in your area.

Asking such questions (it’s also worth talking informally with a local planning officer at an early stage) might help you make sure you’re knocking on a door that will open relatively easily when shaping your proposal.

One choice a landowner faces is whether to get planning permission and sell an unconverted building at that stage, or take it through to completion and then sell or let it.

Many tend to opt for the former because it avoids having to make such a big investment and limits their exposure to risk. Take a barn that’s worth, say, £375,000 with residential consent.

You could spend the same amount again developing it. If the housing market stays strong and it sells it for £1m, great – but what if the market plummets?

Others also may not have access to the money required, or don’t have the time and skillset required to oversee a development.

Not necessarily, as an example I was involved in demonstrates.

A two-acre site of a former dairy unit seemed ideal for residential use and the owner’s vision of four new luxury homes and four barn conversions, with each plot valued at £350,000, seemed more than achievable.

An experienced developer soon spotted costs not seen by the owner, resulting in the site’s value being downgraded from £2.8m to £1m.

But all was not lost. The owner had already let half of the buildings, generating a rental income of £100,000/year.

After finance and admin costs, the 15% return turned out to be a much better result than selling the site for residential development and the buildings remain in the original owner’s control.

Most landowners avoid selling assets unless there is a compelling reason to do so, such as a means of buying out retiring partners, helping children on to the property ladder or to enable debt repayment.

The latter particularly raises an important question: Why use cash from a property sale to repay a loan if the business is already meeting repayment obligations from generated profit?

An example: Five years ago, a business borrowed £1m to buy a neighbouring farm and took a 20-year loan with interest fixed at 5%.

In the absence of an alternative investment opportunity with better prospects, paying off the outstanding debt with the cash raised by a building conversion would effectively give a return of 5% on the sale proceeds (assuming early repayment penalties weren’t too punitive).

Disposal of assets also raises other questions – and tax is top of the list. Contrary to speculation, the chancellor did not raise capital gain tax rates in last month’s Budget and business asset disposal relief (formerly entrepreneurs’ relief) can mean tax will be at 10% on qualifying assets.

If a sale is necessary, and if it is assumed tax rates will rise in the foreseeable future, perhaps the current regime is, in itself, a good reason not to delay selling an asset.

If there is some restructuring to do in the business – and/or debt to be repaid – now could be a good time to consider selling, especially if the building is “off-lying” and its disposal wouldn’t have any negative impact on the operational requirements of the farm.

If succession is a subject looming ever closer in your family, converting buildings to non-agricultural use (even just changing the planning status) prior to assets being transferred from one generation to the next could be a catastrophic mistake.

That is because buildings not deemed to be agricultural may not qualify for agricultural property relief (APR).

If, however, you run an enterprise from them yourself – even if it’s a non-farming one – it could qualify for business property relief, which effectively works in the same way as APR.

If age and health are on your side, then transferring potentially non-qualifying assets to children or other intended beneficiaries could be the solution.

So long as the transferor survives seven years from the transfer date, the disposal is effectively tax free.

However, caution is necessary. If the gifted asset is located in an operationally important location, make sure the worst-case scenarios are considered.

No business is immune from events such as death and divorce, both of which can spark unforeseen consequences.

The moral of the story is simple – if a succession issue is on the horizon, take tax advice and consider all eventualities, especially the unpalatable ones.

6. Recent changes to ‘use classes’

A new “use class” – E – was introduced last year which gives extra flexibility when it comes to changes of use.

It groups together commercial, business and service uses, encompassing uses as varied as shops, offices, restaurants, gyms and nurseries.

Now, the use of a building can change to another use (or mix of uses) within this Class E without the need for planning permission.

So if you have a planning consent in place for a changed use of a building, you may be able to change the nature or use of the building without having to reapply.

7. Now could be great timing

Boris Johnson’s commitment to “build, build, build”, combined with the government’s determination to inject momentum into a Covid-ravaged economy, is prompting planning authorities to approve decisions that, in times gone by, might have been refused.

Even lockdown does not seem to be acting as a barrier for planning permissions being granted, but this does not mean that anything less than a carefully prepared application will do.

Submitting planning applications is never cheap – fees for planning consultants, architects and the raft of surveys can accumulate to an eye-watering sum.

However, none will be more expensive than a poorly presented application that fails.

See also: How to meet environmental requirements when developing land

The Covid-19 pandemic has prompted many people to move out of London and other towns and cities to rural areas.

Factor in the increase in working from home (which will free some people from having to live close to railway stations and major roads) and new parts of the countryside will appeal to residential buyers.

Published in February, the latest national government statistics, based on Land Registry data for the year to December 2020, showed the average annual price rise for a property in England was 8.5%.

The figures, which reveal the biggest increases to be in regions outside of London, suggest opportunities are available throughout the country and not just in the relatively prosperous South East.

In the North West and the East Midlands, for example, the figures were 11.2% and 10.6% respectively.

Having non-farming residents close to agricultural activities has the potential to bring conflict, but projects can be designed to minimise or eliminate this risk.

9. Commerce in the country

Retailers and other businesses may look to relocate from urban areas after the pandemic. With ever more going online, fewer need a traditional “shop’’ with customer footfall – they’ll simply need a functional space to operate from.

Obviously one of the critical requirements is fast broadband, while some would-be tenants are prepared to pay a premium for parking and a pleasant office environment, ideally with access to green spaces.

Look at what others have done successfully (and not so successfully) around you and learn from them. Just because somebody else has done something two miles down the road, doesn’t necessarily preclude you from also doing it successfully.