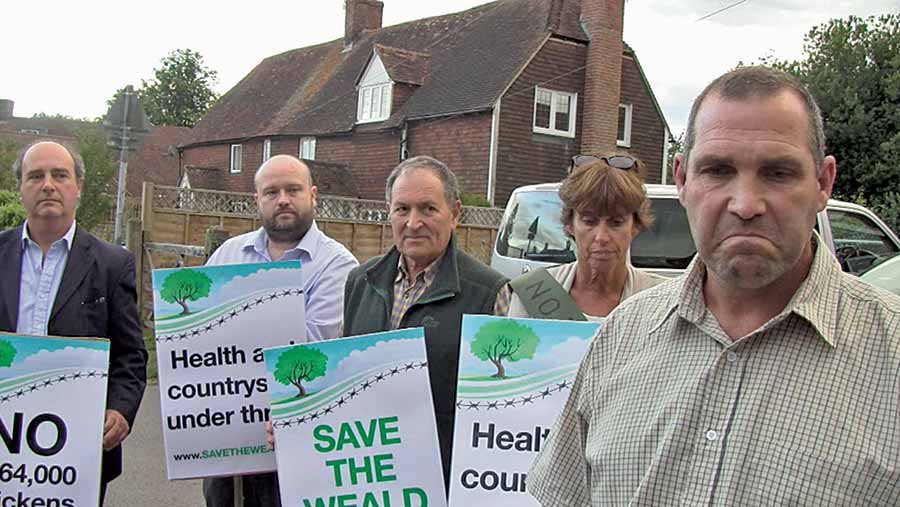 A planning dispute has broken out in a Kent village characteristic of those across the country – local residents opposing the erection of a new poultry unit.

This one, however, is slightly different. It is a proposed free-range egg unit on a site well screened from roads, with no pathways nearby and few houses in the vicinity. It is an inconspicuous arable field – albeit one in an Area of Outstanding Natural Beauty – some 1.5 miles outside Horsmonden, near Tonbridge.

For Fridays, the farming business that bought the 80 acre field, it is a perfect place to expand. For Save the Weald from Fridays, the campaigning group set up to oppose the development, it represents an industrialisation of the countryside.

The Friday family say they are responding to market demand for free-range egg, and want to grow their farming business. The field they bought is close to the A21 – a main road that will take eggs straight to their headquarters in nearby Cranbrook and return feed to the farm.

The shed will house 64,000 birds kept to Freedom Food standards, with birds split into flocks of 16,000, and the range will be planted with nearly 10,000 trees.

At a public consultation, held in Horsmonden village hall in late July, Friday’s production director Andrew Watts said the reaction had caught the company completely by surprise. “The site has no neighbours, is well hidden – a lot of our farms are in areas of outstanding natural beauty.”

He told me that he felt a lot of the campaigning had been scaremongering; something the public consultation – a first for the firm – had been trying to counter.

It must have added significant cost to what is already an expensive endeavour. Mr Watts said the planning fee paid to the council alone was £27,000. A recent farm application had amounted to almost £70,000, when consultancy and other costs had been taken in to account, before the ground had even been broken.

“It’s quite a daunting thing,” he added.

Outside the village hall, the Save the Weald action group had bedded down for the day. They have well-designed logos and leaflets, a slick website and support from councillors and the local MP. They cite the ancient woodland, delicate watercourses and wildlife that will be disturbed. But the scale of the farm is what sticks as an issue.

Wendy Writer, a resident who lives close to the proposed development told me that the group was a collective of concerned residents. “This represents, for me, the industrialisation of the countryside.”

“We’re not against farming at all – but this is a chicken factory.”

She added that, with the farm employing just two full-time staff, and four part-time, there would be little benefit to the local economy.

Another local, Mark Pallet, has serious concerns for his fishery business. He said water from the site – and effluent from the birds – would run off into his carp lakes, the consequences of which could be disastrous. “My fish are priceless – you can’t buy them. There is 40-50lb carp in there. Those two lakes are a third of our income.”

“In my eyes the Environment Agency has really turned its back on us.”

Friday’s said it had accounted for the runoff, and would build a reed bed around the site.

Whatever the outcome of the planning committee, it’s clear that free range is not necessarily immune from the planning problems that have beset the broiler industry in recent times.

Visiting a village in the midst of such a dispute is an uncomfortable experience, with neighbours falling out with one another, tensions running high and, whatever the outcome, damaging publicity for the egg sector.