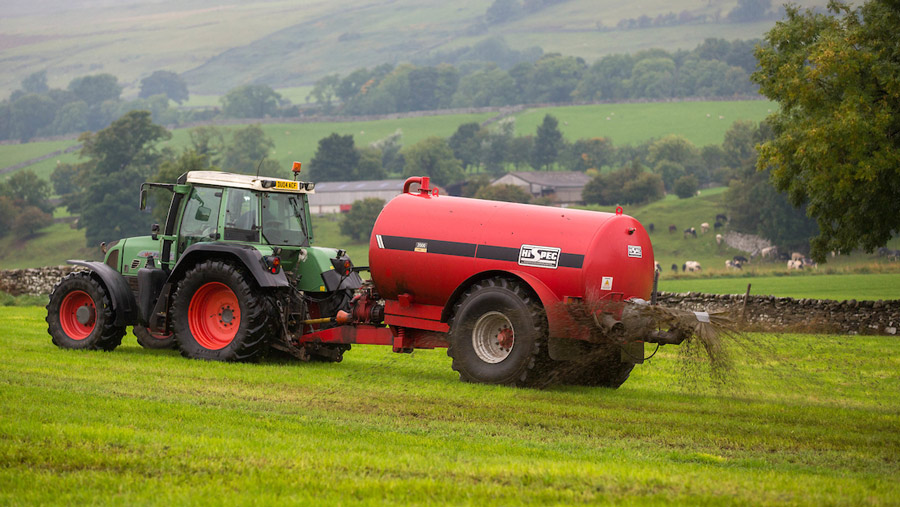 The proposals, which are within a consultation document published on 20 January, include outright bans on certain slurry-spreading methods.

There are also plans to enforce major improvement work on silage clamps and slurry storage.

Farmers have until 13 April 2021 to respond to the consultation via the Scottish government’s website.

The Scottish government said most of the 6.35m tonnes of slurry and digestate produced annually in Scotland were spread directly on to farmland.

Conventionally, this is carried out using rain guns or high-trajectory upward splash-plates on tankers.

But these methods contribute to higher ammonia emissions and Holyrood has proposed a complete ban on rain guns and splash plate, “swan-neck” or “bent-elbow” attachments.

Instead, farmers will be forced to use dribble bars, band spreaders, trailing hoses, trailed shoes or slurry injection.

The government acknowledged that this carried a potentially huge cost. To reduce the effect, it suggested a phased approach to enforcement after the proposed legislation was introduced.

Farms with more than 200 milking cows, 200 beef cattle or 800 fattening pigs or breeding sows would be given one year to comply. Farms with fewer animals would be allowed a five-year grace period.

However, this applies to slurry only. Because liquid digestate from biodigesters can be more susceptible to ammonia loss, all farms would have just one year’s grace.

Along with the slurry spreading rules, the government said all farmers would have to complete a risk assessment for manure and slurry in the future.

This would include mapping the farm to show:

Crucially, all stores would be brought into line with the proposed improvements.

Currently, farms with stores and lagoons constructed before 1 September 1991 are exempt from storing silage, slurry and agricultural fuel oil regulations. But this exemption would be removed and farmers allowed four years to upgrade or construct new storage. Any stores built after 1 September 1991 that failed to comply would be allowed two years to carry out necessary upgrades.

Like slurry stores, older silage clamps constructed before 1 September 1991 will no longer be exempt from the revised rules.

These farms will be given four years to carry out work while farmers with clamps built later will have a two-year transitional period to comply.

Further new rules apply ahead of the construction phase.

It has been practice for farmers to give notification 28 days before a new or upgraded clamp comes into operation. But, if the proposals go ahead, farmers will have to notify the Scottish Environment Protection Agency before construction starts.