Spreading slurry through an umbilical system can be vastly more efficient than running tankers, but it’s not always a practical proposition for every farm, particularly those with outlying ground a distance away from the main storage site.

While many umbilical contractors will charge on a volume basis with a price per cubic metre of slurry shifted, they also tend to bill on an hourly rate for their set-up time.

This approach allows for the vagaries of different units, with farm-to-field distances, road crossings and field sizes all having a big impact on how long it takes to get the job done. 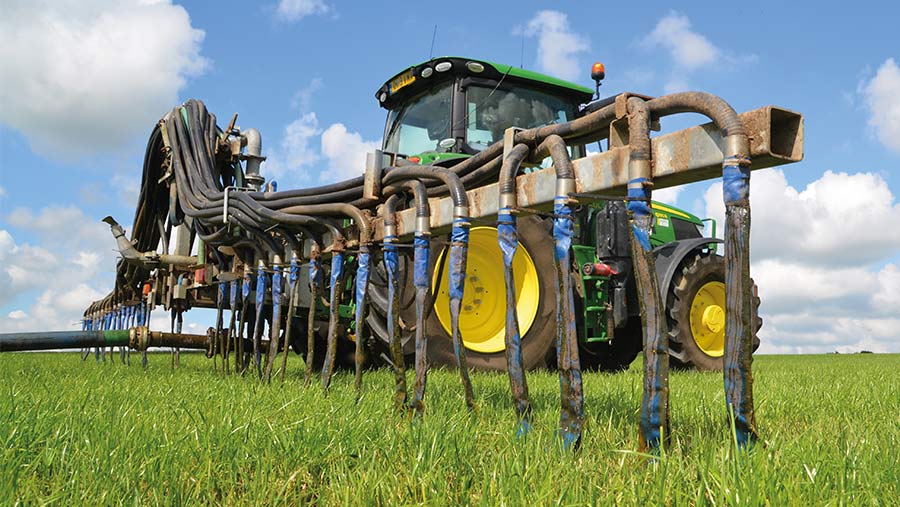 The more tricky the set-up, the more time it takes and therefore the more expensive the job becomes. But there are ways to streamline the operation and bring down the amount of time the team is on farm, reducing the overall cost of the job.

Wiltshire-based slurry specialist Paul Joseph offers some expert advice on how to get working efficiently.

What area offers the biggest opportunity to cut costs?

Layout, without a doubt – set-up time often accounts for a big chunk of the overall bill for umbilical applications. When working in small fields it’s not unusual for it to take longer to unroll, reel-up and relay pipes than it takes to do the actual work.

Simple things like the position of gateways can make a big difference.

If it’s necessary to pull pipes out beyond the target area to double back and get in through a boundary on the wrong side of the field, it’s quite possible that there will be an extra couple of hundred of metres of unnecessary pipe pulled out, which has all got to be reeled up afterwards.

Think about putting in easier-access gateways or openings in the hedge or fence that allow for pipework shortcuts.

Some farms install permanent steel pipes through hedges or under roads and tracks that make it easy to hook up a coupling either side – a low-cost option that can save many hours.

What about road/track crossings?

Setting up and taking down either an up-and-over road crossing or a ramp crossing takes time and you can be looking at anything from £50 to £150 a go. If you do three applications a year, the costs soon start to add up.

Moling under a track and installing an underground pipe might cost between £1,500 and £2,000 but it could save thousands in the long run. More importantly, it can mean it’s possible to spread on previously inaccessible ground.

With mindsets changing towards viewing slurry as a valuable nutrient source rather than a waste product, we’re seeing more customers going down this route.

If we end up with phosphate restrictions, which is a very real probability, livestock farmers are going to have to look at spreading further afield and that’s going to require investment in infrastructure.

Can the expense of a permanent underground main be justified?

It’s about looking at the long-term payback, but if it means we can reach every corner of a farm and only have to unroll enough pipe to spread each field then the set-up time and cost is going to be massively reduced.

If restrictions mean slurry has to be taken off farm, reaching neighbouring land or satellite storage facilities and with agreements such as muck for straw in place, then a permanent main could well be justified.

Often the cost of installing underground pipework isn’t as much as you’d expect – as ever the expense is in the fittings. I’d also recommend talking to your contractor to choose the most efficient pipework and connectors.

At what point do you decide to switch from umbilical to tankers? 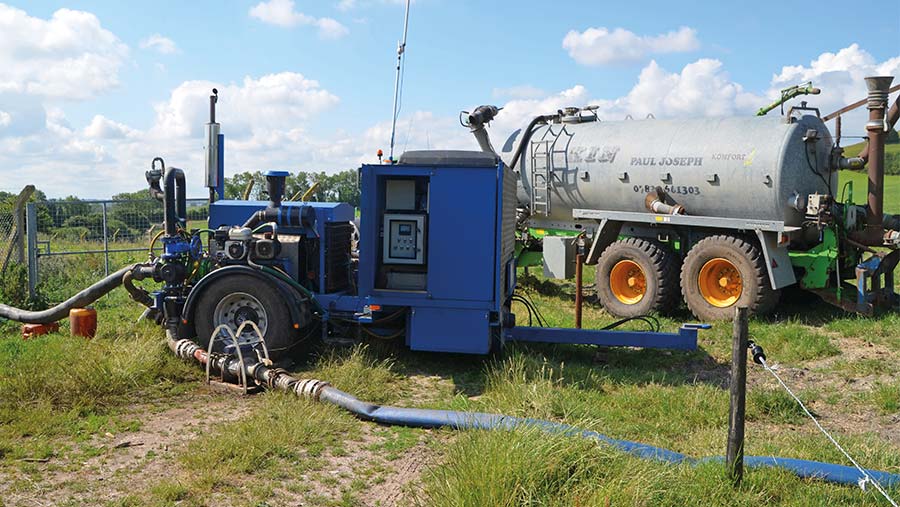 Home-built pumpsets use Perkins V8s paired with Bauer pumps with radio controls. With a permanent pipe into the lagoon, it’s simply a case of coupling up and setting the pipes out

We offer both options, but always try to encourage customers down the umbilical route because it’s so much more cost-effective, even if we end up running a huge distance with two pumpsets in tandem.

On top of that it’s so much kinder on the ground if you can avoid hauling a heavily laden tanker across it.

Ultimately, you need to do a proper calculation of what it costs to haul slurry to outlying ground with a tanker. Looking long-term is when a permanent main and satellite storage starts to stack up.

What about the storage side of things?

With the powers-that-be looking ever more closely at slurry storage, an increasing number of farms are being forced to invest in bigger, better storage facilities.

This is an area that needs a lot of careful thought.

First up, consider your bedding choices – we like farms using cubicles with cow mattresses and finely chopped straw or sawdust on the beds. If this is mixed with the parlour washings, it gives rise to a wet, pumpable slurry, or if put through a separator the liquid is easier to pump long distances.

The separated solid element can be taken away and spread on outlying land as this contains most of the P and K elements and is also a good soil conditioner.

If you’re going down the sand route, we’ve found the best way is to separate out the fibre and sand from the slurry by a simple separator, leaving a liquor.

This liquid needs to enter settlement tanks or pits so that any remaining sand can fall out of suspension, allowing the clean liquor to be pumped off without any sand content. If sand is present in the liquid it causes wear to the pump.

The tanks or pits will need a good, wide ramp to enable a shovel or 360 in to clear the sand at appropriate intervals. Sand is a costly system to operate for both farmer and contractor.

We also ask all our customers to clear the undergrowth around the lagoon and to mark the edge of it with fence posts to avoid any unwanted dunkings.

What about underground stores?

The principle of slatted shed floors with underground tanks makes plenty of sense, but you’ve got to think carefully about how they’re accessed. You need lots of good stirring points that can be got to from the outside to avoid disturbing the residents of the building.

More critically, they need to be deep enough and provide enough headroom to allow some sort of machinery access to clear out the heavy sediment that will inevitably settle over time. A skid-steer will do the job, but it will need a decent access ramp.

None of this is a practical proposition if bubbler pipework is installed. We’ve had instances where the store has filled to the brim with sediment, to the point where the slats have had to be lifted and a digger used to clear it out – inevitably destroying the bubbler system in the process.

While slurry towers were an incredibly popular option in the 1980s, there aren’t many put up now. They’re fine if they’re just used for yard scrapings and parlour washings but, when filled with muck from cubicle passages, they will inevitably bung up with bedding particles.

Our solution to that is the ‘Tele-stirrer’ – a machine that my mentor Robert Laughlin built, which uses an air-cooled Deutz engine with a special sump and oil pump to drive a ‘Mix-It’ stirrer.

It’s got brackets to fit every make and model of telehandler, so we can use the customer’s machine to hoist it up and over the side of the tower and manoeuvre the telehandler to mix the crust into the slurry.

Where best to position a new lagoon? 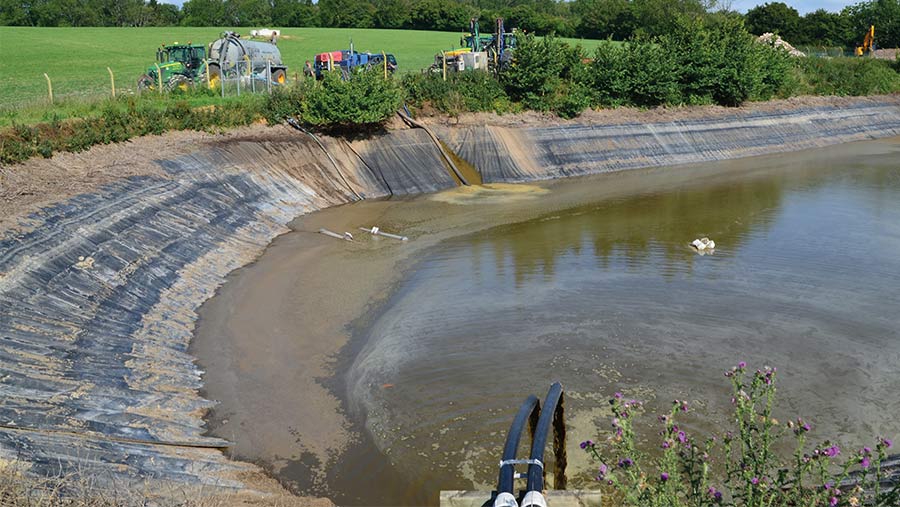 Having slurry storage close to the buildings might seem like the obvious choice, but it isn’t always best. If you can position a lagoon on high ground and send a constant steady trickle to it with a modest electric pump, gravity will be your friend when it comes to emptying the lagoon.

Roofs are good – if you consider you get rainfall of say 1cu m a year, then an open lagoon is going to gather that much extra water, which has all got to be pumped out. That said, as contractors, water is often our friend – the wetter, the better.

Floating covers offer a cheaper alternative and can help to limit ammonia losses and odour issues, but have the potential to make stirring awkward.

When’s the best time to spread?

Working within the Nitrate Vulnerable Zone guidelines, weather is the biggest factor. But this aside, timing applications with growth rates has a big impact on how well the nutrients are utilised.

Most of the nitrogen in slurry is slow to be released, so a good dose in February will produce decent grass growth throughout the season. The N, P and K values of slurry will pay for the spreading costs when timed to match crop growth.

We have tried every possible option for spreading, including dribble bars, splash-plates, trailing shoes, and injectors, but time after time we’ve gone back to the dribble bar and we now run five.

Run right, they’re as quick as a splash-plate but you don’t lose valuable nitrogen through volatilisation. They do the job as well as a trailing shoe, don’t contaminate the sward if the timing’s right and don’t have all those wearing parts.

Although injecting is good in principle, you can’t get the work rates and so ultimately, it’s prohibitively expensive for the customer. We’ve also found it can open up the sward too much so that you see less grass growth.

Consequently 97% of our jobs are done with a dribble-bar. 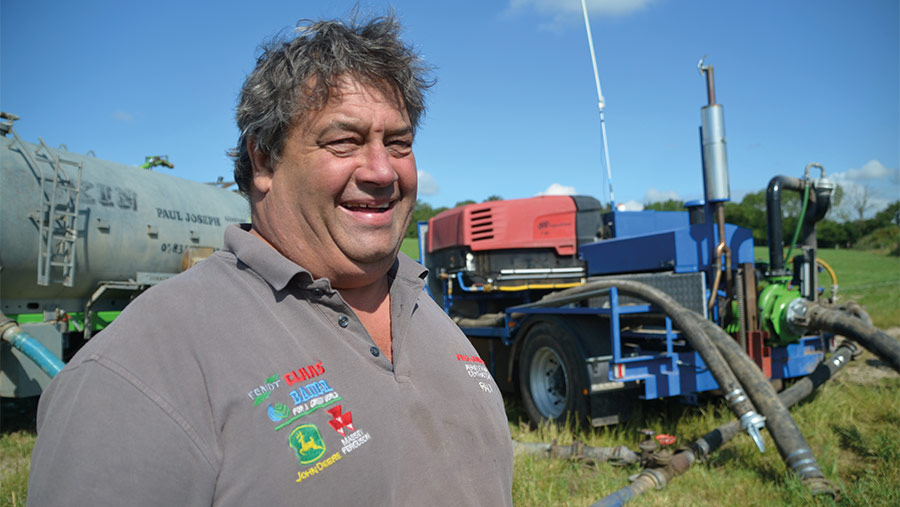 If you’ve spent the last 16 years pumping slurry, then you’d hope to know a thing or two about the job.

When Paul Joseph started out, umbilical slurry application was a relatively new concept. But he was lucky enough to a have an experienced hand to learn from.

Known locally as the godfather of umbilical – or the Professor of Poo – Robert Laughlin recognised the value of such an approach back in the early 1990s and started building his own pump sets.

With Perkins V8s borrowed from Massey combines grafted on to Bauer pumps, he developed a cheap, reliable standalone set-up that could shift serious volumes of slurry in a day.

“What Robert developed was revolutionary at the time,” says Mr Joseph.

“It got away from tankers damaging delicate soils over winter and meant farmers could use their slurry as a valuable source of nutrients for their growing crops. In Robert’s words, ‘it’s liquid gold’.”

“He’d been building his own design of pumpset which had proved to be really reliable – the Perkins V8 could happily rumble away at 2,000rpm.

“We still use the same basic design today. Equipped with remote controls, it means we don’t tie up a tractor on the pump, freeing up a man to reel up and set out hoses while the spreading tractor works away.”

Having known and worked with Mr Laughlin previously, Mr Joseph learned the ropes for a year before taking over the business in 2004, allowing Mr Laughlin to retire.