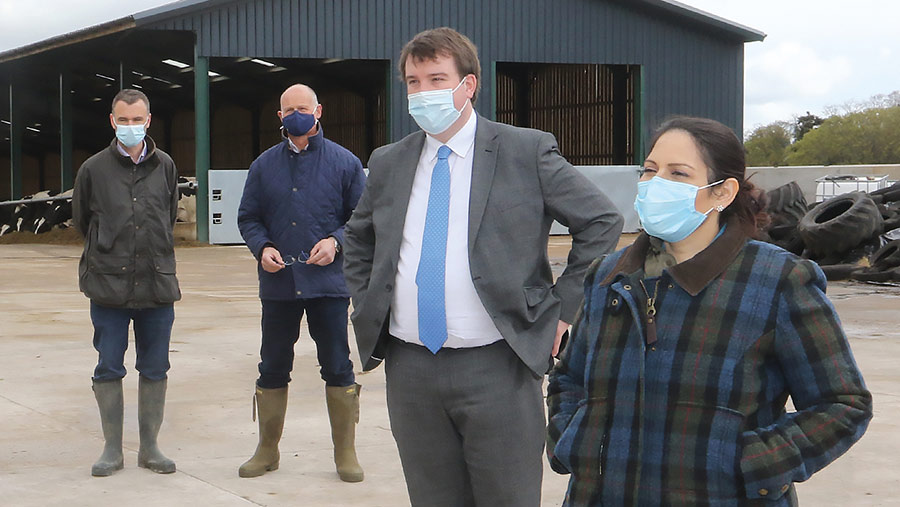 Priti Patel visited dairy farmers in Shropshire on Wednesday (5 May) to discuss solutions to the impending UK farm labour crisis.

Dairy farmers warned Ms Patel that they would struggle to recruit for vital roles such as milkers, and the industry was facing “a staff crisis” because many farm occupations are not considered skilled under the government’s new visa scheme.

Existing staff, who were living in the UK as of 31 December, are eligible to apply for settled status.

But after 30 June, new employees entering the UK must apply to the Skilled Workers Visa Scheme.

Under this scheme, only farm manager roles are considered skilled.

Farmers claim this will leave a huge labour gap that cannot be filled domestically.

Rob Bowdler, who milks 1,920 cows across two units, employs 18 full-time staff – 16 of which are Eastern Europeans.

He said he had recently recruited an EU worker who is only eligible to stay in the country for three months unless the government relaxes the rules.

Mr Bowdler, along with another six farmers in attendance, is calling for milkers to be listed as an eligible occupation under the scheme.

“The big frustration we have as an industry is [the government] class milking cows as not a skilled job,” he said.

“We believe it is a skilled job and it is discriminating the dairy industry.

“The industry is going to have major employment issues if we can’t alter this ruling.”

She added: “The approach the government takes to the economy has to be part of the wider labour market strategy.”

Ms Patel also suggested there would be a pool of British people ready to work when furlough ends in the autumn.

However, farmers are sceptical that British people want to work on dairy farms.

But Mr Bowdler added: “She understood our frustrations and she agreed agriculture was very important to the UK economy. She wants to get the unemployed working on farms.”