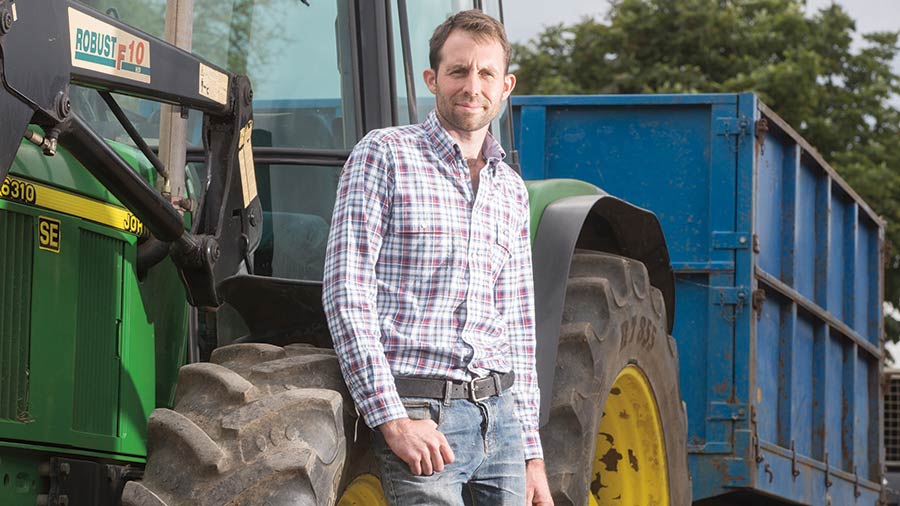 It’s a little over a year since 32-year-old Lee Smith and his wife Jenny took on their first farm tenancy at Wolvey Holes Farm in Cambridgeshire. Farmers Weekly has been finding out how they are getting on.

Nothing could have prepared Lee and Jenny Smith for the rollercoaster ride of farm management quite like the weather they experienced in their first year as Cambridgeshire County Council tenants.

This has posed challenges but also presented opportunities, becoming an important reference point for decision-making over the next four years.

At a glance: Wolvey Holes Farm

“I struggled to get all the winter crops in because we only got the farm in October and a lot of the land was in potatoes before, so it was quite wet,” said Lee.

“I got some in but turned a lot to spring cropping.” Despite the change of plan, the switch paid dividends.

“I was quite lucky because we had half an inch of rain just after I drilled the barley, so that came up well and did better than anything else on the farm.

“I managed to sell it with a malting premium, which I didn’t expect.”

Plenty to work on

It was third-time lucky for the Cambridgeshire farmer, who had missed out on winning a council tenancy for two years.

Lee had previously built a reputation as a good tenant on short-term grazing agreements, but competition for a five-year authority tenancy was stiff.

There were few surprises when taking on the farm, but plenty of work to do and changes to be made.

With 100 head of cattle alongside 250 breeding ewes, creating more stock housing was a priority and reinstating pole barns last used nearly 20 years ago was one of the first jobs.

“Finding the time and the money to do it has been hard but we’ve now built some yards for our cattle,” Lee said.

“There has been so much to do. When you feel you are just getting caught up with one thing you see that there are another 10 jobs to do.

See also: How compulsory purchase has ruined a dairy farmer

“I’ve been shearing and contracting to keep the money coming in which has helped.”

The frantic nature of year one could be eased in future by changes to drilling dates.

Lee said: “I used to go potato harvesting at this time of year but now I’m drilling wheat in case it turns wet again. This will make things better for us in the long run.”

Cropping plans have also been adapted after the couple were accepted into Countryside Stewardship.

“Spring barley will be a low-input cereal crop, which will be good for us because I have a blackgrass issue on some of the farm.

“We have over-winter stubble turnips for the sheep and buffer strips, nectar mixes, cultivated margins for turtle doves and winter bird feed, which all count.”

Lee says the tenant-landlord relationship with Cambridgeshire County Council has been good so far.

“We have not heard much [from the council] and they’ve let us get on with it,” he added.

“Whenever I have needed help they have answered my questions but I don’t think we’ve had any problems at all.”

After taking on the farm and marrying last year, the pair are preparing for their next big life event – the birth of their first child, due on 22 December.