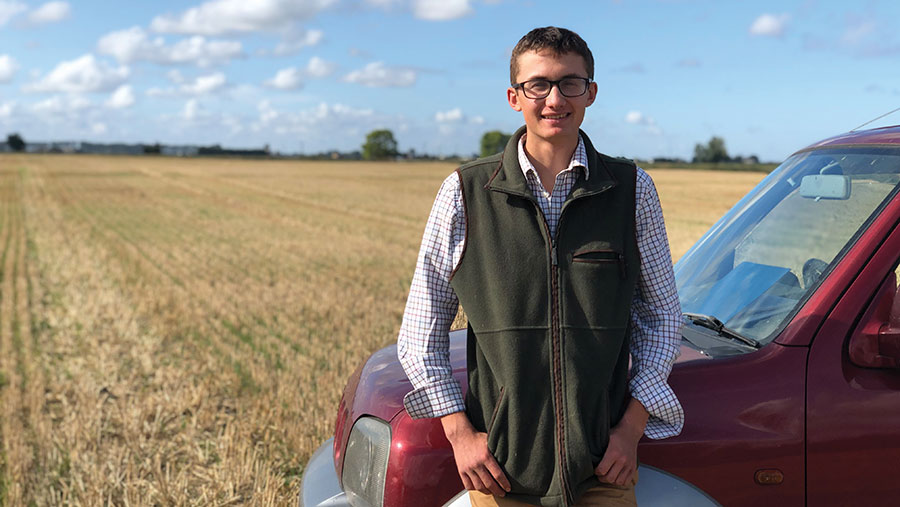 Joe Rabicano was just 18 years old when he was awarded a Norfolk County Council tenancy shortly after completing his A-levels in 2019.

One year on, he can feel even prouder of his achievements, having faced extreme weather conditions, a global pandemic and a huge learning curve.

Having gained experience helping on a number of different agricultural enterprises, he is now a self-employed farmworker, assisting a few different businesses in exchange for equipment use or practical assistance on his own holding, as well as doing some small-scale contracting.

Joe put 75 New Zealand Romney ewes to the tup in November and had a really good lambing experience, the majority of which he did himself, finishing with a 150% lambing percentage.

He plans to put 90 ewes to the tup this year and buy in replacements, while putting about 30 other ewe lambs to a different tup with the aim of joining the main flock next year.

Though he intended to add cattle to his enterprise, and had a £2,200 grant from the Henry Plumb Foundation to put towards equipment, this hasn’t happened yet.

“Various little things got in the way – the right piece of land for them has not really come along yet and I need to arrange winter housing, but I’m slowly putting things in place and working towards that,” Joe said.

“I will probably get stores first, a commercial breed like Simmental or Limousin or a Simmental Limousin cross.”

Joe had also planned to use contractors for most of the arable work, but after the exceptionally wet weather earlier in the year – with some of his acreage completely under water well into March – the contractors had plenty of larger farms to be getting on with come spring.

Instead, he invested in some equipment and borrowed others to complete all the ploughing and cultivation work himself, along with part of the drilling and bringing in a contractor for the spraying.

“I’ve now bought a sprayer, drill, power harrow, roller and I have access to a plough, So if I can get a cheap combine, I hope I won’t need any contractors next year,” he said. “I work for some good people who are quite flexible with me, so I should have the time.”

Joe was invited to interview for the holding after attending the council’s training course for prospective tenants.

“It’s all about putting together an overall business idea that’s profitable, sustainable and that the council likes,” he said.

“Once you get it, there is a responsibility to roughly follow that plan. But the wettest winter in history scuppered several ideas, so you have to be adaptable and the council knows that.”

When looking for further advice, Joe has a number of mentors he can go to, generally local farmers, and says he is lucky so many people have taken him under their wing.

“If I make a success of this farm and get bigger and become a proper farmer – I don’t consider myself that yet – I would hope to be able to help others in the way I have been helped.”

The poor weather affected Joe’s plans to grow crops, resulting in him selling hay and haylage in small bales to equestrian customers instead.

He also grew just under an acre of cauliflowers and cabbages to sell locally, which he said would never have occurred to him in normal conditions.

“Overall, it’s been a really tough year. It was always going to be because everything’s new – it takes time to adjust and I’ve still got a lot to learn, but I have got through it. The business is in a good position and I have got the equipment now and the funding to take on more land as it comes along,” Joe said.

“The best part has been harvesting the crops I have grown, getting the first crop in the barn was a fantastic feeling.”

The Covid-19 lockdown prevented Joe being able to share equipment or get help as easily, but he recognises that his lifestyle and being used to working alone meant he was less affected than many.

However, with the export market being such a large part of lamb trade, he is concerned about the impact of future lockdowns in European countries.

Next year will see the addition of winter wheat, fodder beet and sugar beet, and the continuation of hay, haylage, vegetables and the expansion of sheep numbers and acreage.

The biggest challenge has been the arable side, where plans are so weather dependent, as well as learning how to manage a growing business with lots of different things happening at the same time.

“The first year has gone really quickly and I’m pleased to get it out of the way,” Joe said. “I’m going into next year with a lot more knowledge, understanding and certainty, so I’m hoping it will be easier.”