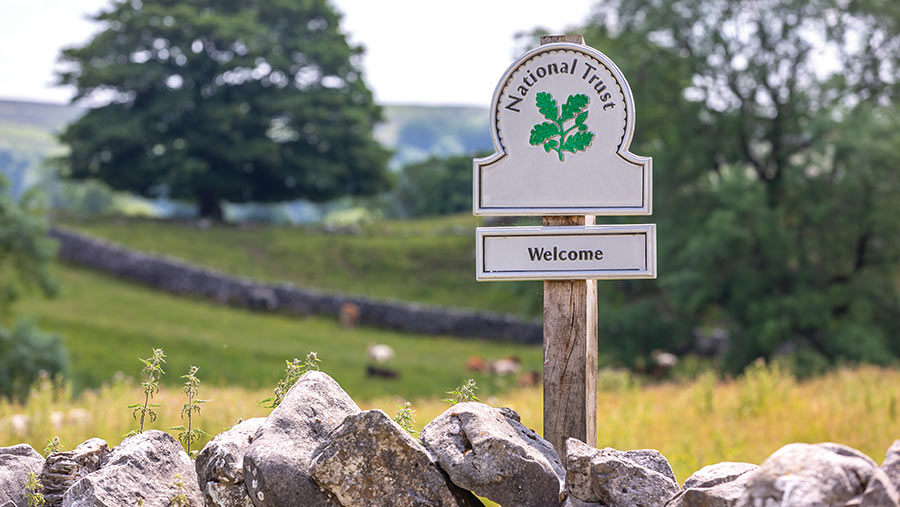 Prioritising environmental targets over food production, forcing farmers to give up traditional agricultural practices and undermining the badger cull are just a few of the criticisms levelled at the National Trust.

The Trust has been criticised for years by tenants and their representatives – with its own tenants’ association saying in 2013 its helpline was taking an increasing number of calls about disputes. The Trust later threatened to cease funding the association.

In 2014 a joint letter to the Trust from the Tenant Farmers Association (TFA) and the Tenants’ Association of the National Trust (TANT) said poor management at a local level and a lack of partnership with farm tenants was making it hard to meet the set conservation objectives.

See also: Scottish tenant farmers tell of upheaval at being forced out

The Trust came under fire in 2019 for not allowing badger culling to take place on its land, and reportedly refused to discuss the issue with farmers, with cull leaders stating this stance was hampering efforts to eradicate the disease in England.

At the beginning of this year, the Trust announced plans to plant 20m trees on its 618,000 acres of land over the next 10 years in an effort to reach net zero carbon emissions by 2030 – a project that would cost up to £100m.

It is this increased commitment to the environment over food production that appears to have driven the numerous complaints and concerns from the Trust’s farming tenants, many of whom have found themselves caught between giving up traditional agriculture and their income or losing their holding completely.

Despite stating in its annual report for 2019/20 that working closely with its farm tenants was key for delivering its environment strategy, farmers have told Farmers Weekly that they are never consulted about new agricultural policies and instead are merely told what to do without any negotiation.

The report shows the Trust acquired several farmland properties during the year – some gifted – including 77 acres in Cumbria, 594 acres in North Yorkshire and 120 acres in Devon.

However, tenancy opportunities come up infrequently and as of July this year 273,142 acres (44%) were managed in hand, according to the report.

Due to the impact of Covid-19, the Trust is forecasting a loss of £200m in income for 2020/21, which has already threatened some difficult changes for its tenants, including the association’s farm advisers being furloughed.

Farmers Weekly spoke to several National Trust farm tenants from across England about their relationship with the landlord, all of whom wished to re­­­main anonymous, for fear of repercussions.

One based in the North West said due to Covid-19’s financial implications, the region’s entire maintenance team was also going through a redundancy consultation, with the Trust intending to subcontract maintenance work to save money.

With several jobs already waiting to be completed on his holding, he fears this could make the situation even worse.

However, his main concern is whether the Trust is in future going to stipulate exactly how his farm should be run, without any consultation.

He said the particulars of a recently advertised holding included requirements that the ground be mob grazed and multi-species leys used.

“They don’t seem to have an overarching plan, they’re always trying new things – usually environmental ideas, not for productive agriculture – and don’t seem to know what’s best,” the farmer said.

“We have presentations on mob grazing and min-till and then the next one will be on deep ploughing.”

A second tenant, in south-west England, has already been instructed to transition his mixed farm to a holding that promotes rewilding, with little advice offered from the Trust.

The farmer said the charity first told him he would need to make changes to how his farm operated if he wanted to retain his tenancy just six weeks before it was due to end.

When asked if they saw any future for a mixed family farm on that holding, representatives of the Trust said no, he said.

A Trust spokesman has since said there is a future for mixed farms, but this may apply to carbon, nature and flood mitigation, rather than just livestock and crops.

Policy managers appeared to have been inspired by a visit to Knepp Castle, a 3,500-acre holding in Sussex that is at the forefront of the rewilding movement, but have little idea how to turn a vague strategy into practice, the tenant said.

There was also no acknowledgement of the contribution the farm was already making to environmental goals.

Agents talked enthusiastically about restoring organic matter despite wanting to significantly reduce the farm’s stocking levels, limiting its ability to return manure to cropped fields and have grass in the rotation, he said.

Instead, the focus would be on taking down fences between fields and woodland and running ‘safaris’ for members of the public.

“They would not give us any indication of how they wanted it to be farmed beyond talking about extensive livestock and a small amount of arable,” he said.

Others have told Farmers Weekly that the Trust’s desire to take farms back in hand has affected tenancy prospects.

On one occasion, when a tenant on a mid-sized farm passed away, it was hoped the farm business tenancy agreement could pass to his grandson, who had the financial backing of his family.

However, though the young man ran the holding successfully during the transition period, the Trust denied him the opportunity to continue and took the farm back in hand.

This management has consisted of creating water courses, beetle banks and wetland areas, and subdividing fields, while using the farmhouse for holiday lets, Farmers Weekly has been told.

Similarly, the Trust has recently taken a 618-acre upland farm in Snowdonia back in hand after scrapping its management scholarship, citing financial difficulties.

In another example, an arable tenant was told to stop growing cereals and turn the land into permanent pasture, with a wetland habitat project currently in limbo due to lack of funds.

A Trust spokesman said: “In some situations, arable reversion may be sought where there is a need to protect features, restore habitats or reduce soil erosion. But these decisions will always be taken on a local basis with varying factors taken into consideration.”

NFU tenants forum chairman Chris Cardell said he was aware that National Trust tenants were being approached to carry out significant environmental schemes.

“Farmers are passionate about doing their bit for the environment, but some of these proposals are quite extensive and could drastically affect the productivity and viability of the holdings,” Mr Cardell said.

“The NFU does support environmental outcomes, but they should be carried out in negotiation with the tenants and with a flexible approach.

“It’s clear that the Trust is dealing with financial difficulty as a result of Covid-19, but it is important they maintain tenanted farm holdings that are viable and produce rental income.”

With a number of staff redundancies likely to be on the way following its consultation, TANT is concerned about the Trust’s capacity to manage its let estate and whether rents may be increased in order to help make up the year’s losses.

The TANT spokesman said: “We are concerned that the Trust’s changed approach, along with Brexit and the recent pandemic, means its tenants are in a more precarious position than ever.

“We are aware that the Trust is insisting farmers change their production, but these changes must be tempered against the effect they have on the farmers’ livelihoods. The Trust also needs to consider any negative impact of its policies on the nation’s food supply.

“Long-established farmers with old agricultural tenancies must not be forced to change their farming methods.”

National Trust tenants are often keen to help deliver wider public benefits, but it is not always appreciated by the landlord that this comes at a cost, says George Dunn, TFA chief executive.

If the organisation is unconcerned about making a commercial rent from its holdings, a set rent should be provided at the tender process and the decision made based on their environmental plans, says Mr Dunn.

“It is simply wrong to expect tenants used to farming on their own account in order to look after the holding and pay rent to suddenly change direction simply because the landlord has now decided to take a different approach,” he said.

“Any change must be negotiated, not forced or coerced. As many National Trust tenants have experienced a lack of repair and investment from their landlord, it is understandable that they might react negatively to then being asked to do more for the environment.

“The Trust’s charitable status does not give it a pass in terms of carrying out its obligations as a landlord.”

Turning to the issue of bovine TB, the TFA has criticised the National Trust for taking a blanket approach to the issue of wildlife control by withholding consent from tenants wishing to be involved in badger culls.

“Its stance lets significant areas of infected badgers remain, allowing its land to become a TB disease harbour and reducing the efficacy of the cull,” said Mr Dunn.

“Instead it should make decisions on a case-by-case basis following applications from tenants, rather than its current unreasonable, undermining and unscientific approach.”

“Bovine TB is clearly an issue that causes concern. We continue to work with farmers on non-lethal measures to reduce bTB, including biosecurity and badger vaccination.

“We want to encourage our tenant farmers and land managers to deliver more for nature and carbon where possible. Changes in tenancies can be one option to set out these objectives.”

In response to the suggestion that its farm policy changes may result in farmers struggling to make a living or having to leave the farm, it said:

“In some situations that may be the case but in many others there may be opportunities to integrate nature and carbon sequestration into or alongside a farm system.

“The Trust is advocating the new ELM [Environmental Land Management] scheme payments to financially support nature and carbon and other public goods as part of this.

“In certain circumstances, rent adjustments may be offered to compensate or negotiate changes to tenancies.”