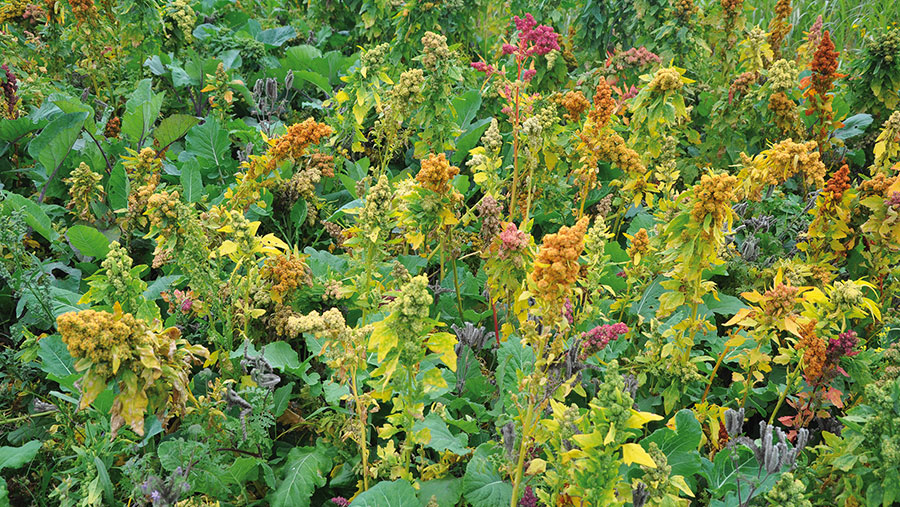 Wild bird cover under a range of environmental scheme options has its roots in game shoot management. A couple of decades ago, little was grown other than for game cover.

Suitable mixes provide benefits that include important small-seed food sources for farmland birds, especially during autumn and winter, and flowering plants for insects such as bees, butterflies and hoverflies.

“Whatever their purpose, good establishment and growth is important. Current stewardship arrangements, worth £640/ha, are designed to cover income foregone, and crops have to be good enough to satisfy an official site visit.

“We hope to see more of a profit element within the Environmental Land Management scheme, where really good crops attract higher payments to encourage uptake and to optimise the environmental benefits.”

Single-year mixes are often based on cereals and include quinoa, red/white millet, dwarf grain sorghum and spring cereals. Maize is excluded from environmental schemes due to its limited wildlife benefits.

Two-year mixes based on biennial plants such as kale will flower through the summer in the second year and set seed by the autumn, providing small seeds until mid-February or beyond. These mixes also reduce costs and ease management.

Under environmental schemes, the aim is to establish a mix of six or more small seed-bearing crops in blocks or strips at least 6m wide, covering 0.4-5ha, sown between 15 February and 15 June.

One of the pitfalls is trying to sow too early, says Dr Draycott. “Wait until soils are warm to encourage fast establishment and growth – late May or early June is usually ideal.”

A good seed-bed with a suitable rate of P and K fertiliser plus a minimum of 50kg/ha of nitrogen will promote rapid growth of the cover, helping to smother the competition and ensure a good seed supply later on.

“This enables you to alternate a broad-leaved herbicide programme with a grassweed-based one. If you are growing maize for holding and driving birds, you can plant a kale-based wild bird cover next to it and alternate them, providing clean ground for both crops every other year.”

Where weeds are less of a problem, a combination of triticale, linseed, kale, quinoa and dwarf grain sorghum, with a very low rate of chicory, will provide excellent cover with year-round benefits for a minimum of two years, he says.

Waiting for soils to warm before drilling will help kale grow away from flea beetle damage. Pests such as rabbits, hares and pigeons also need to be controlled, by exclusion or scaring where possible. “Second-hand fleece used for vegetable growing offers very good protection early on,” says Dr Draycott.

To measure the success of wild bird covers, Dr Draycott is asking growers to take part in the annual Big Farmland Bird Count each February to help identify which birds are using them.