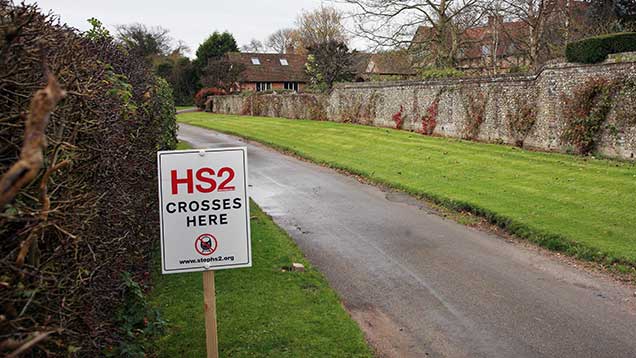 An overhaul of capital gains tax is urgently needed to prevent farmers on the HS2 route facing additional stress and pressure on their livelihoods, says the CLA and group of high-profile MPs.

This means that if a farmer wanted to replace a demolished building by rebuilding it on their remaining land, or by investing in their own land to become more intensive, they could face a tax bill of up to 28% on the value of the compensation.

To avoid this, they are forced to buy new land and build on that, or buy an already constructed property elsewhere.

On top of this, the legislation requires them to invest their compensation money one year before the compensation is agreed or up to three years after if they are to avoid CGT.

With land rarely coming up, this was likely to cause a scramble locally, said Andrew Shirley, chief surveyor at the CLA, as neighbouring farmers rushed to buy land before the CGT cut off.

A “corridor” of inflated land prices around the HS2 route was likely to develop as a result, he said.

This would saddle farmers with additional worries, since compensation rates were set according to the value of the land at the time of the deal and so were likely to fall short of what was needed to buy equivalent land in an inflated local market, he said.

To add to the pain, no interest was payable on late payments, said Mr Shirley, and it might sometimes take months or even years before compensation came through.

Farmers would be forced to buy land elsewhere, which would add costs to service the land away from the main holding and prove impractical for some, such as dairy farms, said Mr Shirley.

The CLA and eight MPs are calling on the government to allow landowners to invest their compensation money in their own land without having to pay capital gains tax and for the CGT relief to be extended to five years after compensation is agreed.

“People are very worried they might have to pay tax,” said Mr Shirley. “It’s putting a huge amount of stress on people who are trying to make sure they still have a viable business and something they can pass on to their children.

“Having all of that put up in the air is all pretty dire. If we can get these changes to capital gains tax, it will be one more thing people won’t have to worry about,” he said.

Eight MPs have signed a letter to the government asking for changes to the CGT legislation. They are:

Ivan Banister is an arable farmer in Northamptonshire who could be subjected to compulsory purchase of up to 50ha of his land for HS2.

Under current tax rules, Mr Banister can only reinvest his compensation money the year before he receives it or up to three years afterwards.

But to buy land near his holding will be almost impossible with this limited timescale, since his neighbouring landowners affected by HS2 will also be looking to buy land locally within this short period.

It will be doubly hard, due to the uncertainty of for how much and when his land will be purchased, and how long it might take before he is paid.

The Prideaux family owns the Doddershall Estate in Buckinghamshire. Their gatehouse lodge is currently let, but it would be demolished to make way for HS2.

Under existing legislation, they would have to pay CGT if they rebuilt the lodge on their own land.