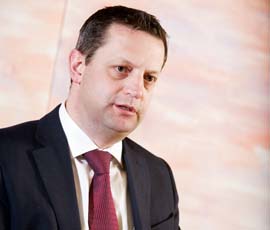 Farmers in Wales have been told to embrace the opportunities presented by CAP reform and not consider change a threat.

Wales’ deputy farming minister, Alun Davies, told NFU Cymru’s autumn conference that farming businesses that were willing to react and adapt to change would be the most profitable in the future.

“I know a lot of people find change unsettling but we have to see this as an opportunity not a threat,’’ said Mr Davies.

“We will approach CAP reform in a way that’s positive and seeks to create a flourishing industry.

“If we see change as a threat we will fail but not only will we fail but we will deserve to fail.’’

He wants to stimulate ‘a conversation’ on CAP reform among Wales’ farming industry in the coming weeks and said he had no intention of fixing the Welsh Government’s position until that conversation had taken place.

“I want something that influences and shapes the approach of government,’’ he said. “It would be wrong for the government to start with a series of fixed positions.’’

A debate on CAP reform proposals will take place in The Senedd on 29 November and the Welsh Government will publish a document before the end of the year outlining areas that need consultation and debate.

It will publish its views in the early spring.

Mr Davies said a strong CAP was essential to the future prosperity of rural Wales but warned that radical change would jeopardise the future of farm businesses.

He favours a gradual change. “I’m in favour of evolution not revolution,’’ he added.