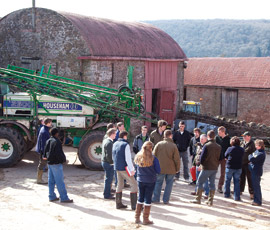 One of the worst-kept secrets in the farming and food supply industry is our inability to attract enough capable, ambitious school leavers and graduates to fulfil the rising number of job opportunities, writes Farmers Weekly columist Ian Pigott.

Careers in Farming and Food Supply is a cross-industry initiative that will set about changing attitudes and aspirations towards our numerous careers on offer, from research science through production agriculture and the supply industry to land law and finance, to name just a few.

We know from research carried out by Royal Agricutural Society of England that more than 60,000 new entrants are required over the course of the next 10 years. Some estimates suggest that this number may be considerably higher. At a time when UK unemployment is rising and job prospects for school leavers becoming tougher, the timing could not be better for our industry to mount this campaign.

The focus will be to break down stereotypes and awaken children to an industry that is exciting, dynamic and vital to the future of the planet.

But before we could start developing our strategy, we first needed to undertake a detailed piece of research to determine the current opinion and knowledge of our industry among 12-18 year olds.

Most people associated with farming and food supply would probably be of the opinion that attitudes, perceptions and our industry’s profile have all improved considerably in the past decade. Sadly, the research has illustrated, this is not necessarily the case.

By interviewing a sample of nearly 2,000 children in rural, suburban and urban surroundings, we were able to benchmark their views on careers in agriculture and its associated industries against other careers. This information has been distilled down so that we can understand where the knowledge gaps are greatest, which age groups are most receptive to change, and where we can best focus our campaign.

Children’s career decisions are often based on their interests and the subjects where they perform best. Our research has highlighted that quite often children will discriminate against a career on the basis of very limited and outdated information. This is particularly true of farming and food supply.

Many children assume that the work will be repetitive and boring, poorly paid, and a destination for those of low academic ability.

Unsurprisingly, a career in agriculture is very near the bottom of the list in terms of jobs that they may consider (see chart). We also learnt that to many children, the word ‘agriculture’, has negative connotations. As one child said, “I suppose it sounds less attractive just because it’s agriculture.” Other children were not clear what the word agriculture meant, but still felt that a career in the industry wasn’t for them. Where are we going wrong?

The responses made it very clear that there are several areas where our industry needs to bring itself into line with other industries so that it can be compared. Levels of pay are not lower in farming and food supply than other industries, but expected remuneration packages are not publicised as they are elsewhere. Children assume that this is because the pay is poor. The same can be said about the lack of a clearly defined career progression. If the career ladder isn’t visible, children conclude that there isn’t one. All other industries make such progression pathways very transparent to children. After job interest and salary, this is the single most important factor for children when choosing a career.

It was very interesting to learn that some school subjects carry more kudos than others. For example, science and maths are associated with more prestigious careers, such as business and marketing, engineering, technology and design. But not farming.

For some bizarre reason farming is far more likely to be pigeon-holed with geography than it is with science and maths. And geography does not carry the same prestige.

Surprisingly, careers involving the environment fare worse still than farming. The reason for this was eye-opening. Our target audience has been turned off environmental careers because they regard previous generations as having pillaged and abused the planet so badly that the damage is irreparable, and thus careers were seen as a dead end.

The children expressed a much better grasp of what careers in medicine, business and marketing involved and a slightly better idea of roles within construction and engineering than they did of any career associated with farming. What is very evident is that children are inclined to make a career choice based on very little knowledge. There will be a disproportionate influence of family and close family friends. Careers advisers do not carry the influence – nor in many cases do they carry the knowledge – to advise children in a way that one would expect. We hope to be able to influence this in the future. 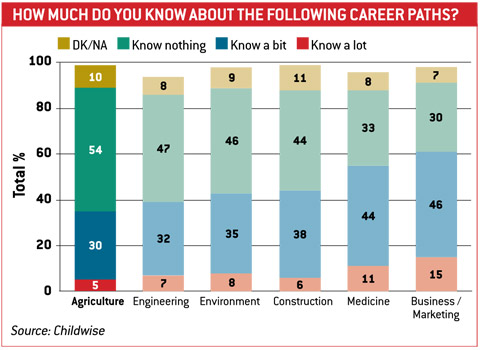 On the positive side, this lack of quality advice and steering means that there is plenty of opportunity to improve on what is being delivered at present. Starting with a blank sheet of paper we will be able to offer constructive advice, in a form that is both palatable and engaging to children.

Those that felt a career in farming or food supply wasn’t for them had various reasons, ranging from, ‘low status’ to it being seen as a ‘generally less progressive industry.’ There is a perception that you can only enter the industry at ‘the bottom’ unless you have a farm of your own. Many do not realise that advanced qualifications may enable them to enter at a higher level, nor are they aware of the broad spectrum of careers, they cannot see beyond the stereotype farmer, wellies and tractors. Few see agriculture as an academic option, in fact any specific reference to farming or agriculture within a career description is an automatic turn off.

So the challenge is huge, but we must see this as a positive. Children are dismissing agriculture as a career without understanding the opportunities. The table below highlights the gulf in knowledge. 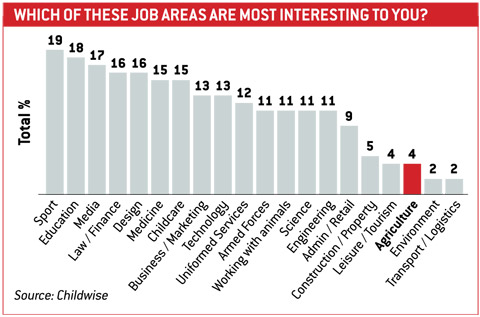 What we found fascinating and encouraging was the ability to change children’s attitudes towards careers in farming and food supply by using case studies. After being shown case studies, 60% said that they were very interested, which contrasts with only 23% who earlier showed any receptivity.

We are in the process of developing a website that will address these challenges. In the first instance it will primarily be focused at year 11 students, as our research shows this age group to be the most receptive to new career avenues. There will also be particular focus on the ‘influencers’, ie parents and teachers. We will be helped by the STEMNET group, which creates opportunities to inspire young people in science, technology, engineering and mathematics. STEMNET ambassadors will be visiting schools to talk to our target audience. With their aid we can change attitudes, and articulate how exciting, rewarding and dynamic the prospects can be.

This initiative will enlighten many children of the wonderful opportunities our industry has to offer. These children hold the key to the future prosperity of farming and food supply, so it is vital that we get behind this campaign, and contribute to its future success.

If you are interested in becoming a STEMNET farming ambassador, find out more at www.stemnet.org.uk

Ian Pigott is a Farmers Weekly columnist who farms 700ha in Hertfordshire. The farm is a LEAF demonstration unit, with 130ha of organic arable. He is also the founder of Open Farm Sunday.