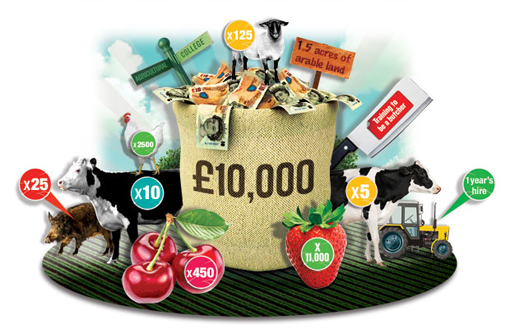 Resourcefulness is an instinct that you’ll find in the people behind any successful operation, not least in farmers across the globe. Few other jobs require such a variety of practical and business skills, courage and determination.

So if you’ve got what it takes – and you’re aged 18-25 – now’s your opportunity to shine. This December, one of 10 young people will walk away from the Farmers Apprentice with a £10,000 cash prize to kick-start a career in farming. The money might not build a ready-made business, but we hope for one resourceful individual it will at least help start one.

Below are some simple ideas of what £10,000 might equate to, however they are just figurative. We know that less than a hectare of arable land isn’t going to start you a farm business, nor are 125 sheep, a year’s education, a market stall or a website. But that’s not what this is about.

We’re looking for someone who can do more with less, invest cash wisely, reinvest and grow capital. When starting out, cash is king and to win the Farmers Apprentice you’ll have to prove you’re as much an accountant as you are a farmer.

Take, for example, Michael Blanche, a first-generation sheep farmer in Perthshire. After eight years of seasonal lets and a long-distance relationship with his 500 sheep, he now has his own tenancy. Integrity, persistence and a bit of bragging were all part of the courtship, but it was taking the opportunity to travel that eventually paid off.

A Nuffield Scholarship allowed him to learn from farmers around the world and return to his sheep flock with the technical knowledge and confidence to develop the business. The tenancy followed shortly after.

On the subject of making it on to the farming ladder, Michael says: “People who don’t make it tend to blame a scarcity of resources – lack of time, lack of money, lack of knowledge, lack of opportunity – when in actual fact it is quite often down to a lack of resourcefulness in the individual.”

Buy flesh not metal” is one piece of advice that Michael has always heeded. When asked what he would spend the £10,000 prize on, the answer shot back: sheep. “I think it’s important to focus on something that doesn’t take a lot of working capital to operate. You need productivity with a low cash demand,” he said.

Resourcefulness comes in many guises, though, and for 28-year-old pig farmer Lucy Hollands it was an interrogation of the local area that brought her opportunity. In five years Lucy has gone from office worker with a few hundred pounds savings to managing 350 rare-breed pigs on 40 acres of woodland with her own farm shop. She has proven you can start your own farm business from scratch, and with one simple philosophy – if you don’t ask you don’t get.

Starting out with 50 rare-breed pigs in a friend’s woodland, she quickly figured out that the hardy British breeds worked well in the low-input woodland environment. “Financially it’s the most viable option because woodland is cheaper to rent than arable or pasture,” she says. “Pigs in woods” is also a great story for customers to buy into. Managed in a New Zealand-style grazing system, the result is productive assets run on low working capital – a perfect cash generator.

But the business needed to grow. After being turned down by numerous banks, she wrote letters to businesses and landowners in the area. The result: a private investor and 40-acre woodland tenancy on a nearby estate. Some people might say she struck lucky, but in truth this is the kind of resourcefulness that makes first-generation farmers tick.

Lucy wanted her business to run from farm to fork. “I knew from day one the business was only going to work if we could get to a retail level,” she says. Selling at farmers markets and to pubs and restaurants was never going to be enough because other people were taking a margin. Now with a farm shop, she can sell her pork products at a premium and also act as vendor for neighbouring farmers offering a range of produce that she claims competes with the weekly supermarket shop.

Ask her how she would have spent £10,000 of investment, and she points straight to the essentials. “I would have rented more land sooner and spent it on stock and infrastructure. You’ll also need a little bit for marketing as well, because it doesn’t matter how good your farm is, if no one knows who you are and what you’re doing then there’s no point,” she says.

It all sounds a bit easy doesn’t it? But Lucy advises that, “you have to go in with the utmost respect for what you’re doing”. She regularly works 19-hour days and thinks farming is the hardest industry you could possibly work in, but also the most rewarding. “To be able to say, ‘Yes I’ve grown that, I’ve produced that and I’m helping to feed the country’ is something really magical.”

For someone aged between 18 and 25, with the right mindset, £10,000 could go a long way, but it’s all up to you. We’ve provided the platform, now you need to take the stage. The clock is ticking and the judges are waiting for your entry videos. Lights, camera, action…

Step 1 Put the bootcamp dates in your diary. You need to be available from 22-27 October.

Step 3 Get your camera out and in 60 seconds show us why you’re awesome. Don’t forget to smile.

Step 4 Upload it to YouTube by 14 September and send us a link to your video. Job done.

Step 5 Wait to hear if you’re one of the lucky 10 picked for bootcamp.