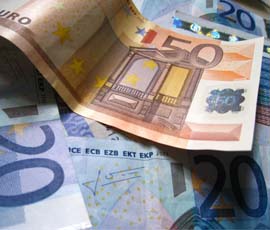 Arable margins could fall by one-third this year due to the relative strengthening of sterling and increased overheads, HSBC has warned.

Since the bank produced its Forward Planning booklet at the beginning of this year, the exchange rate had moved from €1=87p to nearer 80p, which could reduce single farm payments by 8%, or £11,750 for a typical 650ha farm, head of agriculture, Allan Wilkinson, said.

In addition, there was upward pressure on rents and costs linked to the US dollar, particularly machinery and fertiliser, which added another 15%, or £56,486, to overheads, he said.

“Our calculations show that the surplus on a combinable crops farm could be hit by 29% due to a combination of upwards pressure on costs and fluctuating currencies,” he said. “Such a shortfall means it is imperative that farmers must consistently reassess their budgets and ensure they are taking action to protect their business.”

Hedging exchange rates was one way of managing that element of risk, but Mr Wilkinson said he was surprised how few farmers had chosen to do so. That could be because some failed to appreciate the impact of exchange rate fluctuations on the farm business, while others felt rates would come back to the more favourable levels (89p) seen over the past two years, he said.

“There’s nothing to stop the rate coming back to previous levels, but at the moment I can’t see it will. The pound is only going to get stronger relative to the euro, which will make the situation worse. Farmers need to manage this exchange rate risk.”

But while cost of production was increasing and the gap between the best and worst-performing farms had grown to about £50/t, arable commodity prices remained relatively firm and Mr Wilkinson was positive about the overall prospects for arable businesses.