Arable farmers across England are being urged to adopt a range of measures to help benefit the countryside through a new voluntary scheme launched last week.

The Campaign for the Farmed Environment, put together by the NFU and other key industry partners, is designed to head off the threat of a compulsory scheme.

To succeed, it must show the environment is benefiting at least as much under a voluntary scheme as it did under set-aside, by meeting key targets by June 2012.

Persuading farmers to adopt voluntary land management practices is not going to be easy, Andrew Clark, NFU head of policy services, admits. “It’s asking a lot of the farming community. This is about collective responsibility, and that’s the real challenge.”

But he is convinced it will work. “A voluntary approach can deliver the best stewardship, is very flexible and will encourage everyone to do their bit. It’s practical and makes sound business sense.”

A compulsory scheme, on the other hand, would have adversely affected Entry Level Stewardship and wouldn’t have delivered the best quality benefits, says Mr Clark. “Cross-compliance is also very expensive to administer.”

While most of the debate about the environmental value of set-aside centred around birds, it had much wider benefits, Mr Clark says. To reflect that, CFE targets three key themes – water and soil protection, farmland birds and farm wildlife. 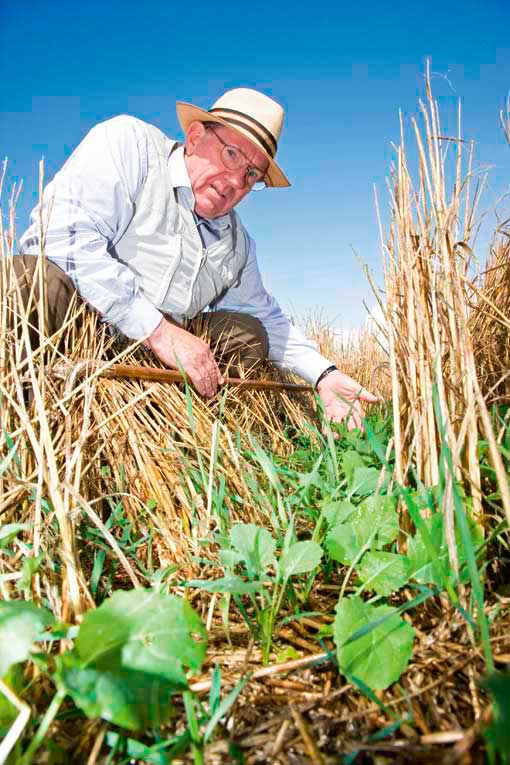 Farmers will be encouraged to use a combination of Entry Level Stewardship, uncropped land and increased voluntary environmental management to deliver the improvements.

A target, agreed with DEFRA, has been set for each. “The aim is to double the uptake of choice environment options, such as conservation headlands and grass strips, within ELS, increasing them by 40,000ha,” says Mr Clark.

“But only the options within the table count towards that target. They have been chosen because they offer high wildlife value but have lower uptake within ELS – for example, compared with over-winter stubble.

“We also intend to retain the area of uncropped land at 179,000ha, and to increase the amount of high-quality, voluntary environmental management over three years by 30,000ha.”

“Buffer strips, permanent fallows and uncropped land all helped to buffer watercourses and protected soils from erosion, and are very much part of the new scheme.

“For farmland birds, we have included options that provide winter spring and summer feed, as well as breeding habitat. And pollen and nectar sources were good for wildlife, and we wanted to replicate this in the CFE.”

While the total area under CFE won’t match set-aside, Mr Clark believes the environmental benefits are potentially greater. “In this scheme we are looking to promote high-quality management in the right locations.

“Having taken advice from scientists working for the British Trust for Ornithology, RSPB, Natural England and the Environment Agency, we know this will deliver much more compared with the accidental benefits of set-aside.”

A wide array of management practices (see table, right) have been established to help farmers deliver. “E” options are those already available in the ELS scheme, while “C” options are voluntary. Some are duplicated, so farmers who have achieved their ELS points can switch to C references after that, to avoid confusion.

“We have also chosen options that are a bit more experimental or offer more flexibility, so might be more attractive to farmers,” says Mr Clark. “For example, we have taken account of the fact that there are things you can do in 0.25/ha that, if you get it right that will have huge benefits for bumblebees, but that would not be eligible for ELS.”

Mr Clark hopes this sort of flexibility will help persuade farmers whose initial ELS agreements are ending to return to the scheme, a task made more difficult by DEFRA’s decision to no longer allow management plans to count towards ELS points.

“That can be a problem for some farmers. But there remains a good incentive to renew or take up stewardship. ELS is worth £30/ha across the farm, and we have included some high-value options that can be worth hundreds of pounds a hectare on parts of the farm that could never hope to make that sort of return when cropped [see table below].

Pollen and nectar mixtures for use with horticultural crops

Selective use of spring herbicides

Enhanced management of SRC [willow or poplar only]

“Farmers are also telling us that they need much more information on the various ELS options. So we and Natural England have made a much greater effort to highlight the areas that will deliver the goods, and hopefully it will now be easier to choose the right ones for a particular farm.

“My view is that with a little bit of individual effort, everyone succeeds. If every farmer chose one extra ELS or voluntary option, that would make a massive difference.”

Good access to expert advice is crucial with such an ambitious scheme. About 41,000 farmers who farm at least 10ha of crops in more than 20 key arable counties will be specifically targeted, though all English arable farmers will be encouraged to take part.

“This will be a national campaign with a local personality,” Mr Clark says. “Activities will be co-ordinated at county level. Local liason groups chaired by local farmers are already being established. There will be three or four to a county to provide tailored advice.

“We are also training 1500 advisers – agronomists and business advisers that farmers will already know. And we shall establish beacon farms that will demonstrate best practice relevant to the farmers in that area.”

All farmers will receive a farm record through the post in January. “This will set out the campaign, and will contain a record sheet – just one table – so farmers can record the options they are already doing.”

Progress will then be monitored on one in 400 farms but Mr Clark stresses that farmers will not be penalised for slip-ups as would have happened under a compulsory cross-compliance scheme.

“We are confident that praise, rather than penalty, is the way to deliver stewardship, so we are not interested in field-by-field data-keeping. If a strip is 2.5m wide rather than 3m, we are not going to throw the farmer out of the campaign, nor will he be fined. That’s got to be better for the farm business, and better for the environment.”

Midlands Barometer farmer Tony Reynolds, who farms 247ha acres at Thurlby Grange near Bourne, Lincolnshire, and 1000ha near Melton Mowbray, Leicestershire, took part in an ELS pilot but dropped it when the points system was changed.

However, he will be taking up a range of options under CFE. “I think it’s smashing,” he says. “There is a degree of practicality built in to this which has been missing from other schemes. There are some real positives – a good selection of options, so there’s something to suit everyone, whatever type of arable operation they run.”

Overwintered stubble options are especially appealing, as are grass buffers, some of which are already installed as part of the Catchment Sensitive Farming initiative. “The whole thing ties together what agencies, farmers and wildlife want,” says Mr Reynolds. “I have high hopes for it.”

He already has many of the options in place, under OLES.

“Being negative, CFE does sound like another ‘compulsory voluntary’ scheme, such as ACCS or VI,” Mr Barr says.

“However, we have to respond to what our customers want and we, like most farmers, care about wildlife and soils and a want to help anyway.

“I am a fan of farming the main part of the field for plentiful food and margins, corners and poor fields for wildlife. This will help us do this with little effort, so it’s well worth it.

“Not being too pedantic about marging widths and the like is a major step forward. All of us should get involved to discourage a return to an inspection and fine basis.”

For further information about targets, themes and voluntary measures as well as details about local activities, visit www.cfeonline.org.uk