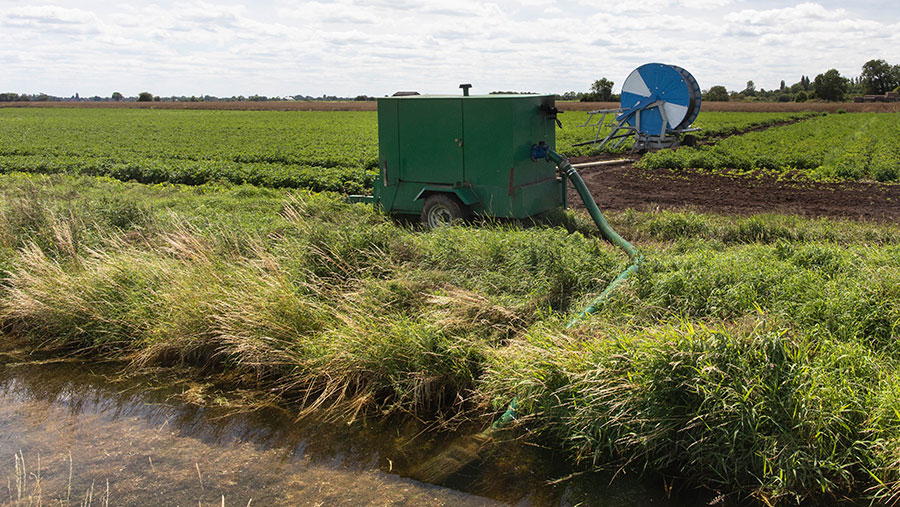 A Cambridgeshire farm business has been ordered to pay nearly £8,000 for illegally abstracting water for its potato crop.

And the company repeated the crime less than a year later – despite knowing they were already under investigation.

See also: How irrigation is changing on an AHDB potato demo farm

The illegal abstractions occurred at a number of locations in Waterbeach and Ramsey Heights between 29 June and 20 July 2018. Another was observed in July 2019 at Ramsey St Mary’s.

On another visit, an Environment Agency officer said a pump was running for eight hours because no one from the company could attend to turn it off. Nearly a month later, when a total ban on abstraction was in place, another officer observed badly connected abstraction pipes “gushing” with wasted water.

In total, officers from the Environment Agency and the internal drainage board witnessed illegal abstractions six times. Each time, the company either had no licence to abstract, or broke the conditions of its licence by abstracting when restrictions were in force.

Andrew Raine, from the Environment Agency, said the company “recklessly and repeatedly” flouted the rules. They disadvantaged fellow farmers by “selfishly taking more water than they were allowed, and also putting the delicate ecosystems of our rivers at risk”.

In an interview, a representative for Dennis (Haddenham) Limited admitted the offences but claimed they didn’t understand the terms of their licences.

The court heard that any farmer should have predicted the potential for restrictions on water use, given the dry conditions – but the company admitted it failed to review its licence.

During the hearing, the defence expressed their remorse and said the farmers have now amended their policies and procedures to ensure compliance with their licences.

Dennis (Haddenham) Limited was fined £4,000 for four breaches of its abstraction licence, contrary to the Water Resources Act 1991. It must also pay costs of £3,680 and a victim surcharge of £181.