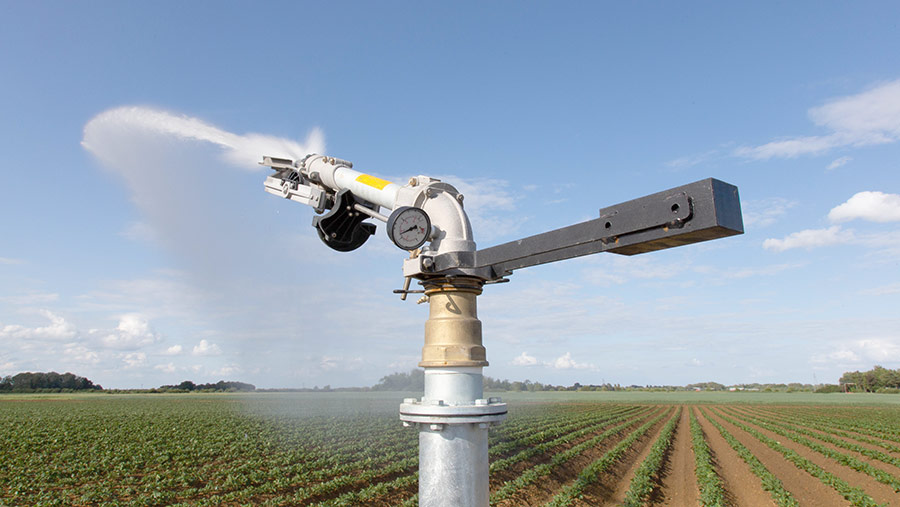 The economic and environmental costs associated with irrigating 440ha of potatoes at AHDB’s Strategic Potato (Spot) Farm North prompted a rethink on the best way to maintain product quality in the face of an increasingly unpredictable climate.

Keen to bring those costs down and prepare for the future, the existing irrigation system, based on diesel engines and guns, was torn apart and replaced, recalls farm manager Will Gagg of RJ & AE Godfrey in North Lincolnshire.

As a result, the operating costs of the new system are now running at almost half what they used to be.

Water use hasn’t increased, but crop quality has improved – something that is a priority for a business supplying the packing market, where skin finish is paramount.

Only two diesel engines remain, the rest are electric. Three pumping stations were upgraded to be able to run 10 reels between them, all electric, and give them the capacity to have 18 reels running day and night.

“We can also run an extra three on top of that if we’re very busy,” he says.

Last year, the pressure was on for a while. Running multiple reels in a field was possible, so the team kept up with crop demand in the very dry conditions.

Importantly, the farm is now applying less water on a more frequent basis, with more even water distribution having a beneficial effect on crop quality.

“That’s essential for this business,” explains Mr Gagg. “Whenever we make a decision to help reduce our costs of production, it mustn’t have a detrimental effect on quality. That applies to all of our enterprises – whether it’s potatoes, pigs or peas.”

An irrigation trial taking place on the farm as part of the SPot farm programmes is allowing Mr Gagg to compare three different methods – drip, boom and gun – to assess any differences in yield, crop quality and water use.

In the first year, just 3ha of each was installed. Differences in scab control or yield weren’t seen, he reports, but he points out that the crop did receive 42mm of rain at just the right time.

“The difference we did find was with crop quality and even potato size, where drip irrigation had the advantage,” he says. “It also used 15% less water than the other methods.”

The crops were visually better where drip irrigation was tested, which he believes is the result of not hammering the plants with water.

The downside with drip irrigation is the cost, he adds. “Being able to justify the cost of it is a big step. We will trial it again on a slightly larger scale in 2020 as we need to be able to do it for under £30/acre.”

Putting down the tape proved to be more straightforward than he had feared, although it was dry at the time. “It’s no harder to use – we had to do the odd repair of the tape. At harvest, tape retrieval pulled the odd potato out and did put a wheeling in.”

The costs are being calculated and results from the trial will be presented at the SPot Farm North results day on 15 January 2020. Further information on the day can be found on the AHDB website.

Having failed to find the right probe to help him with the task on the farm’s two distinct soil types, he also makes good use of weather forecasts to help inform him when to stop irrigating.

“We irrigate according to the soil water deficit, the crop growth stage, the weather and market demands,” he says.

“I know the fields, so with a bit of digging around, we make a plan.”

He will, however, be trialling a new probe in 2020. “If there is a tool that can improve on our current method, I’m keen to give it a go. We’ll see how it does.”