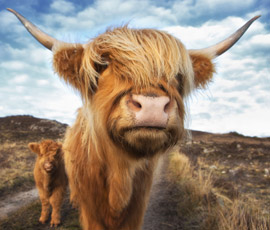 Coupled payments will be vital during the transition period from historic- to area-based payments in Scotland, according to farm minister Richard Lochhead.

Speaking at a CAP modelling conference in Edinburgh last week (Wednesday 17 April), Mr Lochhead called on all member states to allow 15% of the budget to be paid as coupled payments.

He confirmed the Scottish government would use the voluntary coupled support (outlined in the CAP reform proposals) and said there was scope to extend coupled beef support to include beef-bred calves from the dairy herd.

The plea for increased coupled payments was also backed by the Scottish Association of Meat Wholesalers.

Speaking at the association’s conference on Saturday (20 April), president Alan McNaughton said high prime cattle and sheep prices were squeezing processors’ margins and consumers had been shielded from these price rises at the retail level.

“What’s going to happen when consumers have to pay the full price increases to support ex-farm prices?” he asked. “We need a sensibly applied support structure designed to give producers confidence to reinvest without driving retail prices above and beyond what consumers will pay.”

“We need a sensibly applied support structure designed to give producers confidence to reinvest without driving retail prices above and beyond what consumers will pay.”
Alan McNaughton, president Scottish Association of Meat Wholesalers

He warned failure to come up with the right support package would decimate the industry and leave Scotland as an “almost invisible player” in the international marketplace.

Mr Lochhead also called for more support for industry entrants, saying National Reserve rules must be altered to include all entrants, not just those under 40.

In addition, it was important entrants were treated fairly and put on a level playing field from the beginning of the new direct payments system – this was something the Scottish government would be lobbying hard for, said Mr Lochhead.

“By contrast, I’m less convinced that the young farmer top-up is a good idea,” he added. “With tighter budgets, it’ll be essential that we target our money effectively.”

The European Commission has proposed a mandatory 25% top up support for the direct payment to young farmers during the first five years.

Lochhead speaks out in favour of SFP capping