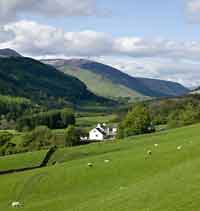 Farmland rents in Scotland could potentially be reduced following a landmark ruling by the Scottish Land Court, the Scottish Tenant Farmers Association says.

The case centred on a disputed rent review for the 470-acre Moonzie farm near Cupar, Fife, where the Paterson family failed to agree rent with landlord Richard Morrison-Low, at the November 2008 review date.

A number of complex legal issues were raised in the case, but one of the court’s most important findings was its opinion that the single farm payment was not “part of the earnings of the farm”.

It said that tenants such as the Paterson’s had to use hectares to match their SFP entitlement and meet the necessary conditions for payment, but recognised that this could be done by leasing other land. There was a ready Scottish market in “naked acres”, which could be rented for about £6.50 per acre, the court said.

“The issue of SFP is of critical importance not only to this case, but to the level of rents across the whole tenanted sector in Scotland,” the court said.

“Where SFP is included in a budget it is typically found to be at a level that makes it the dominant element in the ‘profit’ of the whole enterprise. If such payments are not to be included, there will inevitably be a significant fall in rents.”

STFA chairman Angus McCall welcomed the ruling. “It is fortuitous that the court has released its findings after the traditional May term date, which will give the sector time to gather its thoughts before the next round of rent reviews in November.

“The farm rent should reflect the earning capacity of the farm and it should allow the tenant to run a viable business from his farm while giving the landlord a fair return on his investment.”

He said predictions that the decision would stop landowners from letting land were irresponsible and would cause further damage to an already “fragile” landlord tenant relationship.