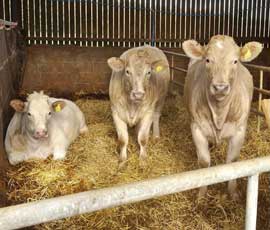 Beef and sheep producers can cut both their carbon footprint and costs by achieving optimum daily liveweight gains, says EBLEX.

The third publication in the organisation’s environmental roadmap for the English beef and sheep industry identified three other areas producers should improve on to raise profits and lower their carbon output.

• Selecting for slaughter at optimum weights and specifications

Based on surveys of 131 beef and 57 lamb producers, these results build on the second Environmental Roadmap’s findings. These showed that beef producers could be 50p/kg better off for every 5kg of CO2 equivalent reduction in greenhouse gas (GHG) emissions per kg of liveweight.

Sheep producers could gain even more, with every 1kg CO2 equivalent reduction per kg lwt in GHG emissions giving a 28p/kg improvement in enterprise margin, according to the 2010 report.

“The lifecycle for beef and sheep production is relatively long and we will start to see the results of the work we have been doing to date filter through over the next few years. We are committed to supporting English producers with good advice which will drive greater efficiency in their enterprises and ultimately improve their emissions,” said Chris Lloyd, EBLEX industry development manager.

Specialist dairy beef producers Jim and Sarah Broadwith keep GHG emissions low on their mixed farm in Bedale, North Yorkshire, by using rapemeal instead of high carbon soya and brewer’s grains. This, along with regularly testing soil for phosphate and potash levels to avoid overusing fertiliser, also maximises profits, according to Mr Broadwith.

“The cattle fit well into our farming system. They supply manure for the arable crops and are out grazing during peak arable workload. From a profitability point of view, the cattle also buffer the effects of volatile grain and potato prices, which is very important to us,” he said.

“The fact that this has delivered a low carbon footprint is an incidental benefit which we are really pleased about.”