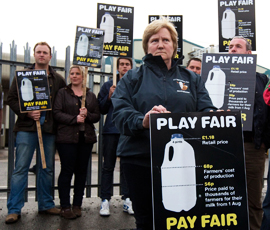 Milk buyers are failing to provide enough information on how milk pricing policies are structured, according to a coalition of dairy industry and farming bodies.

The Dairy Coalition, which was set up to fight for fairer milk prices, said buyers still had to do more to help ease the crisis in the industry, despite recent price rises.

In a statement released after meetings with processors, retailers and milkmen, the Dairy Coalition said a lack of transparency about where money was going and who was getting what from the market, was a clear emerging theme in the ongoing talks.

At the meeting in Stoneleigh, Warwickshire, on 18 October, the industry group also highlighted the need for clearer country of origin labelling and further price rises to ensure the UK dairy industry could move towards a sustainable future.

“I’ve met retailers who claim to be paying more for milk and processors who claim their margins are non-existent, but at the end of the day, farmers are barely 0.5p/litre better off than six months ago, yet their costs of production have risen by at least 2p/litre.”

NFU dairy board chairman Mansel Raymond, added: “All we want is a fair deal for the consumer, the farmers and those in between. As a coalition we will be closely monitoring dairy markets in the coming weeks. We need to know we are getting our fair share out of the market.

“Dairy farmers are telling us they are on borrowed time – costs are spiralling, banks are becoming less understanding and all the while we have the health and welfare of cows to maintain through what is set to be a very difficult winter financially.”

And chairman of the NFU Scotland milk committee, Gary Mitchell, said: “Our members are telling us no milk buyer can be allowed to get away with holding back cash owed to farmers. The bills are mounting and patience is fraying. Whether on a liquid or cheese contract, dairy farmers need to know that improvements in the market are immediately translated into farmgate price rises.”

Read more on the milk crisis