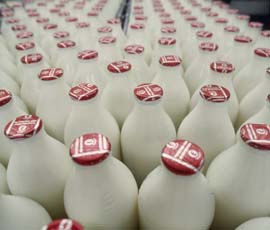 A dairy farmer who has ended his contract to supply milk to Arla UK has been told he will get just 53% of the levy cash he invested.

Lancashire farmer Allan Park, invested almost £15,953 in Arla via levy payments deducted from his milk cheque over the three years he supplied milk to the company. He stands to recoup a total of just £8,455 or 53%.

All farmers supplying milk to Arla Foods UK have to be members of Arla Foods Milk Partnership, a direct supply group – 50% funded by Arla and 50% by the farmers. To date 1,400 supplier farmers have invested £15m.

Mr Park told Farmers Weekly that he had expected to receive payments to recoup all of the money that was taken by Arla’s investment arm, Milk Partnership Limited (MPL), during the time he was an Arla supplier.

“We were told we would receive in March the first of three repayments – to be made over the next two years,” Mr Park said.

“But I am now told that I will only receive about £2,800 in each of those three payments,” he said.

In a letter, MPL has informed Mr Park that the amount of money paid back to producers is dependent upon Arla’s share value.

When Mr Park began supplying milk to Arla the share value was 54p and then rose to 71p. But he has now been told the value has been set at just 41p and that is the figure upon which his refunded levy is assessed.

“There’s no chance we’re going to get what is fully owed to us. I have lost an opportunity to re-invest in my business,” said Mr Park.

But Jonathan Ovens, chairman of the Arla Foods Milk Partnership, said the amount farmers received after ending their contract was a matter for MPL as part of the joint-venture agreement.

Asked what prospective farmer members were told on joining Arla, Mr Ovens said that the concept for farmers investing in their processor was explained as part of the recruitment process.

“In the joint venture agreement there is a formula for calculating the value of shares in Arla UK on an annual basis based on the company’s performance,” he said.

He added: “In line with other dairy companies our performance has not been as good as it has been in the past and so the value per share has fallen and that must be reflected in the payout.

“Farmers have had at least three or four communications as well as invitations to three meetings where we have explained this. If they didn’t attend the meetings I would accept there may be farmers who are not aware of the methodology of how this is calculated. MPL has gone to great lengths to explain this.”

The value of the shares has changed annually and therefore it is possible that a farmer investor who leaves Arla could receive an investment balance higher than the initial investment. However, to date this has not been the case, Mr Ovens added.