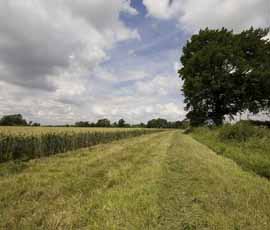 Farmers will find it harder to meet environmental stewardship requirements under a government plan to make its entry-level scheme more effective.

Natural England has confirmed plans to cut points from key environmental farming options under an overhaul of the Entry Level Stewardship scheme.

The points-based scheme requires farmers to obtain 30 points per hectare from a range of management options to secure payment for environmental work.

But two of the most popular options – covering hedgerow management and buffer strips  – face being reduced. Points for completing Farm Environment Records will also be cut.

The aim is to encourage farmers to adopt so called in-field options that have bigger benefits for wildlife and the environment, rather than less effective edge-of-field options.

Managing sides of a 100m hedge was worth 22 points. But it will be worth just 16 points to farmers signing up to agreements starting from January 2013.

Similarly, a farm environmental record currently worth 3pts/ha will be worth just 1pt/ha.

Details of the revised points tally have been posted on the Natural England website. Further information is expected to be announced at the Cereals Event on 13-14 June.

The changes apply to agreements starting from January 2013. They do not apply to farmers in existing current agreements.

The additional points will now need to be found from alternative options – which Natural England admitted could make it harder for farmers to meet scheme targets.

They are the result of a DEFRA project called Making Environmental Stewardship More Effective (MESME).

“We appreciate that the changes may make it more difficult as it will be necessary to consider a wider range of options,” says the MESME report.

“This will mean a net increase in management that should secure greater environmental concerns.


NFU countryside adviser Claire Robinson said the timing of the changes would lead to confusion.

“If growers want to start an agreements before these changes come in they must have their application submitted by 1 October – that doesn’t leave much time.

“With many growers coming into the busiest period of the year the timing will make it difficult to complete those applications.”

“A lot of farmers are considering how CAP reform will impact on environmental schemes and trying to assess what to do next. These changes will only add to the confusion.”

Changes are also being made to the organic entry-level and higher level schemes but full details are yet to be announced.